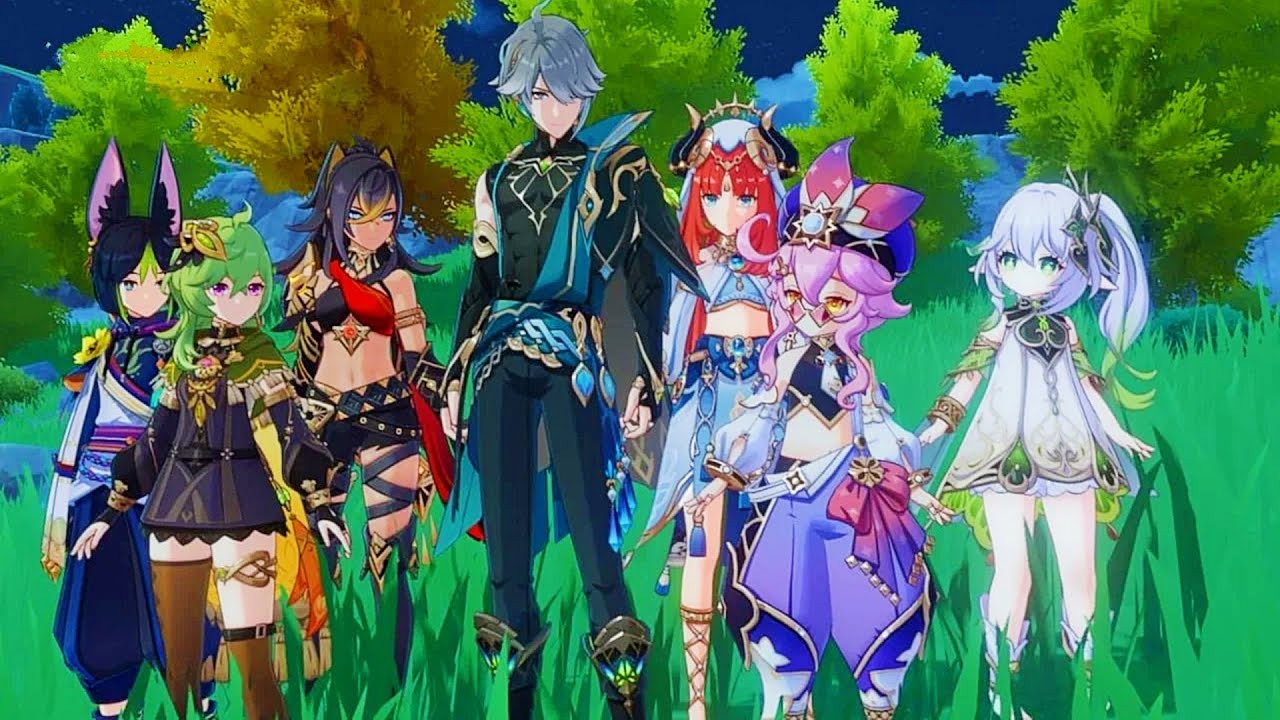 Ahead of the Version 2.8 update for Genshin Impact, several members of the community have uncovered leaks highlighting a cast of new Sumeru characters.

Fans have been speculating that Sumeru will arrive in Version 3.0 because of the previous pattern of Liyue arriving around the beginning of Version 1.0 and Inazuma being introduced in 2.0, although nothing has been officially confirmed by miHoYo yet. Regardless, the excitement for a new region and new set of characters has the Genshin Impact community quite excited for what’s to come.

The Genshin impact leak community is very passionate about the game and as such the leaks they uncover end up being accurate most of the time. The latest leaks these players have found include an image showcasing a full cast of seven Sumeru characters. These characters are, from left to right, Tighnari, Collei, Dehya, Alhaitham, Nilou, Dori, and Nahida.

Higher quality images have been uncovered for an upcoming new Dendro character who was previously described as a “Su-like” character in reference to another miHoYo game called Honkai Impact 3rd. The Dendro character is believed to be named Al haitham and will likely be one of the first Dendro characters that will be introduced into Genshin Impact.

A full breakdown of Al Haitham’s character model from all angles was also uncovered and showcases all details of his design.

A character named Tighnari who has animal-like ears and a very fluffy tail is also suspected to be one of the first Dendro characters arriving in Genshin Impact. Tighnari is suspected to be a five-star Dendro Bow character. His official splash artwork, an up-close image of his face, and a video of his gameplay were shared by the Genshin leak community.

Official splash artwork was also uncovered by the Genshin leak community for two characters named Collei and Dori. Collei is suspected to be a Dendro Bow character while Dori is believed to be an Electro Claymore character. Both characters are also believed to be four stars.

Pictures of Dori in action with some kind of Electro buddy that likely appears when she utilizes her Electro skillset were also shared within the Genshin community as well as a video of her gameplay.

A full image of Collei provides a better look at her in the game. A short video that was shared also showcases the character in action and seems to confirm that she is indeed a Bow character.

Descriptions of the suspected ability set for Tighnari, Collei, and Dori were also shared on the Genshin Impact leaks Reddit page.

The small girl located at the far right of the collection of Sumeru characters is believed to be the Dendro Archon. Her name is suspected to be Nahida. No information on her skillset or star rating beyond her being a Dendro character has been uncovered thus far.

While no further images of the other two characters featured in the group of seven Sumeru characters have been uncovered outside of the group photo, information surrounding their abilities and names has been shared.

Both characters’ Elemental Visions are featured prominently in the image which means they are very likely actually Pyro and Hydro characters while the other information surrounding them is less definitive.

A chart has also been circulating in the Genshin community collecting and confirming the suspected Elemental abilities and weapons for each of the uncovered Sumeru characters. A few other upcoming characters who may or may not be tied to Sumeru are also featured on this chart.

All uncovered characters are suspected to be officially released during Version 3.0 of Genshin Impact. This means that players can expect to see them all in-game sometime before Version 4.0, but that it also may be quite some time until the characters make their official debuts.