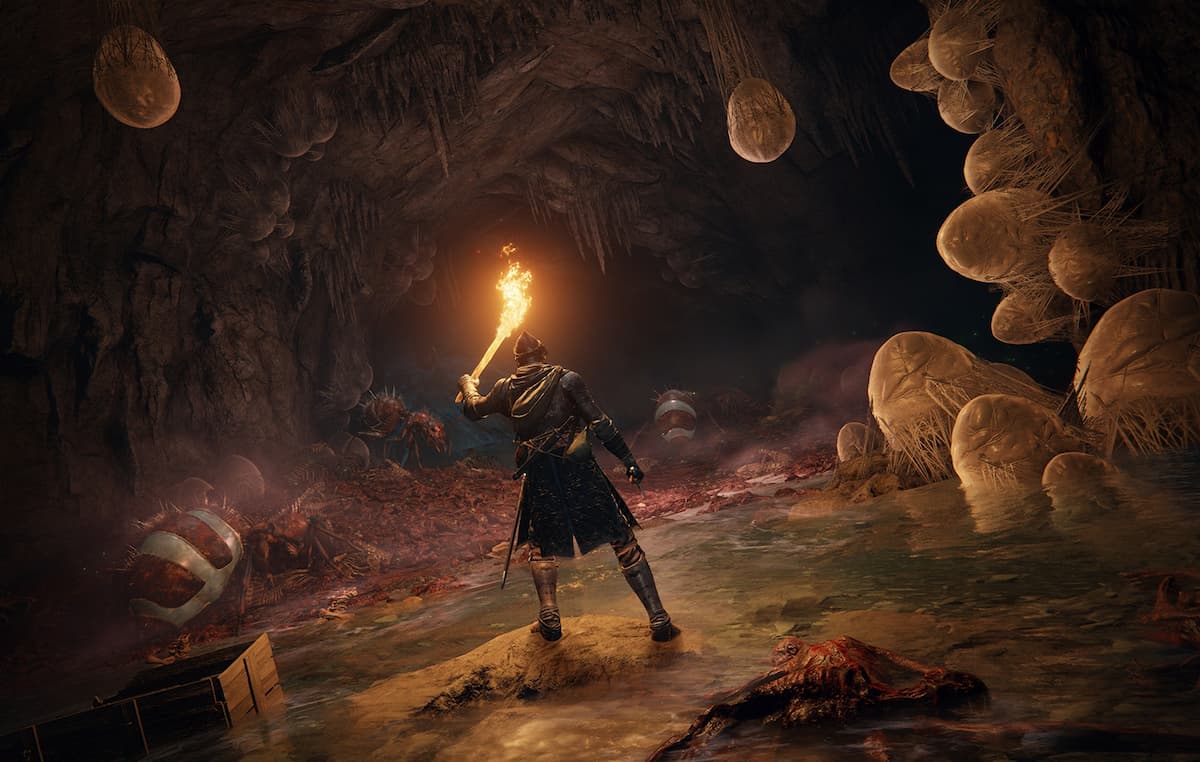 FromSoftware games are jam-packed with a vast variety of unique places to visit and explore. Oftentimes, these areas are hidden away and contain special items and equipment or challenging bosses. Elden Ring follows a similar schematic in that there are some nicely tucked away areas off the beaten path for players to stumble into.

Many of these areas have unique attributes and also fall into a Miyazaki mould. They contain elements meant to frustrate the player or make the space even more challenging than it otherwise would have been. These locations are great places to find hidden items to help one on their journey through the Lands Between. But for many players, one place in particular is playing hide-and-seek a little too well.

The Lake of Rot and the Grand Cloister are two underground locations in Elden Ring. While they are two separate areas, they are connected. One must traverse the Lake of Rot to reach the Grand Cloister. Within these areas are valuable items and challenging foes that would end up on any player’s accomplishment list. Here, we’ll go over where these locations are and how to get there.

The Grand Cloister is one of the last locations players can reach when traversing the underground Ainsel River.

To reach this river, players must go down the Ainsel River Well found on the eastern side of Liurnia. This is just to the east of the Church of Vows and slightly north of the Carian Study Hall. When players arrive at the well, the doors will open and they will be able to venture down a lengthy elevator.

From here, there is a split where players can go left or right through the ruins of Uhl and eventually reach Nokstella, the Eternal City. Turn back south down a waterway to reach the beginning of the Lake of Rot.

The Lake of Rot is a massive lake of Scarlet Rot that must be traversed to reach the Grand Cloister at the end. Visible on the map above, it’s clear that it is no quick journey. And without access to Torrent in this location, players are near forced to be afflicted with Scarlet Rot. Those who need to know how to cure Scarlet Rot can check out our guide here.

Traversing the Lake is rather simple and most, if not all, enemies can be avoided. At the southern end of the lake is the Grand Cloister, a popular location many are looking to reach.

The Grand Cloister is a rather small location covering a shrine dedicated to a deity worshiped by a large handful of Lesser Kindred of Rot.

What to do at the Grand Cloister

The small covered shrine is a destination many players want to reach. Here, there are a few items players will look to obtain.

The first is the Scorpion’s Stinger. While it’s not a legendary armament, this special dagger is one of the few weapons that can inflict Scarlet Rot onto enemies. It is upgraded by using Somber Smithing Stones and can be reinforced to +10.

The second is a Golden Seed that is dropped by a non-boss version of an Ulcerated Tree Spirit. This Spirit can be found on the north side of the Grand Cloister. Once players go down into the area, they can double back to the north under the Scarlet Rot waterfall to get this monster to spawn.

The third is a Remembrance. With some investigating, players will find a coffin that they can get into. Coffins like these are a FromSoftware favorite. They are well hidden and encourage the player to explore and attempt to interact with as much of the game as possible.

The coffin will take players to a boss area where they can challenge Astel, Naturalborn of the Void. Those looking to complete Ranni’s questline will have to defeat this legendary foe to progress the story and reach the Moonlight Altar.

These are some of the key things players should look to do in the Lake of Rot and Grand Cloister locations. Traversing this area is a requirement to complete Ranni’s questline and players must defeat Astel to reach the Moonlight Alter.

See how Astel, the Naturalborn of the Void stacks up against other key bosses by checking out our Elden Ring boss difficulty list.