Status ailments are commonplace across FromSoftware titles. Players come across these effects from a variety of sources, ranging from boggy swamps, fighting NPCs, or even applying these effects to their own attacks.

Whether it’s blood loss, poison, or even deathblight, these status effects can be frustrating for all Elden Ring players, regardless of progress. One of these, in particular, is stirring up trouble for Tarnished in The Lands Between — Scarlet Rot.

How to cure Scarlet Rot in Elden Ring

Scarlet Rot is a status effect unique to Elden Ring. Similar to the toxic status effect in previous FromSoft titles, Scarlet Rot causes rapid health loss over a long period of time and is very dangerous when combined with taking on enemies.

While Scarlet Rot does not last as long as Poison, another status effect in Elden Ring, the player loses health significantly faster and can find themselves in a fatal situation. There are two ways to cure Scarlet Rot and reduce build-up:

The first option is more accessible to most players. A Preserving Bolus is an item that is found throughout The Lands Between and can even be crafted within Elden Ring’s crafting system. These fuzzy-looking lumps of cave moss can eliminate a player’s scarlet rot build-up and cure the rot itself. However, it does not reduce the rate scarlet rot accumulates.

Where to get them?

A handful can be found in the Shack of the Rotting next to the Rotview Balcony site of Grace in the northwest part of Caelid. Three can be purchased from the Nomadic Merchant just east of the Astray from Caelid Highway North site of Grace for 2500 runes each. 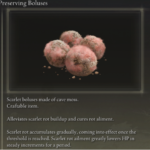 Alternatively, players with the Armorer’s Cookbook [6] can craft Preserving Boluses via the Elden Ring crafting system. The bolus can be made with the following:

The Armorer’s Cookbook [6] can be found in the Siofra River underground area. Head west of the Siofra River Bank site of Grace and get on top of the cliffside. Up there are two Ancestral Spirits around a cooking pot. Defeat them and/or grab the cookbook off the corpse next to the cooking pot.

Another option to cure Scarlet Rot is using the incantation “Flame, Cleanse Me”. This faith-based spell requires 12 Faith to cast, making it accessible at a relatively low level. The incantation requires a seal and 14 Focus Points to cast and can be found on one of the corpses in the Fire Monk Camp just southwest of the Eastern Tableland site of Grace in the Liurnia of the Lakes area, north of Limgrave. 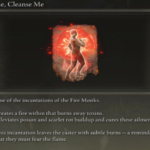 This incantation has a similar, if not the same, effect as preserving boluses. This means it can alleviate scarlet rot build-up and even cure it.

However, it does not reduce the rate of accumulation.