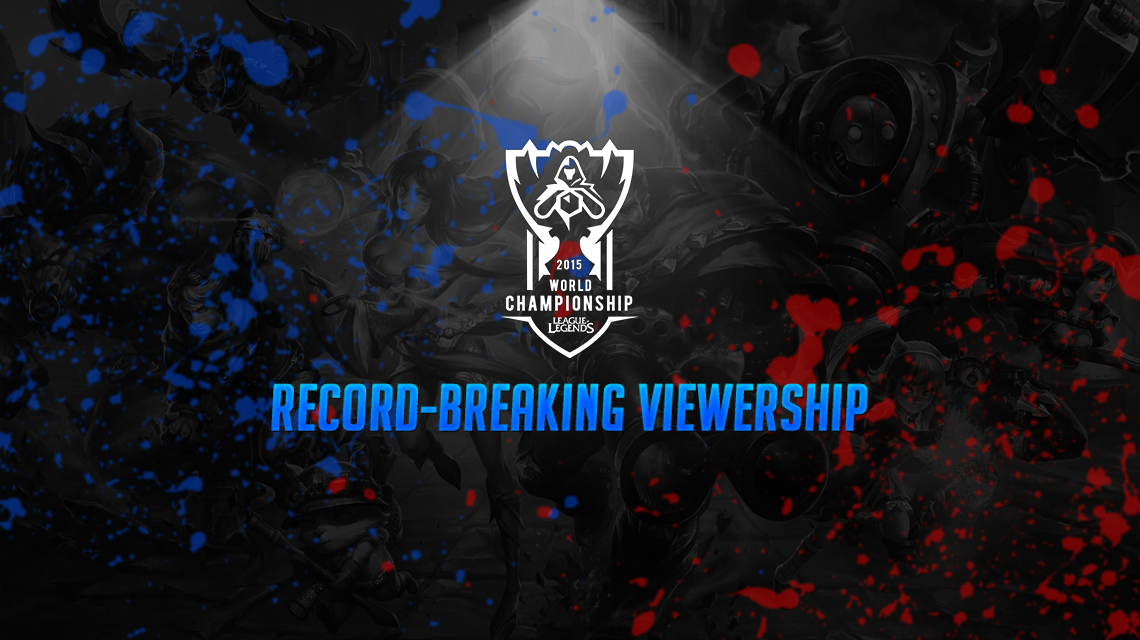 Riot Games has finally revealed its viewership for the world’s largest eSports event, the 2015 League of Legends World Championship. As expected, this year’s five-week tour broke boundaries and demolished former viewership records, continuing to prove that video games are gaining ground in the domain of televised sports and competitions.

https://twitter.com/lolesports/status/674755572449710081 The event was hosted across Western Europe – stages were held in Paris, London, Brussels, and Berlin – and captured a total of 360 million hours of live views; these numbers are almost two-times the amount of spectator hours, which was 194 million, during the 2014 World Championship. According to Riot, the World Championship proved to be Riot’s most successful event again; it “topped off an amazing year for LoL esports.” From the group stages to the finals, an average concurrent viewership of 4.2 million existed daily, with ordinary viewers watching over an hour of gameplay for every spectating period. Daily unique impressions, the total of every unique viewer per day, cumulated to approximately 334 million after 73 series, beating 2014’s 228 million. League of Legends is hands down the front-runner when it comes to spectator figures in competitive gaming, consistently outpacing its major competitor – Valve Corporation’s top-tier Dota 2 world championship, The International 2015; an event that boasts a world-leading $18.4 million prize pool. It’s worth noting that Pakistani national Syed “SumaiL” Hassan, 16, won a fifth share of the $6.6 million awarded to the North American champions, Evil Geniuses, from that Dota 2 eSports tournament. The finals that took place between former South Korean world champions and fan-favorites SK Telecom T1 and KOO Tigers at the Mercedes-Benz Arena in Berlin, peaked at a unique viewer count of 36 million all together, breaking yet another world record, with only 27 million viewing last year’s Samsung White–Royal Club grand final at Seoul’s World Cup arena, Sangam Stadium. Concurrent viewership on Twitch and YouTube Gaming’s streams also increased, capping at 14 million viewers at once compared to 11 million in 2014. Fortunately, the viewership of eSports has continued to rise tremendously, with Worlds 2015 being watched over six more times than the NFL’s Super Bowl 2014 online broadcast, which had an estimated 2.3 million online spectators across the United States, according to Fox Sports, and, as stated by the NHL, viewed more than Game Six of the Stanley Cup Finals, which peaked at 8.28 million on national television on NBC Sports. As mentioned by Riot, this news is comforting as “It’s been an extraordinary, history-making year to be an esports fan… We can’t think of a better way to head into the 2016 season and to celebrate with so many of this year’s key playmakers at the All Star Event this week. More information will be released by LoL eSports’ Twitter within the coming weeks for the 2016 World Championship along with additional venue information. What are your thoughts on the viewership from the world’s largest eSports event, the 2015 League of Legends World Championship? Let us know. Follow our Twitter – @eSportsNation for more coverage and content on competitive gaming.