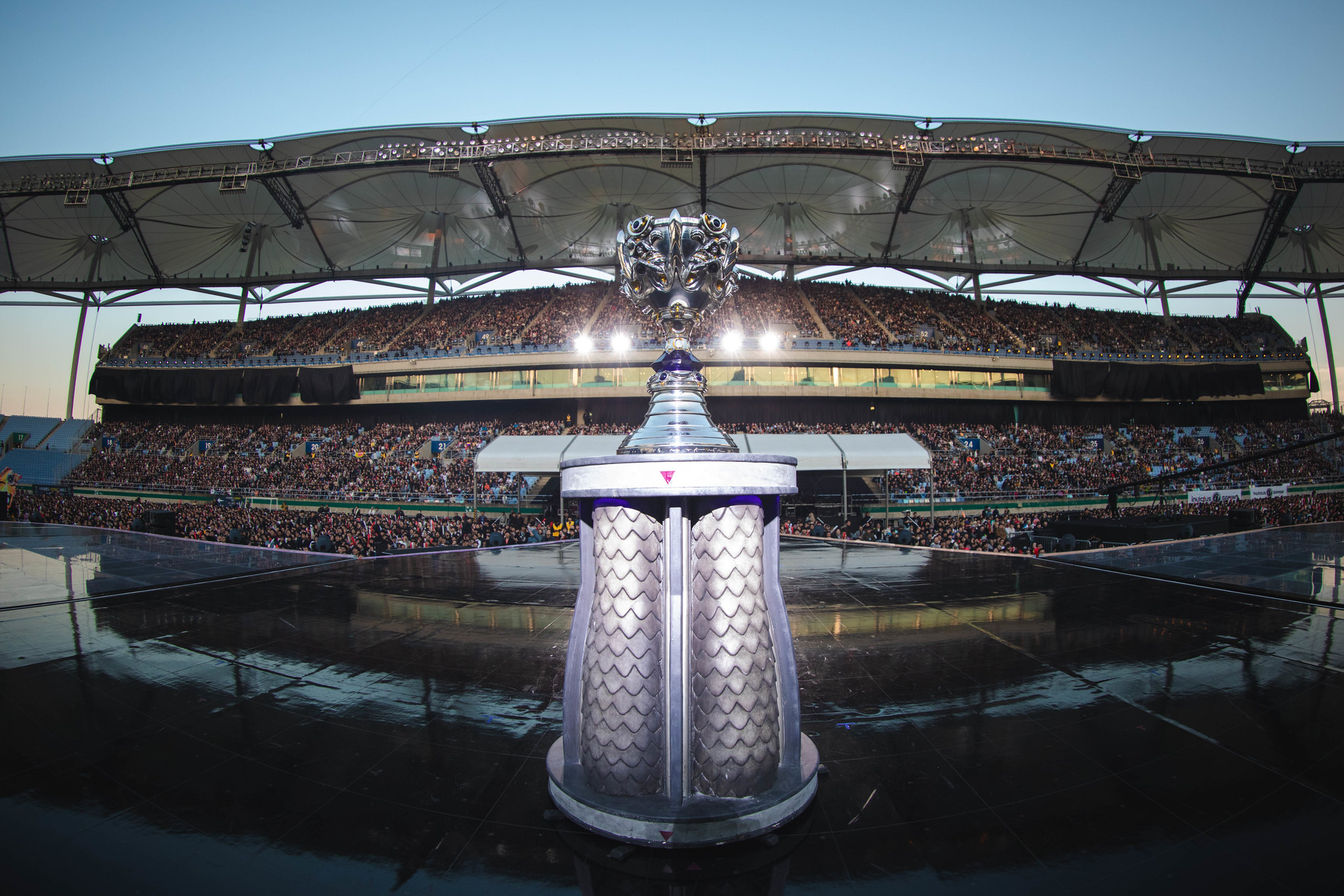 Are you, like hundreds of millions of others, experiencing the symptoms of sports withdrawal? Do you crave a David-vs-Goliath underdog story, a come-from-behind-win, or a dramatic last-second victory? Does the prospect of watching The Office for the 14th time not quite scratch your competitive itch?

We have a solution: watch esports.

Esports, as competitive video games, are fundamentally different than traditional sports. But they’re also similar where it counts to satisfy hunger for competitive action. And while live attendance for esports is suspended, the matches are still played and streamed (for free) online.

In other words, esports isn’t going anywhere during the COVID-19 pandemic.

So if you’re missing traditional sports, here’s everything you need to know to become a fan.

(And if you want to skip the broad introduction, just jump to bottom for a schedule and links to live broadcasts).

First, let’s get the differences out of the way: Esports aren’t exactly sports. They’re not on a field or a court or a course, and the players use mice and keyboards to manipulate what are essentially in-game avatars. So the action is, obviously, virtual—you won’t see bone-cracking tackles, or helmets go flying on impact, or intense stare downs, or blood or mud or grass stains.

But much of the same drama you love about sports remains in esports. There are multi-million dollar contracts and even larger prize pools. There are come-from-behind, late-game victories. There are dynasties and superstars. There’s trash talk and transfer sagas and in-team feuds.

It’s all there because, fundamentally, the similarities between esports and sports are greater than their differences.

There’s everything on the line: careers, reputation, and money—lots of it. The International for Dota 2 last year boasted a prize pool of $30 million. The prize pool for the Masters, the most prestigious tournament in global golf, was $11.5 million in 2019—yeah, that’s just a $28.5 million difference.

And think about why you love sports. They’re communal, social events. They can be vicarious—you can imagine yourself playing, imagine what you would do in the same situations. You can watch those who have refined their game to the highest levels imaginable level. And in esports, the field of play is programmed in such a way that it’s exactly level, meaning teamwork and player skill are the only attributes that decide who wins.

Here are just a few of the most dramatic moments in esports, as selected by our staff.

Brazilian underdogs Luminosity Gaming claw back from defeat with one of the most impressive plays in Counter-Strike history.

Coldzera, alone on the B bombsite, uses his sniper rifle (without its scope) to take out four members of North America’s Team Liquid. Luminosity make the comeback, winning the next five rounds, before taking the series. The team then go onto win the whole major tournament, beating Na’Vi in the grand finals.

In this clip, keep your eyes on TSM’s Doublelift—he’s able to turn around a game-changing fight with his team with incredible positioning and decision-making, all in front of a sold-out crowd at the Scotiabank Arena in Toronto, Ontario. The screams of over 19 thousand people and the play itself made it one of the most exciting moments of the year. Now, the crowd won’t be there during quarantine. But plays like this will be.

One kind of esport needs almost no explanation: fighting games. In this legendary match between Daigo Umehara and Justin Wong in Street Fighter III at EVO 2004—the biggest fighting games competition in the world—Daigo parried 15 consecutive hits from Justin Wong’s “Super Art” move.

Daigo was one hit away from losing, and even a single missed parry would have ended the match, but instead he was able to counter every kick frame perfectly and turn the tables.

Olofmeister in flames – Fnatic vs Dignitas, ESL One Cologne 2014

Olofmeister from Fnatic, one of the best CS:GO players of all time, went for the high-risk, high-reward play at the semifinals of the ESL One Cologne 2014 Major, the biggest CS:GO tournament that year. The match was tied 14-14 and olofmeister went for the five-second defuse while the ground was burning—he meticulously defused the C4 and died right after, giving the series point to Fnatic.

SK Telecom T1 were a destructive force in the League of Legends competitive scene, winning the World Championship in 2013, 2015, and 2016. And the Korean team is home to arguably the greatest League player of all time, Faker.

It was their 2017 Worlds finals loss to Samsung Galaxy that would become one of the team’s most iconic moments. After getting swept 3-0 in the series, Faker broke down crying—the greatest of all time was human, after all.

In the inaugural Overwatch League Grand Finals, London Spitfire DPS Park “Profit” Joon-yeong managed to completely turn the tide of a key match by himself.

Just as the Philadelphia Fusion were gaining traction and about to win the map, Profit zipped around the objective as Tracer. In an absolutely mind-boggling set of plays, he eliminated five Philadelphia Fusion players nearly single-handedly. He was later named the Overwatch League Grand Finals MVP, partially off of this performance.

The Play – Invictus Gaming vs Natus Vincere – The International 2, 2012

“The Play” is eight years old now. Most likely, it won’t be as mechanically impressive as highlights fans have seen in recent years. But it was the first huge play of the then-nascent Dota 2 esport, seeing Invictus Gaming’s then-undefeatable strategy turned around by Natus Vincere’s willingness to face it head on and prevail, along with an iconic storyline cast by David “LD” Gorman.

How, where, and what to watch

Esports is a big umbrella. It includes literally any video game that can be played competitively. There’s competitive Tetris and Pokémon. But the biggest esports tend to be either MOBAs (basically fast-paced, five-on-five team strategy games) and first-person shooters, though fighting games claim the longest history in esports and some of its most iconic moments.

The biggest MOBAs are League of Legends and Dota 2. The biggest first-person shooters are CS:GO, Overwatch, and Call of Duty. If you’re a fan of a more long-lasting, strategic, and cerebral game, give one of the MOBAs a try. If you’re looking for intense action right from the start, an FPS title is a good place to start.

Here’s how to watch upcoming esports games across a number of titles. For now, major competitions in League of Legends, Dota 2, CS:GO, Overwatch, and Call of Duty will continue to be played online.

You can watch all games on the LCS Twitch channel.

If you want an El Clásico-esque match, you should catch Liquid vs. Cloud9 on March 29. This could be the most exciting match of the season, if TL can get their act together in time. We’re only two weeks away from the playoffs—every game matters.

You can watch all games on the LEC Twitch channel.

Traditional LEC powerhouses include G2 Esports and Fnatic. But don’t forget Origen, currently tied for second with Fnatic and only one game back of G2. They’ll face off with the bottom two teams in the league, giving them an opportunity to sneak into the top two, or even tie for the lead.

If you like franchise sports, you will feel right at home watching the Overwatch League. The league is filled with incredible personalities and brands and in many ways emulates traditional sports production.

The league announced it will be returning this Saturday to host matches between the Seoul Dynasty and the San Francisco Shock, followed by a hometown brawl between the Los Angeles Gladiators and the Los Angeles Valiant. More matches will follow on Sunday.

The next weekend there will be 16 matches to watch, which means there is no shortage of Overwatch esports content coming our way very soon. With no March Madness to watch, it might be worth checking out.

All matches will be streamed on the league’s YouTube channel.

Next weekend, March 28 and 29, the four Chinese Overwatch League teams get to play for the first time this season.

CS:GO is one of the most iconic, unpredictable, and exciting esports around. If you are looking for an easy-to-understand, tactical esport, definitely check out Flashpoint and the ESL Pro League.

Flashpoint, which is a new CS:GO tournament series, is also broadcasting throughout this week and beyond. Flashpoint boasts some of the most famous esports commentators around and includes notable partner teams like Cloud9 and MIBR. Flashpoint is delayed, but not canceled due to COVID-19.

The more established ESL Pro League also moved online and is hosting matches throughout this week.

All games will stream on the ESL Pro League Twitch channel.

The event will continue playing through April 3. For the full schedule, click here.

If you’re free on March 24, spare some time to catch Na`Vi vs. Fnatic and Astralis vs. Vitality later. Vitality’s sniper ZywOo was the best player in the world in 2019, surpassing names like s1mple and device from Astralis. Although Vitality isn’t doing so great right now, he can single-handedly tear apart any team on his best day.

The WeSave! Charity Play is bringing together almost every top Dota 2 team to fill in the gap left by the postponed ESL One Los Angeles Major.

The tournament will have 24 teams, four from each of the six Dota regions, competing for a $120,000 prize pool that will be split into $20,000 for each region and donated to help raise awareness and fight the coronavirus. The event is being held completely online, with full broadcasts available in English here.

If you have to pick one region to tune into, choose the EU matches because you will not be disappointed watching OG and Liquid or Secret and Nigma play. Matches begin on March 20 with Geek Fam vs BOOM at 7am ET, so get ready for a long weekend of Dota 2.

The Call of Duty League (CDL) will also be returning soon, but the CDL has not announced the schedule for those matches.

We’ll update this article as soon as the schedule is released.