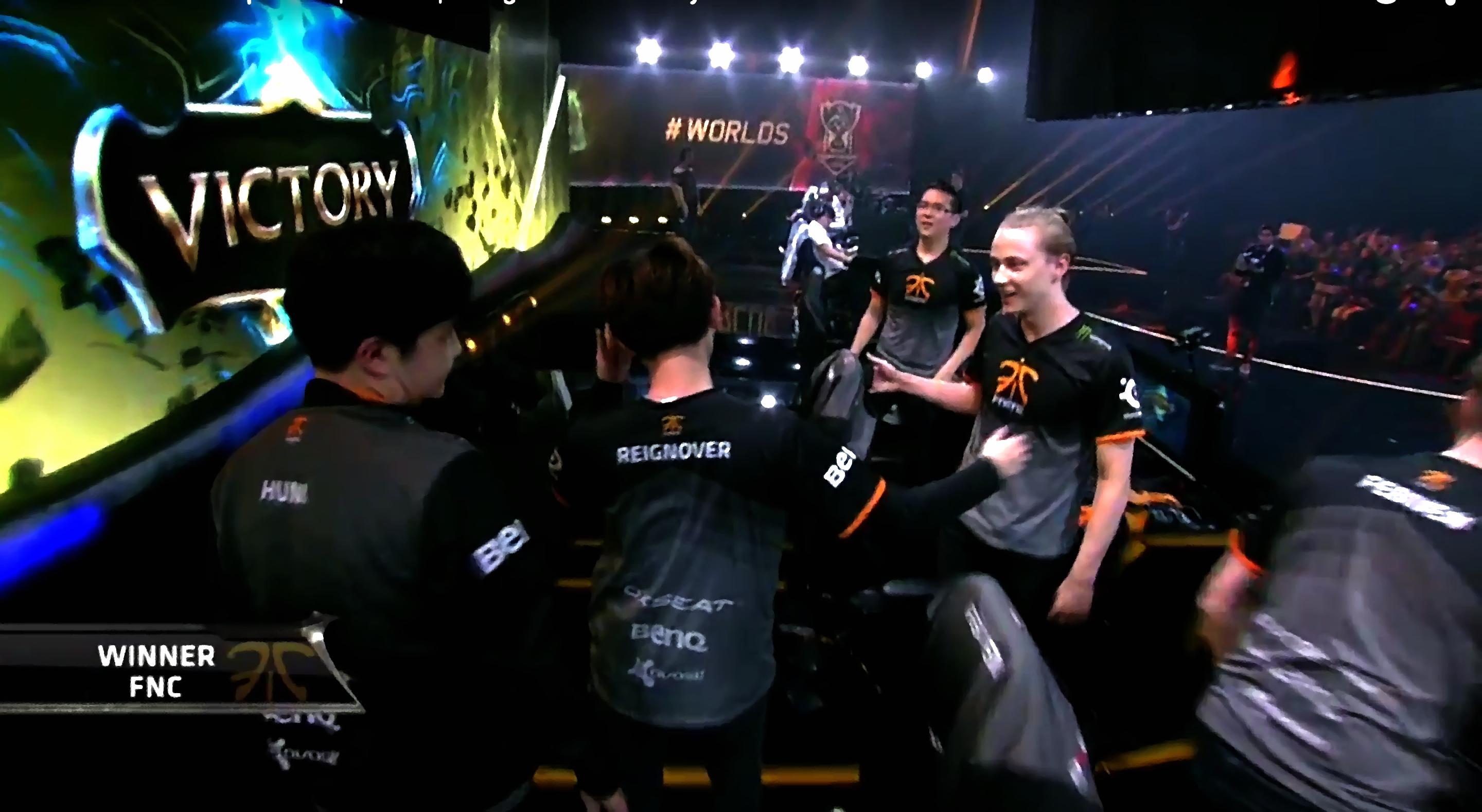 The 2015 League of Legends World Championship kicked off this morning with the West’s greatest hope challenging one of China’s top teams.

Fnatic opened the event against Invictus Gaming at the Le Dock Pullman Arena in Paris, France. It was a match heavy with importance for Western fans. Would Fnatic, the dominant team with a perfect League Championship Series (LCS) regular season in Europe, show up on the Worlds stage? Would China’s third seed, Invictus Gaming, backed by the Worlds debut of perhaps the most feared jungle and mid lane duo in Korean history, Lee “KaKAO” Byung-kwon and Song “Rookie” Eui-jin, crush Europe’s hopes?

The answer was an emphatic no.

In a statement game that showed Fnatic isn’t just a contender to win their group, but to win the entire Championship, the team absolutely smashed Invictus Gaming.

It was a one-sided stomp from the get-go, with the Europeans two steps ahead of the Chinese team in every phase of the match. Fnatic scored the first couple of Dragons. They pushed every lane but didn’t open a path for KaKAO on Skarner to pull off a gank. They secured first blood and took down all three of Invictus Gaming’s outer turrets. Then they took a Baron at the 22-minute mark. They soon pushed into the Invictus Gaming base. And then the Chinese team surrendered.

“They have a particular style where the bot lane is really passive and usually it plays around the top lane, so we tried to shut him down as much as we can,” Bora “YellOwStaR” Kim, Fnatic’s support and captain, said in his post-game interview.

The match played out just as them and their coach expected. Fnatic left Martin “Rekkles” Larsson to push against the passive Chinese bottom lane with Sivir and protected against KaKAO’s ganks with a passive game from Kim “Reignover” Yeu-jin. Top laner Heo “Huni” Seung-hoon played to “not die” against the Liu “Zzitai” Zhihao’s Riven. The game plan worked.

In the grand scheme, it’s only a single match. Fnatic now sits atop their group with a 1-0 record after a win against their biggest rival, putting in the driver’s seat to advanced to the quarterfinals. But it wouldn’t be surprising to see Invictus Gaming come back next week and trounce Fnatic in a similarly one-sided affair. Still, for Western fans, this was just what they needed to get excited about a World Championship where their favorite teams offer more hope of success than any other tournament over the past three years.

“After the regular season, we don’t want to think about perfect games,” Kim said. “We just take it one by one. We just focus on our next match. We play to our maximum and just play our game.”

If this is Fnatic’s game, we just might see the first Western champion since 2011, when Kim’s aAa team fell to Fnatic in the World Championship final. Of course, that’s getting far, far ahead of ourselves, but as Fnatic showed today, there’s hope.

Check out our coverage of the League of Legends World Championship 2015.