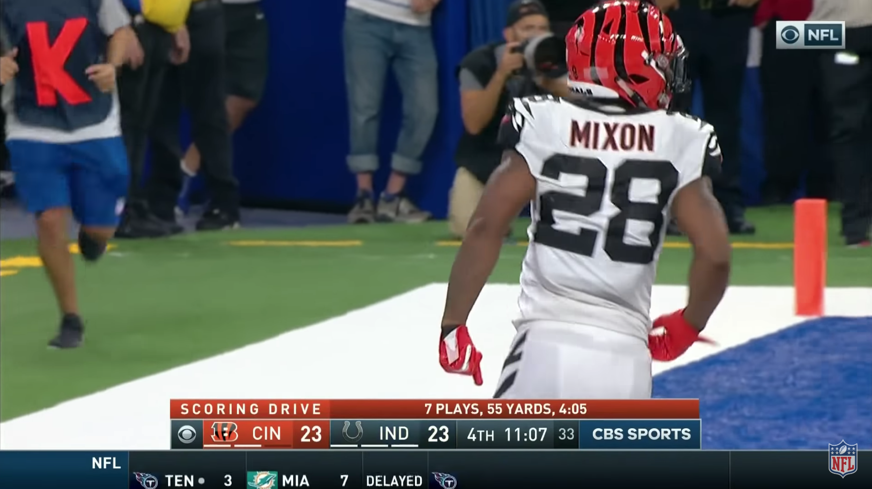 Another NFL player has celebrated a touchdown with the “Orange Justice” emote from Fortnite: Battle Royale. Today, it was Joe Mixon, a running back for the Cincinnati Bengals.

On a 2nd and 12 play, Bengals quarterback Andy Dalton was pressured in the pocket by several Miami Dolphins defenders. While being brought to the ground, Dalton managed to make an impressive 18-yard throw to Mixon, who was just outside the goal line.

Mixon simply had to turn around and waltz into the end zone—and then the Fortnite-themed dance followed.

But this 2017 second-round pick isn’t the first player to use a Fortnite emote on an NFL field. Atlanta Falcons’ wide receiver Calvin Ridley and Indianapolis Colts’ running back Nyheim Hines both brought out Orange Justice earlier this year, while Hines’ teammate Eric Ebron also had a Fortnite-themed touchdown celebration.

Fortnite celebrations have also been seen in other professional sports. French soccer star Antoine Griezmann and Boston Red Sox shortstop Xander Bogaerts, for example, have both done the “Take The L” dance. Griezmann’s Fortnite-inspired celebration came after he scored a goal in the FIFA World Cup final earlier this year.

We’ve seen a ton of Fortnite-themed touchdown celebrations so far this year, and we’re only in the fifth week of the NFL season. So it’s safe to assume that there will be plenty more as the season progresses.