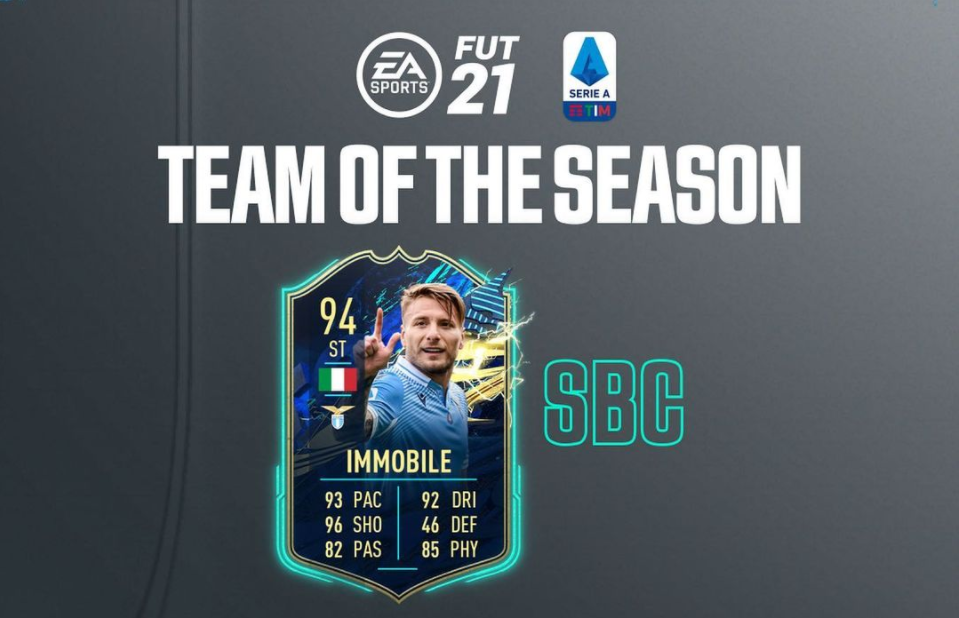 This 94-rated Italian striker has been added as a part of the Serie A TOTS promo that started on Friday, May 21. This is the third special card Immobile has received throughout the FIFA 21 Ultimate Team cycle. He also got an 88-rated UEFA Champions League (UCL) Team of the Group Stage (TOTGS) card in December 2020 and a 91-rated Team of the Year (TOTY) Honorable version in January.

EA boosted all of Immobile’s stats when you compare this TOTS card to his 91-rated TOTY Honourable version, including Passing (+6), Pace (+5), Physical (+4), Shooting (+3), and Dribbling (+3). Due to his three-star skill moves, this isn’t a card that will make you an Elite-level player in FUT Champions. But it’s good enough to have fun in the game.

You can upgrade TOTS Immobile’s stats even more with the correct chemistry style—in this case, the engine. It will give him more Pace and Dribbling skills, which will make him move faster on the virtual pitch. The SBC costs around 132,000 FUT coins on PlayStation, 149,000 on Xbox, and 137,000 on PC, which is fair value.

If you want to complete the TOTS Immobile SBC, you’ll have to turn in two different squads. The first team must be 83-rated with 75 chemistry minimum, needs to have an Italian player in it, and at least one Inform or TOTS card. The second solution requires an 84-rated squad with 70 chemistry minimum, at least one Inform or TOTS card, and a player from Serie A. The SBC will be live until next Friday, May 28 at 12pm CT, which is when the Serie A TOTS promo ends.

Here’s the cheapest solution to complete the TOTS Immobile SBC right now, according to FUTBIN, a website that specializes in FIFA content.