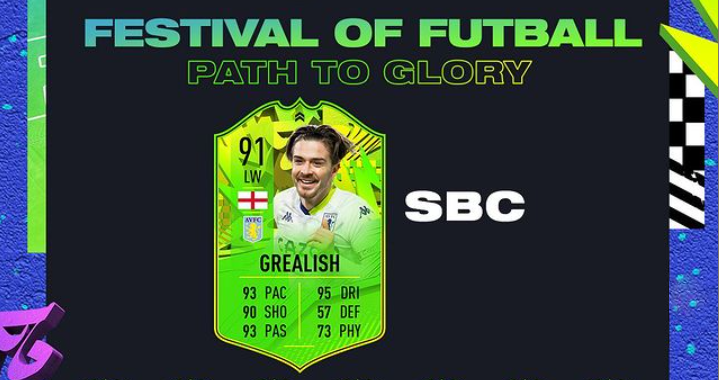 EA Sports added a 91-rated Festival of FUTball (FOF) Path to Glory version of Jack Grealish from Aston Villa to FIFA 21 today. This item is available through the squad-building challenge (SBC) menu in FIFA 21 Ultimate Team.

This is Grealish’s second special card in FIFA 21 Ultimate Team. The other one is a TOTY Honourable version. He’s one of the England players in the FOF Path to Glory promo and will receive an upgrade depending on how many wins the Italian national team gets during the Euro World Cup.

He has high stats that make him a great card despite the possible upgrade. He also has a three-star weak foot and four-star skill moves. If you apply the hawk chemistry style, you’ll increase his Physical (+5), Shooting (+5), and Pace (+5), which maximize several of his stats, such as Acceleration, Shot Power, and Long Shot.

You’ll have until June 25 to complete these squads and receive the card. Here’s the cheapest solution to complete FOF Path to Glory Jack Grealish SBC right now, according to FUTBIN, a website that specializes in FIFA content: