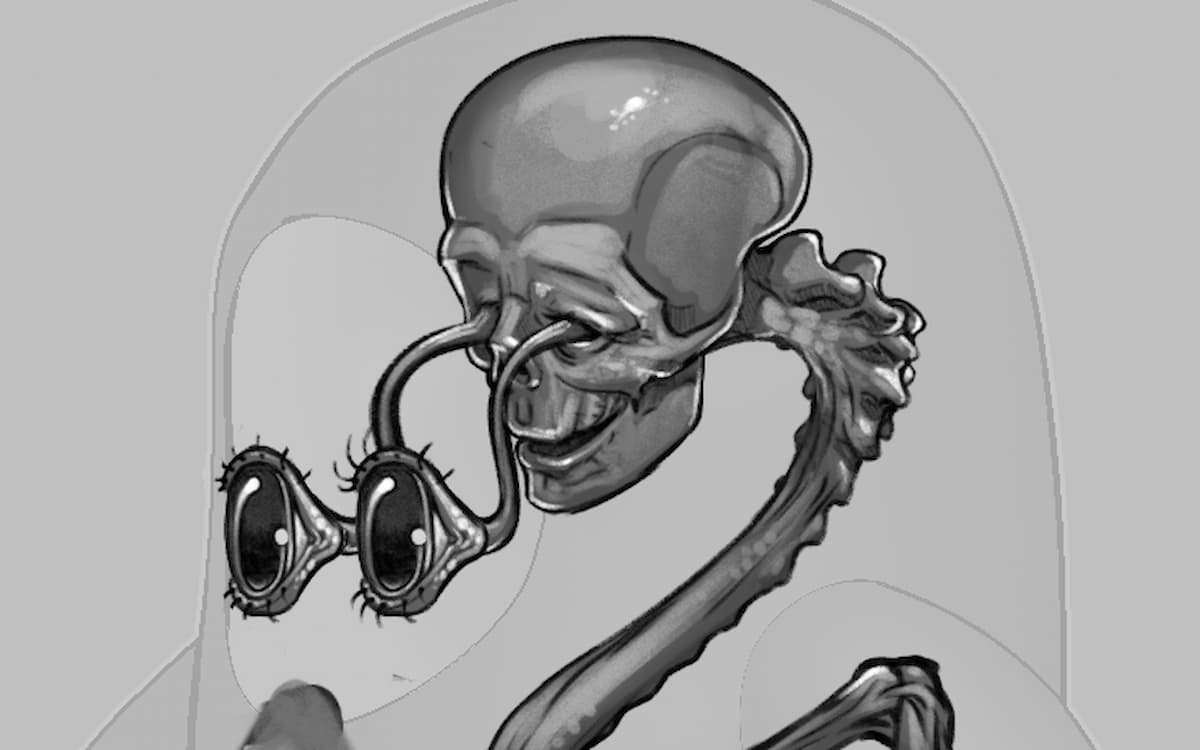 Fall Guys seems like an innocent enough game where bipedal creatures compete in showcases to win crowns. There are many traps for the Fall Guys to fall victim to in these showcases, and if they fall off a course, they disappear in a cloud of smoke.

Afterward, the Fall Guy reappears, continuing their course happily. Fall Guys seems fun and harmless at first, but as soon as you dig deeper into the lore, it ceases to be family-friendly.

The story of Fall Guys is not of friendly creatures participating in showcases with their friends and winning a big prize. In reality, it’s much more like Hunger Games without the grand prize. Over time, Mediatonic has let the Fall Guys universe slip out to the bewilderment of fans. If you imagined Fall Guys to be like the world of Candyland, you would be completely wrong. It’s closer to The Backrooms or a Creepy Pasta.

Be warned, because their anatomy is built for the world these Fall Guys reside in. These humanoid beans are much scarier than they appear, and it’s debatable if they’re really as happy as they seem.

To understand them, you should start by learning what they are.

What is a Fall Guy?

A Fall Guy is a jelly bean, but it’s not as clear as you’d think. When Mediatonic refers to the Fall Guys, they call them jelly beans. This most likely has to do with the shape, which looks a lot like a jellybean. It’s easy to assume their world revolves around candy when you look around the course. Pink slime that looks edible and that you must correctly guess sugary fruits in guessing games support this idea. However, the developer has provided evidence that this is no candy land.

The developer revealed that the Jellybeans are far too tall to be regular jellybeans. After being asked how tall the Fall Guys were, Mediatonic tweeted these jelly beans were 1.83m (6 ft) tall. So every Fall Guy is taller than 88% of humans.

Obviously, this sparked more questions. Mediatonic revealed the anatomy of a singular Fall Guy to give players a better idea of what they were controlling. They were also kind enough to provide a scale for comparing a Fall Guy to a human, revealing that a human would not win a wrestling match against a Fall Guy.

It’s okay to be scared when you look at the eyes of a Fall Guy, we were too. While it may seem horrifying at first, inspecting the image reveals that a Fall Guy could be a humanoid. We know about our relationship with other human species, like the Neanderthal, because of their skeleton. Looking at a Fall Guy, it becomes clear that there’s a deeper connection to a human than we’d want to believe. Further evidence given by Mediatonic shows that the connection is deeper than a skeleton.

The easiest way to determine that a skeleton belongs to a humanoid species is to look at its appearance, but another way is to see if it makes clothing. Fall Guys are no exception to the rule that clothing is a dead giveaway for something intelligent enough to wear layers. By the time they are old enough to participate in showcases, Fall Guys are completely naked.

In an interview with The Gamer, Lead Game Designer Joe Walsh discussed the Fall Guys universe in greater detail. According to Walsh, these jelly beans are “naked when you don’t equip a top or a bottom. Luckily they can’t feel the cold.”

As a result, these jelly beans have evolved to the point where they aren’t affected by cold but are intelligent enough to craft clothing for their alpha jelly beans. In Fall Guys, clothing is more of a status symbol than a necessity, showing how good a Fall Guy is at completing showcases.

It is assumed that early humanoids wore jewelry only for cosmetic reasons since they had no practical use. This is similar to Fall Guys, who wear clothing despite having no use for it. They wear it because it displays their excellence at what they do, which is to complete showcases.

Why do Fall Guys compete in showcases?

A Fall Guy doesn’t think about what they do with their lives, they just compete in showcases. According to Wash, “Fall Guys live to compete and do so 24/7. They’re either competing or waiting to go again.” So they live their lives in a state of constant competition. This supports the “clothing are status symbols” theory because anyone who competes normally displays their medals. These Fall Guys can be a human offshoot because they exist in a world with humans.

Fall Guys is being displayed to a live audience, at least theoretically. According to Walsh:

“I like to think that the broadcast is going out across the universe for anyone to stumble across if they manage to find the frequency. Anyone can find Fall Guys TV if they twiddle the dial enough. Dials being a thing that TVs definitely still have.”

So Fall Guys instinctively try to outdo their brethren and may think they’re being recorded. Yet, you’d be wrong if you think they get to hear any kind of encouragement because of the cheers.

“There’s no audience around,” Walsh confirmed, “so the ‘cheering’ is just pumped into the world to create more atmosphere for the viewers. Maybe different viewers hear it differently depending on where they’re tuning in from (what you’re hearing is terrifying human children, that’s for sure).”

Consequently, whatever broadcasts these TV shows are using “terrifying” children as cheerleaders for the viewer to enjoy. Walsh did not expand on why terrifying children are watching the showcase, but maybe that’s how a Fall Guy is brainwashed into loving the showcase. The point is that Fall Guys compete and think of nothing else.

How do the Fall Guys eat or speak?

The outer shell of a Fall Guy muffles its voice box, which is why you hear them trying to talk but unable to. Even more disturbing is that they absorb food from their feet. Their diet consists of “hackers,” according to Walsh. Only eating from your feet and keeping a voice box you have no use for are two very impractical features of evolution.

This was confirmed on the Discord for Fall Guys. There have been a lot of rumors about how they taste, but nothing has been verified, and we don’t believe that a Fall Guy can taste anything it’s consuming. Just because you can absorb something doesn’t mean you have the taste buds to go with that particular entrance. We imagine that Fall Guys eat similar to how suppositories work. Fall Guys‘ Twitter account also confirmed that they eat through their feet.

As stated from the account, it is “lore.” They also responded to a post claiming that jelly beans can “have a snack” when running over the pink slime.

Can a Fall Guy die?

In that previous The Gamer article, Walsh eased our fears and said that a Fall Guy doesn’t die in any showcase. When they fall or lose, they feel “a moment of displacement, serenity, zen-like detachment from all worldly and physical bonds…” which sounds a lot like death but isn’t. Just before your Fall Guy completely dies, they “pop back onto the podium to celebrate their achievements! What you’re seeing when you respawn is the same Fall Guy, so the more you play, the more you’ve been through together.”

One comment on this question leads us to believe that the process isn’t entirely painless. After describing what happens to a Fall Guy in a situation where they almost die, Walsh states that players have “put that Fall Guy through a lot, you know.” This is not a comforting statement and shows that Fall Guys definitely feel pain. In other words, when you launch your Fall Guy toward the finish line with the hammer, your jelly bean feels it.

Luckily Fall Guys live in a world built to keep them as safe as possible. That slime that seems so deadly is actually just padding, Walsh said that the Fall Guys were “falling a pretty long way so we felt like it was only fair we cushioned their fall a bit.” That is innocent enough, and it’s good to know your jelly bean survives a five-story fall in Hex-A-Gone.

How are Fall Guys born?

Finally, we have some information on what goes into a Fall Guy. When asked if Fall Guys come from eggs, which would be those golden eggs they carry around, Walsh said they do not. Walsh implied that the eggs are a Fall Guy’s natural predator. It hasn’t been put in yet, so we’ll see what comes out of an egg later.

Walsh confirmed that Fall Guys “pop into existence fully grown and ready to compete.” He even said there was no “baby” Fall Guys but made sure it wasn’t a permanent answer. He stated that he reserved the right to go back on this later, alluding to more information being worked on or not yet revealed. The game is still fairly new, and the developers may want to add to the lore over time if it becomes more popular.

Some answers may seem out of nowhere, like a Fall Guy tasting like the back of a stamp, but they have led to some believable theories. For example, Fall Guys may taste like adhesive if their outer shell is a suit pasted onto a body, which is why the voice box can’t get through and how their feet absorb food.

Still, waiting for a developer to confirm lore before you believe it is better.