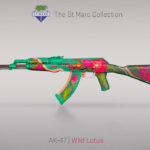 Valve released a major CS:GO update yesterday that not only brought a new operation and raised the price of the Krieg, but also added four skin collection cases.

The price of some skins is high, especially three new skins for the AWP and the two for the AK-47, two of the most popular guns in the game. The prices are high because the skins just came out, but they will likely remain expensive after some time because of their Covert grade.

So far, the most expensive skin is the AK-47 Wild Lotus, from the St. Marc collection. Only one person is selling it, and they’re asking for $1,732.50. But buyers don’t think the skin is worth that much, despite it being the only expensive AK-47 skin released. The highest bid for it is $929.32.

The AWP Gungnir from the Norse collection is just a bit cheaper, but still really expensive. A seller is asking for $1,350, but buyers are willing to pay only $822.73 for it.

The AWP Containment Breach from the Shattered Web case is being sold for $1,035. And just like in all previous cases, buyers are refusing to pay that much and are offering at most $513.28.

The last AWP skin is The Prince, from the Canals collection. Its price is hard to measure since nobody is selling a factory-new edition yet. But one player put a minimal-wear edition on sale for $670.80. The highest bid for it so far is only $341.43.

CS:GO skins are a profitable way to make money on Steam, but you must get lucky when opening a skin case or even luckier to receive it after a match. Be careful to not waste all your money on skin cases because the odds of getting these rare skins aren’t ever very high.