MIBR felps: If FURIA beat us, they are the best Brazilian team, simple

ArT and felps spoke about the possibility of FURIA surpassing MIBR on the HLTV rankings. 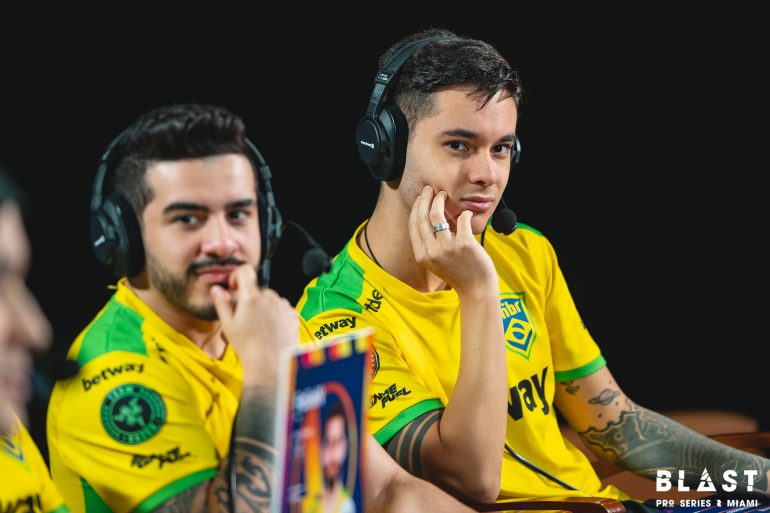 After FURIA reached the semifinals of DreamHack Masters Dallas in the last weekend, they are one step closer to entering HLTV’s ranking top 10 and also to become the best Brazilian team according to the ranking, if they perform better than MIBR at ECS season seven finals.

MIBR haven’t won any big tournament after the players transferred from SK Gaming, but their core players are back-to-back Major champions at MLG Columbus in April 2016 and ESL One Cologne in July 2016. Those are the two biggest accomplishments of the lineup out of seven other big tournaments they won in the past.

We caught up with players for both teams, Andrei “arT” Piovezan, FURIA’s captain, and João “felps” Vasconcellos, MIBR’s rifler, during ECS’ media day and asked who they think are the better team at the moment.

Despite FURIA’s recent performances and all the heaps of praise they’ve received, arT still considers them the second-best team in Brazil.

“No way [FURIA are better than MIBR], I think we have to do many things in order to consider ourselves better than MIBR,” ArT said. “I believe they are number one team of Brazil, consolidated. Even if we take their position at the HLTV ranking after ECS or other tournaments, I will not consider us better than MIBR.”

For arT, FURIA would have to win a series of tournaments to become the best Brazilian team.

“We still have a long road to go, is not as simple as take their position in some ranking, it’s more a thing that fans like to hype. I see this exactly as I see the Liquid and Astralis situation [the North-Americans have taken the number one position].”

MIBR is not playing better than 2018 yet when they were playing with two North-American players: Jake “Stewie2K” Yip and Tarik Celic. The mixed lineup didn’t win a big title, but finished second in a couple of occasions.

The duo were replaced by felps and Epitácio “TACO” de Melo in December 2018 and so farMIBR’s best result is the semifinal run at the IEM Katowice Major last February. They also fell in the semifinals at IEM Sydney on the beginning of May.

For felps, it doesn’t affect their position as the best Brazilian team. “I don’t wanna sound cocky or anything, but we still are the best team in Brazil and isn’t about the HLTV ranking,” Felps said. “For example, Liquid surpassed Astralis in the rankings, but I believe Astralis remains the best team in the world.”

He added: “We did not play at DreamHack Masters Dallas and FURIA did a great job there. The teams can say they are the best after they play against each other. If FURIA beat us, they are the better team.”

ECS season seven finals are set to start tomorrow. MIBR and FURIA can only face each other at the semifinals on June 8 or the grand final on June 9, since they are not in the same group.