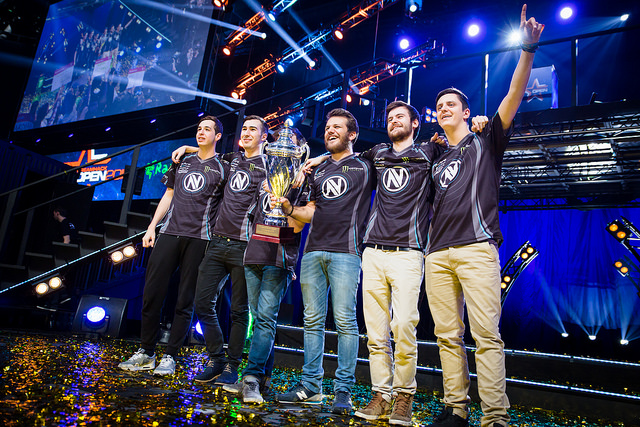 Last week at ESL One Cologne, Team EnVyUs failed to get out of their group, losing two games and finishing joint last in the tournament. This was the second Major tournament in a row at which they placed in the bottom of their group, with their showing at MLG Columbus being equally poor. In stark contrast, four players from the current lineup came in first at Dreamhack Cluj-Napoca, earning the title of best team in the world last November. I want to know what caused EnVyUs to transform from Major champions, to a team who couldn’t win a single game at two consecutive Majors.

To discover the cause of EnVyUs’ fall from grace it’s important to see what changed in the team, what differences there were between the EnVyUs who heroically won Cluj-Napoca, and the team who exited ESL One Cologne without a win to their name.

The clearest difference between the roster that became world champions in Cluj-Napoca compared to the current squad is their lineup. Although four of the players have remained the same these eight months, the fifth player differed at Cologne and Cluj-Napoca. Fabien “kioShiMa” Fiey was included in the Major-winning lineup last November, but was absent from the unsuccessful team that attended Cologne this past week. The Frenchman’s exit from the team was due to a string of lackluster individual performances in a period when EnVyUs were rather impotent in the international scene, in the early parts of 2016. The roster change did little to improve EnVyUs’ situation however, which led to the popular phrase of “Kio was the problem” being created in the community.

The man who was added to the lineup in EnVyUs’ attempt to restore their position among the world’s best was Timothée “DEVIL” Demolon. DEVIL came over from LDLC White due to his impressive performances there, but he has since struggled to replicate these on a bigger stage with a bigger team. His first offline appearance with his new team came at the Counter Pit League Season 2 Finals, where EnVyUs failed to make the playoffs following a loss to NRG eSports, causing the community to begin questioning whether his replacement of kioShiMa was for the better.

His addition came with ample time for him to assimilate himself into the current EnVyUs lineup in preparation for the next Major tournament in Columbus. DEVIL had big shoes to fill due to his teammates being the reigning world champions of Counter-Strike. Sadly, EnVyUs’ Columbus campaign drew to an abrupt halt, as the team lost games to Counter Logic Gaming and Gambit Gaming, both of which were teams the French lineup should have beaten.

The same quick end came to the team’s campaign at ESL One Cologne 2016, as another group stage exit was all the former veterans could achieve. This time, their two losses came from Team Liquid and Mousesports, both on Train. While it’s unclear if the roster change that brought in DEVIL single handedly caused the decline in EnVyUs’ form, as their results were poor before his addition, his presence in their last two Majors, but not in Cluj-Napoca, suggests he played some part in it.

What was a noticeable difference in EnVyUs at Cologne 2016 was the ineffectiveness of their force-buys. Something that made the EnVyUs of old so dangerous was that teams gained no “free rounds” against them. By this I mean that, unlike most professional teams, EnVyUs could just as easily win force-buy rounds as they could gun rounds, even becoming known for their proficiency on a shoddy buy. This allowed the team that won Dreamhack Cluj-Napoca to never give up a round and always have the potential to break the economy of their opponent.

A perfect example of their deadly skill on pistols and weak buys came in the Grand Final of Dreamhack Cluj-Napoca, where EnVyUs won the game through a buy that left Nathan “NBK” Schmitt on just a Tec-9. This wasn’t the first time EnVyUs had won a round against Na`Vi that map with a force-buy, as they won a CT round through forcing up earlier in the game. Taking into account the score ended 16-14, EnVyUs’ force-buys may have won them that map.

The team chose to force-buy twice in a row when playing against Liquid in the group stages of Cologne last week and they were unsuccessful both times. After losing the pistol round without a bomb plant, EnVyUs followed the meta for Terrorist teams and forced up, only to lose the round. Surprisingly, the Frenchmen decided to force again, which is not the norm, and were once again shut down by Liquid. There was no significant economical damage done to Liquid after the first force-buy, which left the viewers questioning why EnVyUs forced again. This failure in two force-buys in a row shows a changed EnVyUs side, who struggle with force-buys compared to their old self.

EnVyUs lacking their trademark move of being able to win force-buys is a worrying sign for the Boys in Blue, and could be a factor in why the team has been unable to surpass the group stage these last two Majors.

Strength of the competition

In the recent months it has become clear that the top teams in the professional scene have increased in number, with more and more lineups being able to challenge and beat the best teams. This is something I touched on prior to the recent ESL One Major, and explains why there are so many contenders that could have won the tournament. The Major tournaments of last year were not so saturated with talented teams, but instead had reasonably clear favourites coming into the Major.

A team that has enjoyed a peak in form recently has been Na`Vi. They were by no means the favourites approaching the Cluj-Napoca Major, despite making the finals. This is because they were still a relatively one-man army. Since then, Egor “flamie” Vasilyev and Denis “seized” Kostin have risen to be strong players and help carry Na`Vi to world dominating heights. In a preview of the Cluj-Napoca Major, Thorin labelled Na`Vi as a “dark horse” and not a favourite. Nowadays they’re known as one of the best teams in the world.

SK Gaming were not as much of a threat back when EnVyUs won the title in Cluj-Napoca as they are now. The Brazilians were put into Thorin’s “Single map upset potential” category in his Cluj-Napoca preview, and have since improved their roster and are now a constant threat to other top teams, as well as having won the two Major tournaments since EnVyUs won theirs.

It’s clear that the skill level, and number, of top teams have increased, and arguably this could have played an impact on EnVyUs’ recent failures at the Majors. Liquid certainly have improved as a unit, managing to reach the Grand Final of the recent ESL One Cologne. This is relevant to EnVyUs’ loss in the group stages as it was Liquid who sent them to the loser’s bracket.

Overall, I think EnVyUs’ decline has been a mix of these three reasons, and it’s difficult to pinpoint what has been the most detrimental. What is certain is that EnVyUs are a shadow of their former self, and we all want to see their dominance return.