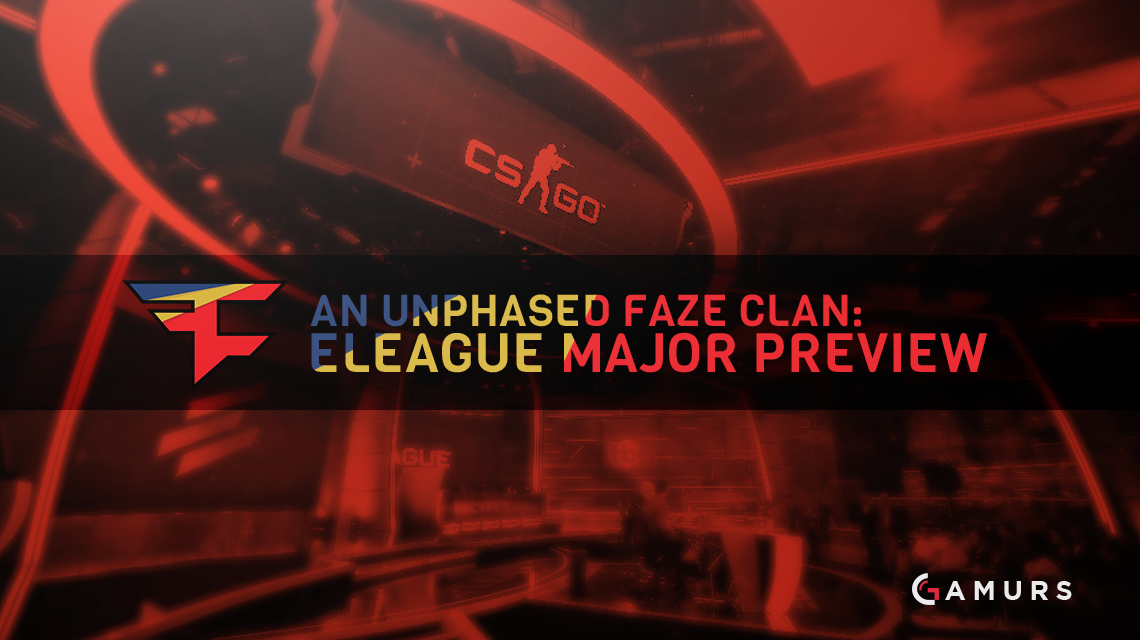 FaZe Clan’s story going into the first major of 2017 is one of progressive resilience leading up to the ELEAGUE-hosted event in Atlanta, Georgia.

At ESL One Cologne 2016 in July, they suffered a top-12 place finish as a result of their elimination during the group stage. SK Gaming gave them a 16-6 hammering on Cobblestone and they went 1-1 against a fortified FNATIC, thus eliminating them from the group with a 1-2 record on a major tilt. To have a spot in the next major, FaZe Clan would later be forced to compete in the main offline qualifier stage ELEAGUE for a chance at Challenger status.

Shortly after their unsuccessful run at the Cologne major, a hopeful FaZe began to look towards ELEAGUE Season 1 after a week’s rest from the major. Although they defeated Team Dignitas in their first match of the group, FaZe had their hearts broken by the same FNATIC squad in the last portion of Group D play (0-2 map count). Their heartbreak would repeat itself later after a crushingly close defeat against a NiKo/ChrisJ-carried mousesports in the Last Chance Qualifier for the playoffs (1-2 map count). Overall, they concluded ELEAGUE Season 1 with a top-10 finish, despite their 7-2 record, eighth place performance during the regular season.

Before their next event at DreamHack Bucharest in September, the organization decided to replace Ricardo “fox” Pacheco with Aleksi “allu” Jalli (from ENCE eSports) as the main AWPer for the Clan. Allu’s addition would land FaZe a top-six finish in Bucharest, Romania. Subsequently, their performance at the DreamHack event would spark some momentum for the squad going into Season 4 of the ESL Pro League.

In the European sector of the online league, they finished 18-8 during the regular season with significantly close wins and close losses across the board. The quartet of Håvard “rain” Nygaard, Philip “aizy” Aistrup, Fabien “kioShiMa” Fiey, and Joakim “jkaem” Myrbostad seemed to have adjusted to allu’s AWPing fairly well throughout the two months of seasonal contention. During the NA/EU-shared playoffs of the League, they fell short of reaching the championship bracket after crushing losses to Cloud9 (14-16), SK Gaming (2-16), and Ninjas in Pyjamas (7-16). Their match against NiP awarded the Swedish ninjas a spot in the bracket and a spot for FaZe on the sidelines. FaZe Clan concluded their Season in the Pro League with a top-eight finish, even though they were fourth in the regular season standings.

On Oct. 16, FaZe Clan signed former in-game leader of Astralis Finn “karrigan” Andersen, who was sitting on Astralis’ bench at the time. Karrigan would replace kioShiMa for a short period of time before kioShiMa returned to the active roster in place for Jkaem. Jkaem later decided to leave the organization after over a month of being on FaZe’s bench. Despite Jkaem’s benching, FaZe had a few North American events to look forward to with a new in-game leader.

Meanwhile in Season 2 of ELEAGUE, FaZe successfully made the playoffs after running through American powerhouses in Group A. Notably, FaZe was able to “FaZe Up” against Cloud9 and Immortals in both of their 2-1 October victories with karrigan at the helm. The diverse European powerhouse also had IEM Oakland in November following their falter in the Pro League.

FaZe performed well at the qualifier (The iBP Masters) so that they could reach the Oracle Arena in Oakland, California. In the Intel Extreme Masters event, FaZe showed dominance in the group stage against Cloud9 (19-17), Heroic (16-13), NiP (16-5), SK Gaming (16-11), and mousesports (16-7). Their throne atop Group B at 5-0 in Oakland immediately earned them a spot in the semifinals of the championship bracket, but their hot streak was short-lived after being extinguished by an even hotter NiP in a best-of-three. NiP would then go on to win IEM Oakland over SK Gaming, leaving the frenzied FaZe with a top-four placing next to Astralis.

In the ELEAGUE Season 2 playoffs less than a month later, FaZe was able to stop the Polish plow of Virtus.pro with close victories on Overpass (16-10) and Cache (16-14). Their victory over Virtus.pro led up to one of the most favored matchups in esports, OpTic Gaming vs. FaZe Clan. Thanks to the rivalry in the Call of Duty scene, the stage had been set for the rivaling organizations to compete for the first time in Counter-Strike history. Unfortunately, FaZe underperformed against the determined Green Wall, and was swept 2-0 due to losses on Train (16-3) and Overpass (16-12). FaZe’s OpTic-facilitated outro from Season 2 of the ELEAGUE playoffs (in December) left them stuck at yet another top-four finish.

OpTic CS:GO is going to a grand-final..? What a time to be alive pic.twitter.com/1jPb3W8JHU

Following their grueling loss to the Green Wall, the men of FaZe had another shot at defeating their rival in the Esports Championship Series (ECS) Season 2 Finals in Anaheim, California. FaZe Clan had claimed third place during Season 2 regular season contention of the FACEIT-hosted league, which earned them a spot in the offline finals later on. FaZe managed to defeat a shaky Cloud9, but their firepower wasn’t enough to break Astralis, the shining stars of Denmark, and OpTic Gaming, their rival hailing from North America. Instead of placing top-four in their late 2016 Counter-Strike tour of America, they had been shot down at top-six thanks to a 1-2 loss against the Green Wall.

For their last major (no pun intended) competition of the 2016 year, FaZe Clan contended in the ELEAGUE Major Offline Qualifier. Their spot in this qualifier had been solidified by their top-12 performance at the recent major. FaZe stunned Cloud9 with a 19-17 win on Mirage. Thereafter, the ambitious FaZe Clan finally attained their revenge on OpTic Gaming (after losses in the ECS and ELEAGUE season playoffs) with a 16-11 scoreline on Overpass. To top off their weekend in the qualifier, FaZe phased out Immortals on Mirage with another 16-11 scoreboard. Of the 16 teams who participated in the Major Qualifier, FaZe and GODSENT were the only teams to go undefeated in the Swiss formatted event. FaZe is one of six European teams ready to compete in the major as Challengers.

Overall, I believe FaZe is looking very strong going into the 2017 ELEAGUE Major. Of the 16 teams competing at the major, FaZe is looking like a team that could win their first major trophy for the organization. Teams with Legend status, such as SK, Virtus.pro, Na’Vi, and Astralis could be the only notable problems that the karrigan-led squad could encounter. Besides that, the only Challenger team that could give FaZe some worry would be OpTic Gaming, mainly because of their past matchups and OpTic’s recent dominance. FaZe’s roster for the major will consist of:

What do you think FaZe’s chances of winning the major are? Tell us what you think in the comments below or @GAMURScom.