Most players who start looting right after touching the ground in Call of Duty: Warzone will look for an assault rifle and possibly a sniper rifle to cover long distances. SMGs are often overlooked in most cases due to their area of effectiveness, but that may not be the case for all players.

The MP5 and MP7 are two of the most popular SMGs in Call of Duty: Warzone. Choosing one over the other may feel like the hardest task at times since they both excel in different areas. While personal preferences will also play an important role when it comes to deciding which one you should include in your loadout, taking a technical approach can help you weigh all the pros and cons.

Consider the recoil and fire rate

Depending on the type of player you are, a gun’s recoil may be a major factor in terms of your preference. If you don’t enjoy controlling recoil, you might perform better with guns that have low recoil.

The MP7 is noticeably easier to control than the MP5 despite its higher fire rate. While you won’t need to worry about your gun kicking too much with the MP7, you’ll need to try harder to stay on target. If you keep shooting while having a hard time tracking an opponent with your crosshairs, you’ll waste more bullets than you would with an MP5.

The MP5 will give you more room for error with its slower fire rate, while the MP7 will reward players with decent aim.

Take a look at the numbers

If you consider yourself a Warzone machine that operates with no feeling and only based on numbers, then looking at the time-to-kill value of both weapons can help you make up your mind.

Against unarmored enemies, the MP5 averages a time-to-kill rating of 144 milliseconds, while the MP7 takes 186 milliseconds to take down an unarmored opponent.

These values assume that you hit 100 percent of your shots while staying inside the maximum damage range, though. 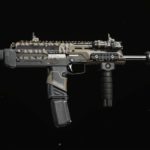 Medium-range fights may be a deal breaker

Though these two weapons are more alike than they’d like to be, you’ll start feeling the difference as your targets get further away from you.

The MP7 doesn’t offer much scalability in medium-range fights due to its incredibly short area of effectiveness. Compared to the MP7, the MP5 could feel like an assault rifle since you’ll be able to cover medium ranges with it.

Let the attachments do the talking for you

Almost all Warzone players will have their favorite set of attachments for each weapon. If the perfect attachment setup for the MP5 or the MP7 includes an attachment you just hate using and the other one doesn’t, then it may help you make your decision.

If you clearly like one of these SMGs more than the other, though, you can try to make up for any shortcomings by combining the right attachments. While the options are relatively limitless when it comes to the attachment combinations you can form in Warzone, it can also be quite confusing to decide on what may work the best on the MP5 and MP7.

All attachments serve a purpose and can shine under certain circumstances, but there are also clear trends when it comes to the attachments that professional and veteran players prefer using on the MP5 and MP7. If you’re having a hard time deciding what attachments you’d like to use your weapon, you can simply take a page out of the more experienced players’ book and let your reflexes handle the rest.

Should you choose the MP5 or MP7?

While choosing one of the two SMGs will heavily depend on personal preference, the MP5 could be considered the better all-around weapon. By picking up an MP7, you’ll practically limit yourself to short-range fights in cases where you don’t have a secondary weapon.

That doesn’t mean the MP7 is a worse weapon, however. If you’re looking to pair your assault rifle with a gun that can cover short distances, then the MP7 will work just perfectly for you. Players who find themselves rushing into close-quarters combat should benefit more from picking up an MP7.

The MP5 is going to be more versatile in the end, but you can certainly make up for the loss of versatility by pairing your MP7 with a decent assault rifle.

As a final verdict, you should pick up an MP5 if you’re looking for a more versatile and a reliable option. If you just want to focus on close-range fights, the MP7 will be your gun.

Regardless of your pick, you’ll be able to pair these weapons with secondary guns that will help you cover a variety of in-game situations. While you can easily pair your MP5 with a sniper rifle, doing the same for MP7 can leave you at a disadvantage. Most players prefer combining both of them with assault rifles, but you can try to get away with a sniper rifle next to your MP5.

When you just can’t seem to decide between the two, taking them both out for a spin can help you clear all the question marks in your head. You don’t even need to join a Warzone match since you can try out these two weapons in the multiplayer game mode if you own Modern Warfare.

Going into multiplayer will allow you to get more shooting experience with these two weapons since you’ll be constantly in the middle of action.