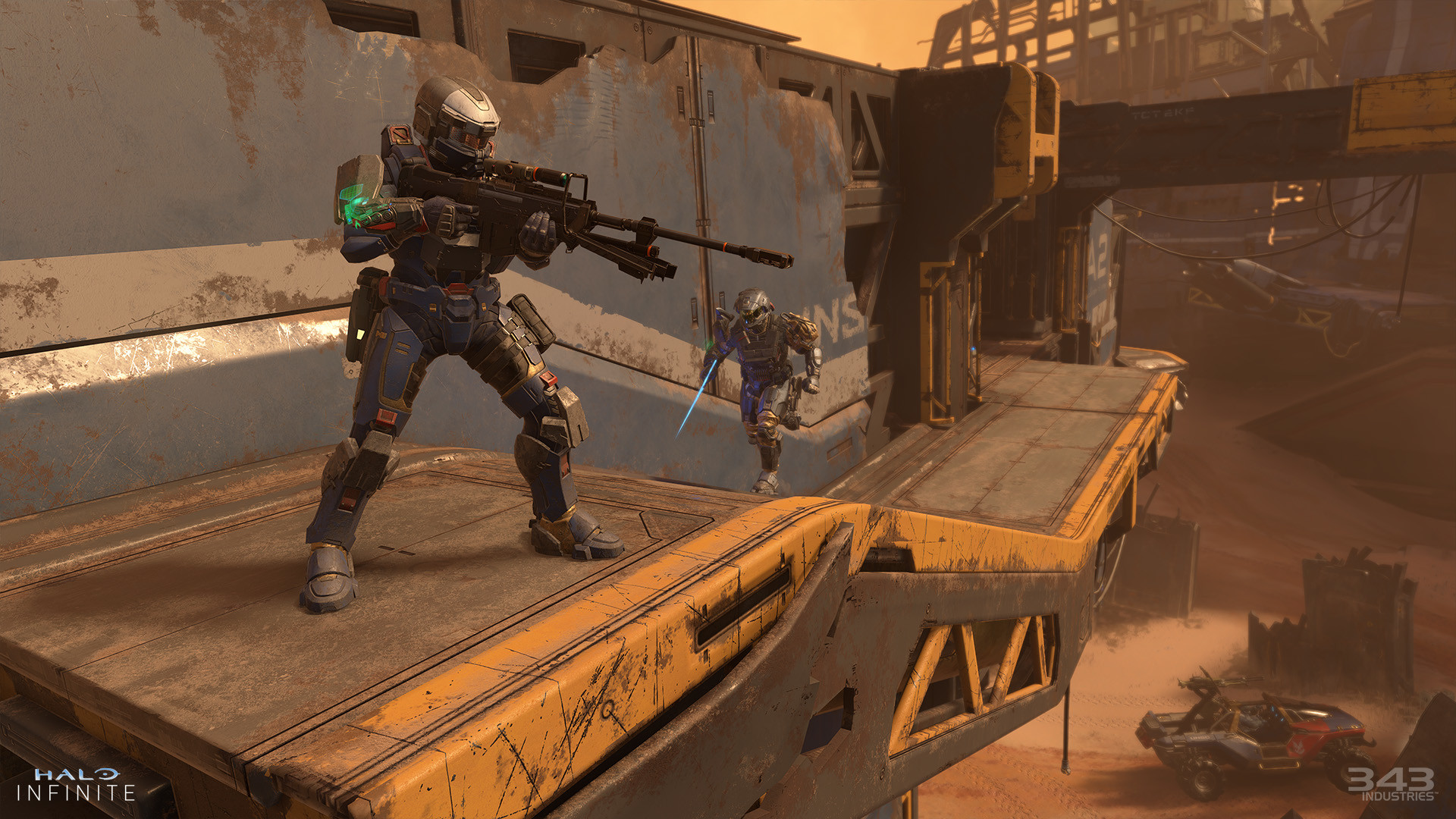 First-person shooters are consistently some of the biggest titles in the gaming industry. Each year features a slew of titles both casuals and pros gravitate toward, whether it’s parachuting into a battle royale after work, playing through an immersive campaign, competing with the best players in the world, or a little bit of each.

Some of the following FPS titles are old, others new, but each of them is distinctive in its own right. From traditional 5v5 shooters to 100-person battle royales, shooters share many forms.

No matter the genre you gravitate toward, the following list shares a number of key “best-of” considerations: re-playability, a pleasing multiplayer experience, a solid competitive scene, and countless hours of enjoyment.

Despite a shaky multiplayer release back in Nov. 2021, Halo Infinite has improved little by little as 2022 rolls along. Developed by 343 Studios, long gone are the days of Bungie steering the Halo ship. No stranger to the shooter genre, Halo Infinite breathes new life into the series.

The Halo Infinite roadmap released at the beginning of 2022 outlined a array of improvements, updates, and new content in the works. The most recent update to the game, Season 2: Lone Wolves, introduced two new maps: Breaker, a Big Team Battle map, and Catalyst, a much smaller arena-like map that mirrors similarities to Halo 3’s Epitaph. Another significant update included a never-before-seen game mode in Last Spartan Standing, 343’s take on the battle royale genre.

It’s no secret there’s been issues and bugs that have popped up throughout Halo Infinite’s lifespan so far. However, the developers have constantly addressed them, all the while maintaining an open dialogue with the Halo community, and taking player base feedback seriously. Halo Infinite is nowhere near a polished title, but each day it inches closer and closer in that direction.

Developed by Blizzard and released in 2016, Overwatch is a vibrant hero-bashed shooter set in the future. Matches offer an intense and addictive six-vs-six battle amongst a vast cast of playable heroes (32 to be exact), each with their own unique abilities. That amount of choice leads to endless combinations of team strategies, promoting gameplay that constantly feels different from match to match.

With the long-awaited second installment on the horizon, it’s important to remember where everything started with the original Overwatch. At its core, Overwatch infuses superhero-esque features into its identity, on top of reinventing itself in its own way. Among the 32 playable heroes, each is capable of impressing, encouraging players to try every one of them.

Overwatch strikes a fine balance between adrenaline-fueled combat and a highly strategic multiplayer experience, making for a strong contender for anyone seeking competitiveness and originality in an FPS.

The visuals, soundtrack, and sound effects are particularly impressive. The new Xen levels reflect the same theme and structure as the original, while also building on the winning Half-Life recipe. There’s a lot more to discover in terms of storytelling and exploration in Black Mesa. For those seeking a trip down memory lane while also welcoming new content, this refresh delivers, echoing the highs and lows of the original game without copying it entirely.

Each of the game’s characters, called “operators,” have their own unique gadgets, stats, and loadouts. Operators are broken up into two categories: attackers and defenders, and the different types of ultility available to each category can completely change how a player approaches the game.

Rainbow Six Siege is a highly strategic shooter. The vast selection of operators has shaped the game into what it is today, making every match feel and play out differently. Minor in-game decisions lead to big outcomes in Siege, with each round offering a new lesson on plays that can be executed better. Siege rewards patience, persistence, and quality teamwork. Over its now seven-year lifespan, the game has become Ubisoft’s poster-boy multiplayer shooter, resonating deeply with many first-person-shooter gamers.

Embark in an epic single-player journey, full of countless demons to slay across hellish dimensions, all in an effort to prevent the final destruction of humanity. Doom Eternal is a fast-paced, adrenaline-fueled, and often unforgiving experience that leaves players breathless during countless moments of gameplay, doing an excellent job of hooking players right from the start.

Shoot, slash, and blow up demons in whatever way you see fit throughout a top-notch campaign. Doom Eternal refines an already outstanding 2016 Doom iteration, constantly teaching players how to play faster, smarter, and more efficiently.

Despite the old-school, straight forward nature of its campaign, there’s plenty of room for creativity as players choose how to engage fights in Doom Eternal, right down to preferred slaying stye and weapon choice.

Riot’s remix of the competitive shooter formula will have fans of CS:GO feeling right at home. Just like Counter-Strike, VALORANT is geared towards esports, so if you’re keen on embracing the world of competitive shooters, this sci-fi title is a strong candidate.

The big difference between VALORANT and traditional Counter-Strike is that VALORANT features a cast of heroes, known as agents, to choose from. Each agent possesses its own unique abilities, ranging from healing allies to making walls appear out of the ground, a far cry from the terrorists and counter-terrorists in CS. On the other hand, VALORANT‘s weapons, economy, and main game mode, Search and Destroy, all come straight out of Counter-Strike‘s playbook.

Choose Jett, an agent possessing movement abilities that make the duelist difficult to deal with. Or, go with Sova, a versatile agent who can reveal enemy positions to his team. Every agent requires a different playstyle, which makes trying all of the game’s agents an exciting venture.

There’s no shortage of big names who’ve made the switch over to competitive VALORANT, which speaks volumes of the game’s popularity and extensive esports scene.

Escape From Tarkov puts a new meaning on the term realism, showcasing an impressive amount of attention to detail infused into the shooter. The gameplay features raids that are played out on large maps, with players spawning around the edges. The aim is to make it to one of the designated extraction points at any cost. Killing and looting along the way is unavoidable.

When it comes to weapons, attachments, and physics, Escape From Tarkov doesn’t hold anything back. Aside from the dozens of guns to choose from in the first place, each weapon can be modified, right down to the point where they’re unrecognizable from the stock version. Players can swap scopes, barrels, mounts, foregrips, magazines, gas blocks—the list goes on. With that, it’s unlikely any two weapons are identical, making for a truly unique weapon system.

Escape From Tarkov is also unique in how punishing it can be to play. If you die in a raid and an enemy loots your body, you’ll lose everything you brought into the raid, even your treasured custom build. However, that means you can turn the tables on your opponents and loot their favorite weapons off of their lifeless bodies if you win a fight.

Since its 2019 release, Apex Legends has evolved considerably, cementing itself as a fast-paced, character-driven alternative to the standard battle royale formula.

Unmatched mobility, versatility, and teamwork set Apex apart from countless other shooters. Engaging opponents in firefights often provides an incredibly tense experience. The game encourages players to jump, slide, and dodge bullets while firing in the opposing enemies’ direction, all while trying to avoid dreaded third-party teams looking to swoop in.

Each of the game’s playable characters, called “legends,” offer something distinct. Figuring out which legend is more your style, or pairs better with fellow teammates makes for a rewarding venture.

Combining the character-driven approach of other titles with the endless variables that battle royales offer, Apex is a great game for players to jump into over and over again.