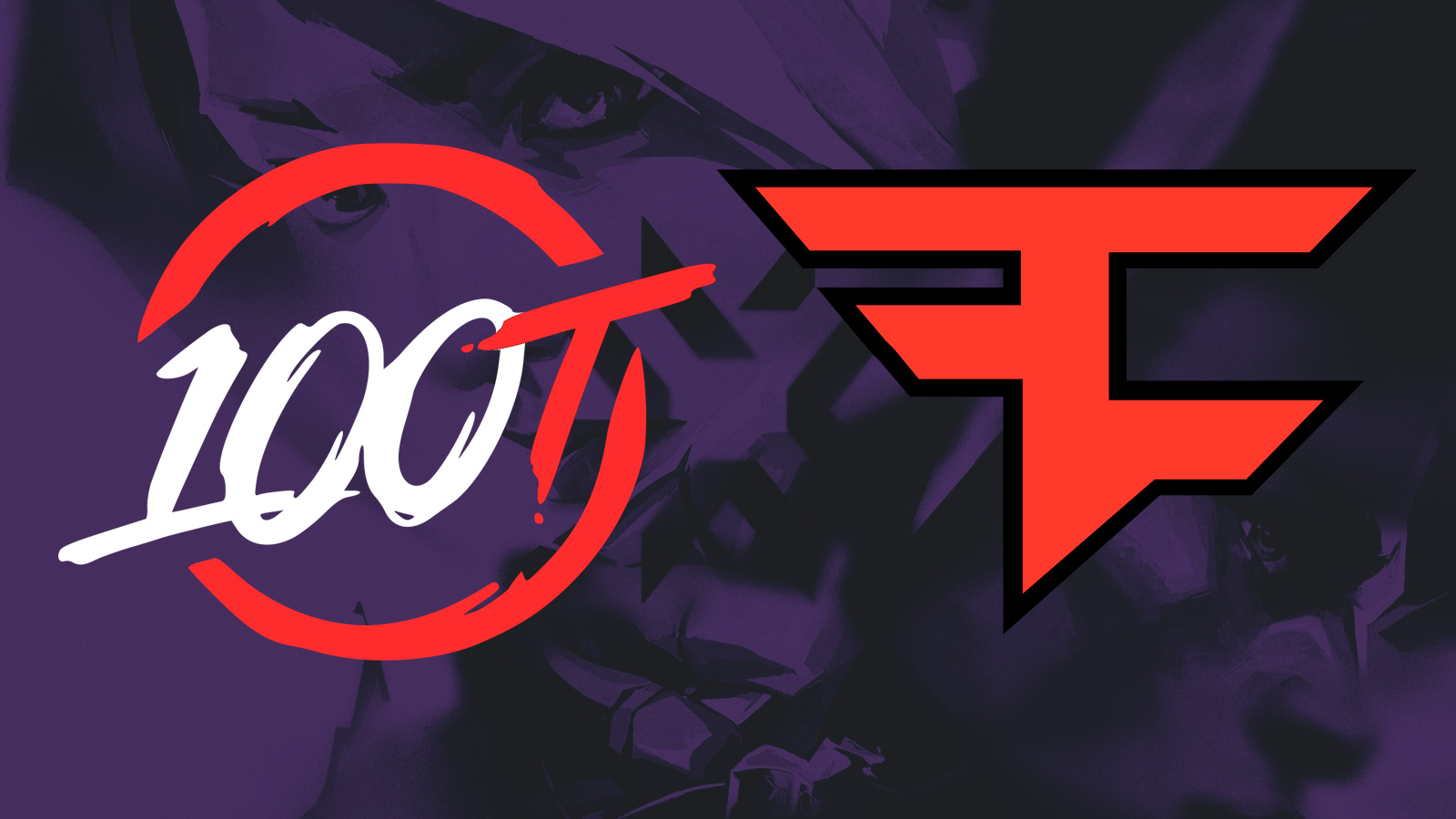 All of the first-round matchups set for the NA VCT Stage Three: Challengers Playoffs are going to be must-watch series of VALORANT: Sentinels vs. Rise, TSM vs. Team Envy, Luminosity vs. XSET, and—of course—FaZe Clan vs. 100 Thieves.

The meeting between FaZe and 100T is a meeting of teams in similar positions in regards to their current VCT standings. FaZe and 100T are fourth and fifth on the North American standings and will both, at minimum, qualify for the Last Chance Qualifier. But how the two teams reached their spots is actually quite different, with 100T playing consistently, while FaZe have bounced between looking dominant and defeated.

On top of that, the meeting between 100T and FaZe features two teams with drastically different backgrounds. The 100T roster is a collection of former NA CS:GO pros that were present during all of the various eras of the scene’s decade of history. FaZe, on the other hand, is a rare collection of nearly all former Overwatch pro players who’ve surpassed the lower expectations set for players with that background by the early VALORANT community. Both are playing for organizations with their founders’ roots deeply embedded in Call of Duty.

Before the two teams log into the server, let’s look at each team’s VCT performance, their previous meeting, and what to expect from their opening round Challengers Playoffs series.

100 Thieves have been a consistent fixture near the top of the NA VCT standings but have still been just a slight tick below the high expectations set for them after their First Strike victory at the end of last year. At the first Challengers event of the Tour, they didn’t make it out of the open qualifier, but that that can be attributed to missing nitr0, who was away from the team to see the birth of his child.

To 100T’s credit, they’ve advanced through every open qualifier since and even added Ethan to the roster ahead of Stage One: Challengers Three and still succeeded. They may not have gotten as far as they’d hoped they would at Masters One and the Stage Two: Challengers Finals, but they’ve done consistently well enough to at least secure a Last Chance Qualifier spot.

While 100T have been consistent during their VCT run, FaZe’s run has been a story of exceptional highs and disappointing lows. In Stage One, they missed out on Challengers One and finished last in Challengers Two. But it was at Challengers Three where they put the rest of NA on notice, going on a spectacular run through the main event and Masters One, knocking off everyone that wasn’t Sentinels and securing a hefty load of 70 VCT points.

But that success didn’t carry over into Stage Two, where back-to-back open qualifier losses meant they would spend most of the stage on the sidelines. It’s not so bad considering they lost to Version1 at the beginning of their run to Reykjavík, as well as to an underrated T1 team. Coming away with no points after such an impressive run to end Stage One put a lot of pressure on their Stage Three performance, however.

Outside of a best-of-one group stage match at the JBL Quantum Cup back in December, 100T and FaZe have met only once during VCT in the Stage One: Challengers Three grand finals. FaZe Clan took that series 3-0 after starting with a one map advantage. You could make the case that this match doesn’t have much to go off since both teams had already qualified for Masters, but they were both still fighting for seeding and prize money.

As was the case for many FaZe matches during this period, the series against 100T was a Jett showcase for babybay. On Icebox, a not-often picked but still strong map choice for FaZe, he had all kinds of space to dash into, and his aggressiveness on the defense side prevented 100T from getting any serious momentum going. On Bind, 100T put up more of a fight with a solid defensive side but struggled on attack again. FaZe would play up on defensive site angles, with babybay either pushed up with them to get early picks, or anchoring the back of sites with an Op or Marshall—or he’d just drop them all with the Jett knives.

What to expect from the FaZe vs. 100T first-round series

Five months after their last meeting, FaZe and 100T face each other again, with a lot more on the line this time. With three teams advancing out of the double-elimination bracket to Berlin, getting on the fast track in the upper bracket is a huge advantage. If it were top four, a team would just have to win two series before losing twice, regardless of if they started off with a loss or not. But because it’s top three, if you lose your opening series, you then have to win three straight games in the lower bracket to nab the third and final qualifying spot.

The list of personnel is only slightly different, with Marved having moved on to Envy and BabyJ having stepped up in his spot. BabyJ spends most of his time with Killjoy, who’s overwhelming presence when it comes to info-gathering and post-plant is something FaZe needed to take another step up. Depending on the map selection, he can also be called on to play both Cypher and Breach.

On the other side of the server, we have the same 100T roster that FaZe faced five months ago. They’ve kept the same composition since: Hiko on Sova; Asuna on duelists; nitr0 on controllers; steel on Killjoy/Cypher; and Ethan on the flex filling whatever need they have for that map in Omen, Skye, or Sage. Similarly to how babybay operates on FaZe, 100T typically win on the back of production from Asuna—but also like FaZe they don’t need him to go off to win games.

A babybay-vs-Asuna duel would be a fun start to the Challengers Playoffs bracket. Hopefully for fans, this series between 100T and FaZe Clan will be far closer than the last.