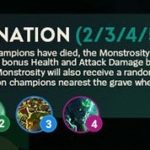 Scheduled to release on the PBE servers on April 14, Set Five in TFT will have a good-vs-evil theme. Black Mist has seeped into the auto battler through a mysterious portal, according to Riot, creating chaos where there was once order. Set Five Reckoning contains a total of 27 traits and 60 champions, along with new Little Legends and boards.

From Origins like the Forgotten and Redeemed to Skirmisher and Legionnaire classes, here’s every trait in TFT Set Five Reckoning.

There are a total of 13 Origins in Reckoning, of which five contain three or fewer champions. The God champions of Set Five, Darius and Garen, are found within the traits Dawnbringer and Nightbringer.

Abomination awakens a Monstrosity from the grave when three allied champions have been eliminated. The Monstrosity gets bonus health and attack damage based on allied Abomination units’ star levels, according to the TFT cheat sheet.

The Monstrosity will also receive a random copy of an item from each of the three Abomination champions nearest the grave when combat starts. It also stops charging after slamming into two targets. The Monstrosity removes attack speed slows and attack damage reduction effects when he casts his spell.  It’s Armor/magic resist is 40/65/75. Attack damage is 100/140/180 and AD damage per star level is 10/14/18.

The Hellion trait provides champions with attack speed. Whenever a Hellion dies, according to the Set Five cheat sheet, a Doppelhellion of the same type will leap from the Hellion portal. Doppelhellions will have one less star than the champion that perished and no items.

Champions who have the Hellion trait are Ziggs (one cost), Kled (one cost), Poppy (one cost), Kennen (two cost), Lulu (three cost), and Teemo (five cost). Trait synergies are activated at 3/5/7.

The Dawnbringer trait is all about healing, with champions rapidly healing a percent of their maximum health the first time they drop below 50 percent. When this heal occurs, according to the Set Five TFT cheat sheet, all allied Dawnbringers gain 12 percent bonus damage.

Nightbringer champions gain a decaying shield equal to a percentage of their maximum health the first time they drop below 50 percent, according to the cheat sheet. When this shield is applied, that Nightbringer gains bonus damage.

Redeemed champions gain increased armor, magic resist, and ability power at a synergy of 3/6/9. When they perish, according to the TFT cheat sheet, they split this bonus among living Redeemed champions.

Dragonslayer champions gain ability power at two and four synergies. After the first allied Dragonslayer scores a takedown on an enemy with at least 1,400 maximum health each combat, according to the Set Five cheat sheet, all allies gain additional ability power for the remainder of combat.

Revenant champions revive after their first death each combat, according to the Reckoning cheat sheet. Once revived, they take and deal 30 percent increased damage.

Champions that start combat adjacent to at least one Verdant champion are immune to crowd control for the first three seconds of combat, according to the cheat sheet. Trait synergies occur with two Verdant champions.

Only Kindred has the Eternal trait. Kindred deploys Lamb and Wolf separately, according to the cheat sheet, each with their own abilities and effects based off Kindred’s items.

Set Five Reckoning contains a total of 14 classes, of which all but three contain four or more champions.

Similar to Fates, Brawler champions gain additional maximum health at a synergy of two and four.

All allies block a flat amount of damage from all sources when the Knight trait is synergized at 2/4/6.

Legionnaire champions gain attack speed, and their first attack after casting a spell heals them for 50 percent of the damage dealt.

Cavalier champions quickly charge their targets whenever they move. Cavaliers also take reduced damage. At the start of combat and after charging, this effect is doubled for four seconds.

At two and four Renewer champions, Renewers heal for a percent of the maximum health each second. If their health is full, they restore mana instead.

Spellweaver champions have increased ability power at two and four synergies. They also get bonus ability power any time a champion uses an ability, stacking up to 10 times.

Heimerdinger is the only Reckoning Caretaker champion. Caretakers deploy with a baby dragon that can be placed anywhere on the battlefield, according to the TFT cheat sheet. Baby dragons gain 100 percent of their handler’s attack speed and restore 80 mana to their Caretaker upon perishing.

Teemo is the Set Five champion with the Cruel trait. Cruel champions are purchased with health instead of gold.

All Set Five Reckoning traits from the PBE cheat sheet are subject to change prior to the official release on April 28. This article will be updated with each PBE patch leading up to the TFT Set Five launch. The PBE update may take place a day early on April 13, according to Riot.

Update June 24 1pm CT: This article was updated to reflect all changes from TFT Patch 11.13.