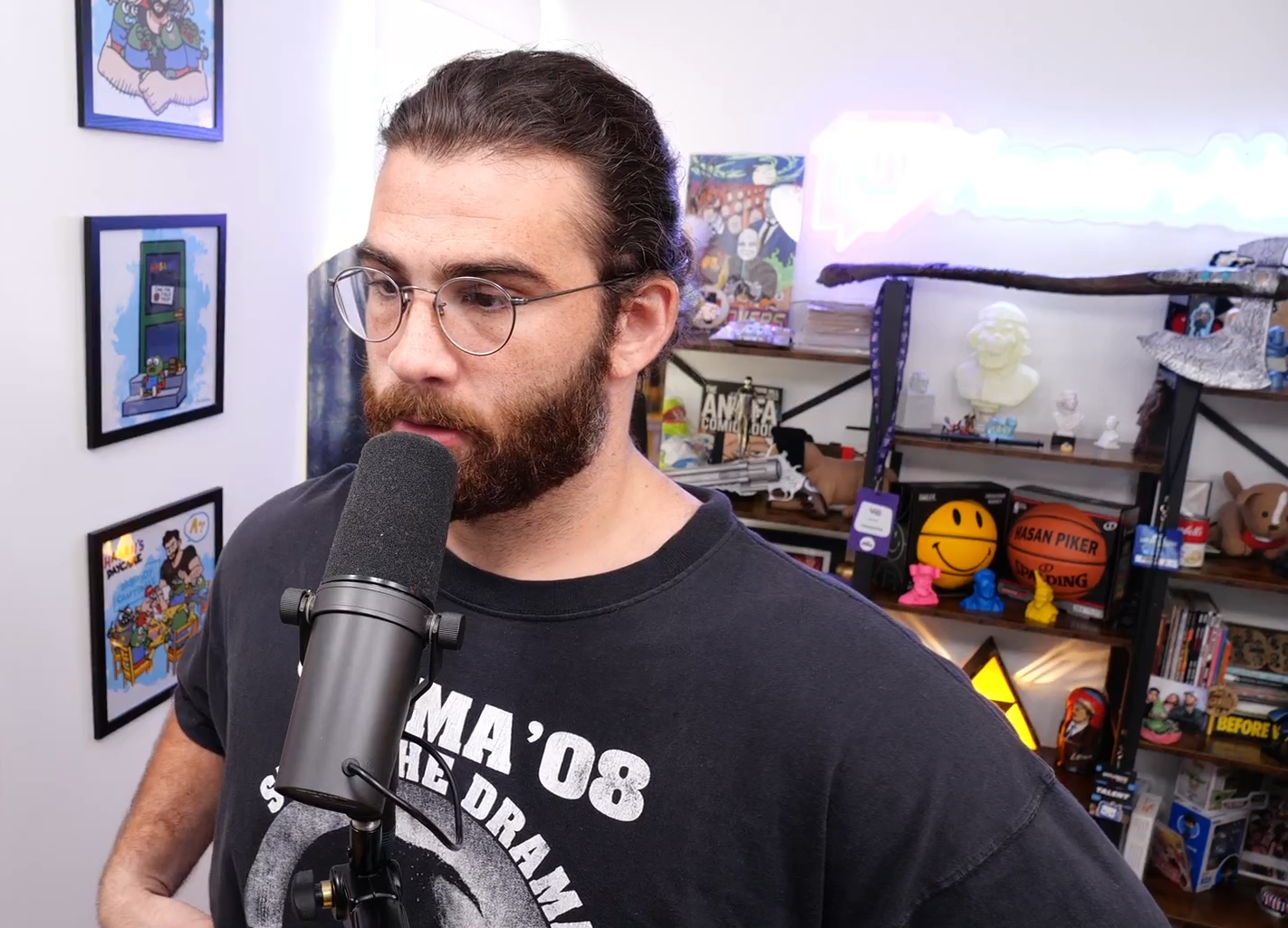 Turkish-American political commentator and variety Twitch streamer Hasan Piker is one of the most prominent and recognizable content creators on the platform.

During his senior year of college in 2013, Hasan interned for The Young Turks, a progressive news show co-founded by uncle Cenk Uygur. After graduating, Hasan was hired by the network’s advertisement and business department, occasionally filling in as a host when needed. The rising political commentator eventually became a mainstay on the program, becoming a host and producer, creaint his own segment titled The Breakdown.

Hasan began to gain greater notoriety during the 2016 election, whenever he presented political analysis targeted toward Bernie Sanders millennial supporters. Hasan later created another show for TYT in 2019, dubbed Agitprop, however soon after departed from TYT to further pursue streaming.

Hasan began streaming in Mar. 28, 2018, quickly amassing an audience in large thanks to his politically focused content and collaboration with fellow streamers.

Through 2019, Hasan experienced immense growth and was also embroiled in multiple controversies. Hasan’s divisive content—particularly several controversial statements surrounding U.S. representative Dan Crenshaw and the September 11 attacks—was covered by national media and the streamer was pushed to apologize after a week-long ban from Twitch.

The 30-year-old streamer’s channel spiked in views during the 2020 United States election. Playing Among Us with U.S. representatives Alexandria Ocasio-Cortez, Ilhan Omar, and streamers like Pokimane, Hasan spearheaded some of the most unconventional and successful crossover streams in Twitch history.

Hasan Piker, at a glance

How much does Hasan Piker make on Twitch?

Hasan Piker is one of the highest earners on Twitch. The Twitch payout leak, which showed how much streamers had made between Aug. 2019 and Oct. 2021 from subscriptions and donations, Hasan allegedly earned $2.8 million. In the past, the streamer has publicly displayed the number of subscribers to the channel, typically in the 50,000 range.

This amount does not include earnings from advertisers, YouTube content, sponsorships, merchandise, or any other revenue streams.

What games does Hasan Piker play?

Infamously, Hasan plays very few games in comparison to his Just Chatting and reaction content. The political streamer was heavily involved in the NoPixel Grand Theft Auto V Role Play server during its prominence, though has been notably absent from the scene recently. Aside from this, Hasan will typically play trending games such as Fortnite, Rust, Among Us, Elden Ring, and other currently popular titles.

Where is Hasan Piker from?

Hasan Piker is originally from New Brunswick, New Jersey. The streamer was raised in Istanbul, Turkey, though returned to the United States to attend university. Currently, Hasan Piker resides in Los Angeles, California, where he regularly collaborates with other streamers, YouTubers, and other content creators living in the area.

Why is Hasan Piker so popular on Twitch?

Hasan Piker saw near exponential growth on Twitch for a wide variety of reasons. Firstly, the streamer had a pre-existing audience from his solo shows on The Young Turks, Agitprop and The Breakdown. Secondly, Hasan collaborated with many of the platform’s premier content creators almost since the start of his channel. Finally, his politically driven content brought a wide array of viewers, either agreeing with the streamer or debating him in chat.

Controversies and his timely coverage of major world events undoubtedly helped the channel grow as well, bringing massive viewership spikes. Hasan Piker has also headed some of the most unique crossovers on Twitch, bringing political figures such as Alexandria Ocasio-Cortez and Ilhan Omar on the platform.

Hasan Piker’s most popular clip came from his Among Us stream with U.S. Representatives Alexandria Ocasio-Cortez and Ilhan Omar. In the context of the clip, Hasan was forced to select between the two representatives to attempt to find who the imposter was. This stream was one of Hasan’s most successful individual streams ever, amassing over 700,000 viewers with the clip alone reaching over 637,000 views.

What is next for Hasan Piker?

Fans can expect Hasan Piker to continue his coverage of United States politics and world news. Hasan Piker has recently ramped up his philanthropic ventures, donating massive amounts to charities supporting issues such as Ukrainian relief funds and unionizing efforts.

With further political campaigns undoubtedly on the horizon, fans can expect Hasan Piker’s Twitch channel to keep being a source of news and debate.