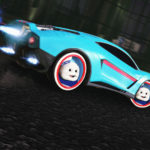 Rocket League is one of the most fun multiplayer competitive games out there. Competitive players strive to prove themselves against the rest of the playerbase, while casual players enjoy the company of their friends.

There’s one aspect that bring both parties together, however, and that’s their love for cosmetics. There are countless different vehicle types, skins, and other cosmetic items that allow players to decorate their cars to reflect their sense of fashion. Alongside showcasing your style, they are also an excellent way to show off how long you’ve been playing Rocket League.

If you don’t count your car’s main frame, wheels will draw the most amount of attention. Choosing the perfect one to compliment your setup will make the difference between looking like a veteran or someone who just randomly equipped all of their cosmetic items.

Here are the best wheels in Rocket League.

The Fast and the Furious franchise may have lost its mojo over the years due to repetitive additions to the series, but it took all the fans on a journey around the world in the last 15 years. One of these stops was Tokyo, where cars shed light into the night with neon modifications.

Though the stadium lights always shine bright in Rocket League, you can appreciate the lights coming out of Apex Wheels.

The fans who watched the RLCS 2017 live on Twitch were able to receive Apex Wheels as a random drop. They haven’t been available inside the in-game shop ever since and you can only obtain them through trading.

Though cosmetics may be the perfect way to make your car stand out, there are also players who are looking to do the exact opposite. Competitive players, for example, try to use some of the most subtle cosmetic items, so their cars don’t disrupt their focus.

Cristiano Wheels don’t feature any shiny elements, but they’re still a popular choice across the player base. A secondary reason behind their fame is that they’re quite easy to unlock. You’ll only need to purchase the Supersonic Fury DLC and the wheels will be automatically added to your account.

There are wheels for all sorts of occasions in Rocket League. If you’re looking for a more simplistic approach to designing your vehicle, you’ll want the sleekest wheels you can get your hands on.

Dieci looks like your standard racing wheels and there are a handful of color options to choose from. The Black Dieci version of the item is also one of the rarest cosmetics in the game, but the other variations of the item are pretty common and you may even have a couple of them in your inventory.

It’s possible to turn a pitch into your personal disco with animations and cosmetic items. You may need to score often to completely take over the vibe of a match and the Discotheque Wheels will let the rest of the lobby know what they’re in for.

The Discotheque Wheels are one of the best-animated cosmetics in the game and they blend perfectly with bright and shiny cosmetics.

Most wheels feature cool designs that add a certain value to cars. While the inside of a wheel may look dull in real life, it’s the opposite in Rocket League.

The Glaive Inverted Wheels have a futuristic design that practically turns your car into a war machine, potentially produced by Tony Stark. The default color of this item goes well with pretty much all metallic styles you may have, but you can also spice it up with its different color variations.

Each cosmetic item slot can be used to increase your prestige as a player. If you equip some of the rarest cosmetics items, you’ll give the impression that you’ve been playing Rocket League since the beginning of time.

These rare cosmetics also look super cool, however, and Goldstone Wheels are one of the better ones. These orange/golden wheels are quite expensive and they’ll always stand out no matter the general color theme of your setup.

Infinium Wheels are the perfect choice if you’re looking to play Rocket League from the future while everyone else is stuck in the present. These futuristic wheels give off a TRON vibe and they go pretty well with vehicle skins that feature neon colors.

Even if you’re the best player in the world, you can still have off days when you just can’t seem to perform up to your standards. If you’re an under-performer, however, you’ll want to celebrate every time that you’re on fire. When you start scoring goals left and right while defending against some of the most fierce attacks, your squad will probably start questioning who they’re playing with.

Decorating your car with ember tones and fiery elements will let your next opponents know about who to watch out for. Pyrrho is will be the perfect choice with any dark red and orange theme you may have going on in your setup.

Vehicles in Rocket League never seem to run out of fuel. There’s a chance they may be fueling up enough for a match during loading screens, or there might be a mystery to solve.

Keeping your vehicle’s design more professional can also allow you to focus on your game since shiny cosmetics tend to be quite distractive. The SLK wheels are one of the most simple-looking ones in the game with the most amount of sleekness.

The SLK wheels work wonderfully when it comes to complimenting setups that feature only a single color. They’re quite rare, however, and you’ll only be able to get a copy of them through trading.

There’s always that one player who’s just all around the pitch. They score, assist, defend all the shots and just leave no room for the opposition. There will be times when you won’t be able to keep up with them at all, making you question the source of their speed.

Though there can be a couple of logical explanations, they may also just identify themselves as the Flash from the DC universe, rocking the Flash wheels. This cosmetic item features the core elements of the Flash’s style alongside lightning effects.

Yamane wheels are another solid choice for anyone looking for a nice and subtle design. These wheels almost resemble an atom and they make your car stand out as you get faster.

There are a total of 13 color options for Yamane Wheels, meaning you can find one for pretty much every setup.

Out-playing your opponents is one way of assuring your victory. You can also try hypnotizing them with Zomba Wheels and convince them to finally let you score.

Zomba Wheels feature a fluid animation that may make you focus more on your wheels than actually focusing on the match. The wide color palette of the wheel means there’s a Zomba Wheel for all color themes.