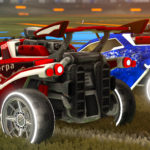 Winning matches and climbing up Rocket League’s ranked ladder is the ultimate goal of many players. But even with enough skill, your success may not mean much to some if you don’t do it in style.

Cosmetics in Rocket League allow players to decorate their vehicles to stand out more in the field. Combined with animations, you can draw all the eyes on the pitch and blow everyone away with your sense of style. Though there are countless skins in the game, some start going extinct after they’re taken off the shelves as items get scarcer over time, both their monetary and sentimental value increase.

When you equip the rarest cosmetics in Rocket League, you’ll be able to showcase how long you’ve been playing the game. Most of these items will only be obtainable through trading, and you may want to get your wallet ready if you’re looking to collect them all.

Here are the rarest items in Rocket League.

You won’t see many players using antennas in pro play due to how distracting they can be. While they’re an excellent way of decorating your vehicle, they jiggle around way too much. This rule often gets broken, however, if a player has an ultra-rare antenna.

Gold Nugget is potentially the rarest antenna in the game. It was awarded to players who participated in Rocket League’s beta in 2014. You can only obtain this item through trading. Considering the number of accounts that’ve been active since the beta, this item’s price can reach astronomical numbers.

Alpha/beta cosmetics may look outdated than the current ones, but they still have enough swag to be relevant. Gold Cap is even rarer than the Gold Nugget Antenna since it was only given to players who were active during Rocket League’s alpha stage.

An “Alpha” writing is engraved in front of the game, allowing you to showcase that you’ve been in Rocket League since the beginning.

Dieci wheels are actually quite common. Most players may have the default version of the item in their inventories, but its variations are noticeably more difficult to come by. The default Dieci wheels are labeled as common in terms of rarity, while the painted ones are exotic.

The Black Dieci wheels are one of the most expensive wheels on the market, making them quite difficult to obtain. You’ll only be able to get a copy through trading.

There have been many cool boost animations in Rocket League. None come close to Gold Rush in terms of prestige, however.

Gold Rush was awarded to alpha stage participants around 2014, and it’s also the go-to boost animation of quite a few professional players. Like exclusive items, it’s impossible to receive a Gold Rush as an in-game drop, and you’ll need to get your copy through trading.

Psyonix must consider every alpha player as golden since it looks to be the theme of all the alpha rewards.

Goldstone wheels were also given out to players who played in the alpha, and the only way to get a copy of them is through trading. Like most alpha-only items, they cost a small fortune, making them even rarer.

There are certain experiences you just need to be present to truly understand the hype. Rocket League LAN events are an excellent example of this since they’re filled with action. Not only you’ll get to watch the best Rocket League gameplay of the year, but you’ll also be welcomed with gifts.

Decennium Pro Wheels were handed out to all the attendees of the RLCS World Championship during season three. They unlocked through one-time-only redeemable codes. Unlike most items on our list, it isn’t possible to trade Decennium Pro Wheels, meaning you’ll need to find an unclaimed code to get a copy.

Though it’s been a while since the LAN event, it’s possible to find codes on online marketplaces.

You can play Rocket League with any type of music in the background, but Rocket League x Monstercat: Greatest Hits vinyl was just something else. The popular music producer went all in to create tracks that reflect a Rocket League player’s emotions during intense matches.

The vinyl didn’t hit the market with empty hands, however. Anyone who preordered it received the Monstercat Wheels. Though the gift pack included other Monstercat-themed items, the wheels stood out with their passive sounds. You can lose yourself to the rhythm of your wheels as you drive around.

Purchasing the vinyl right now won’t be enough to receive the Monstercat cosmetics since they were exclusive to the pre-purchasers.

Not everything has to be a limited-time deal to be rare. Twitch drops make up another set of rare items in Rocket League due to their low drop rates.

The Grey Apex Wheels are practically a random Twitch drop that you could obtain through watching competitive Rocket League matches. You’ll need to link your Rocket League account with your Twitch username to be eligible for drops. Once you figure that out, all you have left to do will be enjoying the matches and keeping your fingers crossed.

There are more than a handful of vehicle types in Rocket League, each specializing in different aspects of the game. Some of them will be better for dribbling while others will shine at trick shots.

While Dominus may not be the most popular vehicle type in the game, it’s still a common choice amongst freestylers. The Titanium White Dominus was available through crafting back in the day, but it was removed as more skins were introduced to the game.

If you’ve set your eyes on this skin, your best bet will be finding one on the market.

Octane is, hands down, the most popular vehicle type in Rocket League. It’s the perfect all-rounder, and it doesn’t have any shortcomings.

Like Dominus’ Titanium White version, this one could also be crafted. While it isn’t listed on the crafting list anymore, it’s still one of the most popular Octane paints due to its sleek colors. To find a Titanium White Octane, you’ll need to surf through the market.

You just had to be there to receive some of the rarest cosmetics in the game. While this makes them quite valuable for the owners, it may feel bad for other players looking to get them at a later date.

White Hat Topper goes completely against the narrative in that sense, but you’ll need a couple of technical skills to get one. This cosmetic was only awarded to players who’ve found game-breaking glitches or exploits in Rocket League. While this item is tradeable, it’s almost impossible to find on any marketplaces.

Due to the extremely scarce supply, your best bet to get a White Hat Topper will be by testing Rocket League for bugs on a regular basis.