Pokémon fans have a lot to look forward to this year, with Pokémon Scarlet and Violet premiering the ninth generation of the franchise in November 2022. This new set of games will bring players into a new region, with new and old Pokémon alike appearing along their journey.

Just like with the reveal of Sword and Shield in Feb. 2019, players only got a brief glimpse of the region and gameplay that will be featured in Scarlet and Violet. However, in those passing shots, TPC showcased a lot of content that will be included in the newest Pokémon games, with some additional details shared after the reveal.

For the Starters, players can choose to team up with Sprigatito, the Grass Cat Pokémon, Fuecoco, the Fire Croc Pokémon, or Quaxly, the Duckling Pokémon. Outside of their design, names, and typing, not much else is known about this trio of first partners.

As noted by TPC after the games’ reveal, Scarlet and Violet are what Game Freak is calling its first true attempt at an open-world game for the franchise, iterating on the technology used when developing Pokémon Legends: Arceus.

Specifically, the developers note players can “explore an open world where various towns with no borders blend seamlessly into the wilderness.” Additionally, Pokémon will remain in the overworld, appearing in the air, on land, and in bodies of water across the new region.

Speculation is already rampant about the setting of this new journey since TPC didn’t confirm a name or even give a description of its most prominent features. 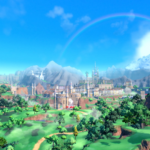 For the time being, fans have settled on pointing to Scarlet and Violet taking place in a region based on Spain and Portugal thanks to some of the buildings and images shown in the trailer. The names of the Starters also have a strong root in the Spanish language, which is likely another hint at the origins of the region’s inspiration.

TPC did confirm Scarlet and Violet will support connectivity with Pokémon HOME after they launch, but with the usual caveat of every game only receiving species of Pokémon that can be found or are listed as compatible for that title. This likely means the new games will follow the same development model used in Sword and Shield and Legends: Arceus, where Game Freak limits the number of Pokémon featured in the game to focus on improving the models and features of the species available in those games. 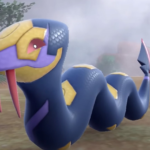 Players saw just how big a difference this method can make in Legends: Arceus with the enhanced Pokémon models and animations, which seem to be carrying over to Scarlet and Violet based on early footage of Pokémon like Seviper and Larvitar.