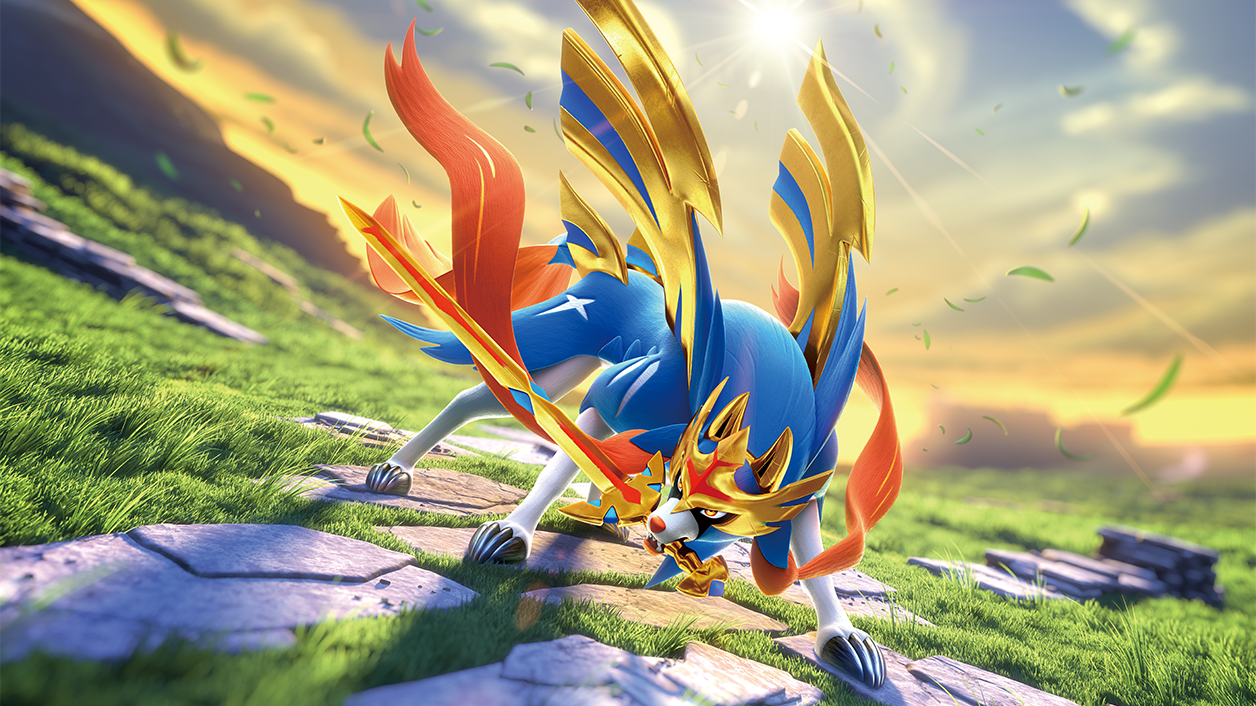 Pokémon isn’t known for it’s scary looking animals. One of the world’s most fearsome-looking and meanest animals is the wolf. This canine creature is often depicted as a predator, establishing a presence seen as cruel, brutal, and dominant on those occasions when a person or another animal encounters a wolf in the wild.

Wolves have also become a visual basis for some of the menacing creatures from some of the stories that we know, ranging from the mythical Fenrir from Norse mythology to the big bad wolf, the antagonist in the Little Red Riding Hood story. And in the colorful and playful world of Pokémon, wolves are also rampant.

Some Pokémon are based on wolves, with some regarded as the typical predator, but some are also seen as cute creatures. But depending on which angle you can look through them, there will always be some standouts in the pack of wolf Pokémon.

Here is our list of the best wolf Pokémon, ranked based on abilities, looks, significance to the story, and overall impact on the community.

Lycanroc’s evolution (or evolutions) is the more viable option in terms of powers and abilities, given that Rockruff’s stats aren’t that impressive to be used in combat.

Still, its looks provide a different perspective towards wolves, giving their baby versions some spotlight when it comes to cuteness. Rockruff’s eyes can be described as something that can talk, and maybe we can’t resist.

When we talk about cuteness, Boltund’s basic version, Yamper, is the obvious pick. But when it comes to being a wolf-like Pokémon, Boltund is a much better option. Even if its round eyes can still be labeled adorable and shining, this Electric-type can do wonders in battles, embodying the aggressive vibe a wolf can give.

Boltund has an impressive 121-speed stat, making a base stat total of 490. Its HP is a bit low, though, listed at 69. But this Pokémon can do some of the flashiest Electric-type moves in the game, such as Spark, Wild Charge, and Electric Terrain. Boltund may do good when you try to make it a pet or a travel buddy, but it can also be a viable weapon when needed in combat.

One of the most unusual picks on our list, Absol, the Generation III Pokémon, may not look like a wolf at first glance. Its body is covered with white fur, while its features somehow depict a camel with lesser lumps.

But, when it does some facial expression, this is where you can see its menacing attitude, which could be compared to how a wolf behaves.

Absol’s neutral, mysterious vibe that can become dangerous is encompassed by its impressive stats. It has a powerful attack stat of 130 and 150 in Mega Evolution, while it lists a base stat total of 465 for its normal version, and the Mega Evolution is at 565. Absol being a Dark-type Pokémon grants it access to moves such as Knock Off, Night Slash, and Sucker Punch.

Rockruff is really adorable and cute in all of its aspects. But if you want a wolf-like Pokémon which is still cute yet has a more aggressive vibe than Rockruff, then Poochyena could be your best choice. Mightyena’s baby version may not be the best when it comes to combat, but this little creature resembles what looks close to being a fierce baby wolf.

Poochyena’s debut in the anime series already showed that it has a fierce natural vibe. In the episode titled Get the Show on the Road, a bunch of Poochyena chased and attacked Professor Birch. This alone makes our cute yet wild baby wolf Pokémon a potential threat. And when it evolves into Mightyena, it is a different case since it can be hard to deal with in its attitude and moves.

Lucario, a Pokémon that can talk and stand with both of its feet, greatly depicts Anubis, a known Egyptian with the head of a wolf. This alone makes the dual-type Fighting/Steel Pokémon a candidate on our list, alongside its great prowess in terms of combat.

Lucario has an impressive base stat total of 525, listing 110 on its attack and 115 on special attack. But its potential could be unlocked when it Mega Evolves, where it raises Mega Lucario’s base stat total for up to 625 (145 of this is for its attack stat, while 140 is for its special attack). Some moves included in Lucaro’s arsenal of combat attacks include Metal Claw, Dragon Pulse, Extreme Speed, and Close Combat. It also starred in a handful of Pokémon movies, including the 2005 film Lucario and the Mystery of Mew.

If you look at Manectric’s colors, neither its yellow nor blue shade indicates that it could look like a wolf. But its statute says otherwise, and being a canine Pokémon already makes it one natural predator that could be even stronger thanks to Manectric’s Electric-type moves and abilities.

Manectric was introduced in Generation III, and is the signature Pokémon of the Hoenn region’s Electric-type Gym Leader, Wattson. Manectric stands out as a high speed and special attack Pokémon, listing a 105 stat for each, and a base stat total of 75. Some of its moves include Discharge, Wild Charge, and Thunder, and Manectric can also Mega Evolve. Just don’t be surprised once it does, since maybe all you can see is a huge lightning bolt with a bit of Manectric.

The Legendary banner Pokémons of the Sword and Shield series, Zacian and Zamazenta, had become some of the best battle options when they arrived through the mainline games. Both Zacian and Zamazenta are Steel-type, with the former embodying the symbol of sword and focusing more on the attack, while the latter carries the shield banner and focuses heavily on defense.

They also share the same base stat total, listing up to 670 when they are in their base forms, and a powerful 720 upon entering their Crowned forms. As for their looks, Zacian and Zamazenta are canine creatures, with their wolf-like eyes giving a neutral yet aggressive look. But their elegant looks when they transform into their Crowned forms make them extraordinary wolves that wield great power and significance to the story, especially to the Galar region.

Being fierce is an understatement to describe Mightyena. This Hyena slash Wolf creature is menacing at first glance. A Pokémon can give off a really intimidating aura, especially with its teeth showing almost all the time. It can easily scare off other Pokémon, whether in combat or just being in the wild.

But aside from its already wolf-like features, Mightyena is no stranger when it comes to being powerful in actual battles. It has a good base stat total of 420 and can use moves such as Crunch, Sucker Punch, and Play Rough. It already looks like a total force to be reckoned with when you see it, but just imagine if there would be a Mega Evolution of Mightyena in the future. That would just be a killer in stats and design and could definitely seal the deal for it to be one of the best wolf Pokémon.

Zoroark has a mix of a wolf and fox-like creature, though it is fully covered in grayish black fur with some red highlights. It also is bipedal, meaning it can stand with both of its feet and may not resemble the usual quadrupedal stature of the wolves. But what makes Zoroark sit on the second spot on our list is its powerful abilities that are seen during combat.

Zoroark has access to many Dark-type moves, such as Night Slash, Night Daze, and Foul Play. It has a base stat total of 510, and 120 is listed for its special attack stat. Zoroark starred in a Pokémon movie, namely Pokémon – Zoroark: Master of Illusions. This shows how impactful Zoruark is in the world of Pokémon and how it can be regarded as a great choice when determining some of the best wolf Pokémon in the franchise.

The Pokémon that takes the top spot on our list is the one that could be considered the closest representation of a wolf in the vast and diverse world of Pokémon, which is none other than Lycanroc.

Just by its looks, Lycanroc already resembles a wolf. From its head, nose, mouth, fangs, body, fur, tail, and almost everything, this Pokémon embodies a wolf’s aesthetic and spirit. Another bonus is that it has three forms, meaning that it can enter into three different forms of a wolf. When it enters either of its three forms, its red eyes are just the meanest wolf eyes you can ever encounter in the Pokémon world.

All of Lycanroc’s forms list a base stat total of 487. It can also use a diverse arsenal of moves, such as Rock Slide, Crunch, and Stone Edge.

Indeed, Lycanroc is the best wolf Pokémon out there, and you should be really careful when you have a chance to encounter it in the games—you’ve been warned!