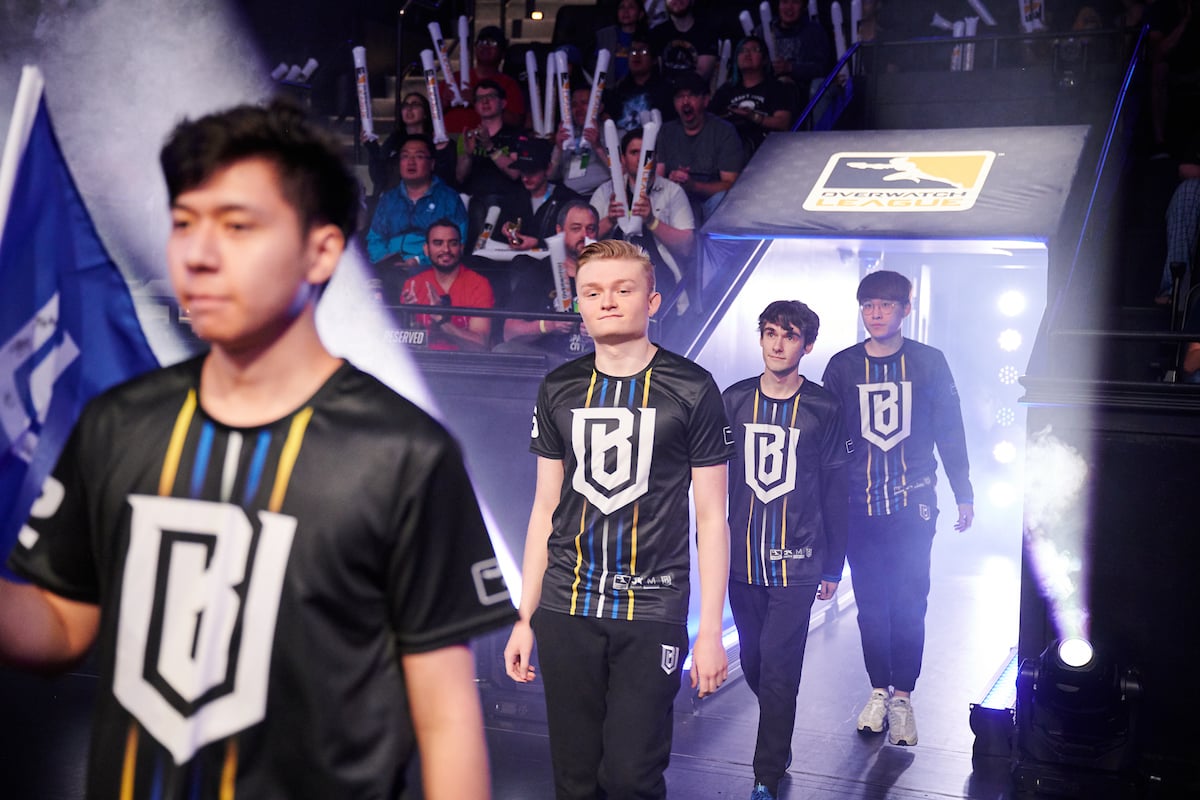 On the second day of the Overwatch League postseason, all eyes were on off-tanks as eight teams fought to continue their journey in regional brackets. A new meta has emerged, thanks to an extensive game patch, that brings hitscan DPS and tanks like Roadhog and Zarya into the limelight.

Unfortunately for some teams, their foray into this new meta ends today. Two teams, the Houston Outlaws and Vancouver Titans, were eliminated in the Sept. 3 matches. Four more teams were taken out of contention in these Sept. 4 showdowns.

For two years, the Chengdu Hunters have thrived off of chaos. This new playoff meta, which revolves around clutch DPS plays and off-tank mastery, almost seems tailored for the panda crew.

The London Spitfire’s rookie squad put up a good fight, but weren’t quite able to temper down the Hunters’ absolute mastery of the current clown fiesta meta. Main tank and Wrecking Ball expert Ding “Ameng” Menghan ran amok during this series, especially on Hybrid map King’s Row and Escort map Havana. Ameng’s rolling mayhem, combined with the deep hero pool of Yi “Jinmu” Hu, sent the Chengdu Hunters straight to the next round of the playoffs.

Playoff games often bring out the best in teams that have underperformed in the regular season. For both the Los Angeles Gladiators and the Toronto Defiant, this do-or-die game was the fire that set their players alight.

After missing the first map due to illness, Gladiators DPS carry Kim “Birdring” Ji-hyuk subbed himself back in to support his team. While his god-tier hitscan plays were a big difference maker in the series, the Toronto Defiant players were no slouches. Defiant DPS Brady “Agilities” Girardi brought out his best Roadhog play alongside Andreas “Logix” Berghmans, taking first map Ilios and Escort map Dorado.

Lijiang Tower was the final destination of this five-map series. As if to prove the team is more than just the Birdring show, Gladiators main tank Son “OGE” Min-seok and DPS Kevin “Kevster” Persson worked together to beat back the Defiant onslaught. Toronto fans should take heart that this match was well-fought when it really mattered.

After the Boston Uprising took an upset win against the Houston Outlaws in yesterday’s knockout rounds, some die-hard fans expected them to keep that momentum going. Unfortunately for Boston, the Atlanta Reign squad looked more polished than they have in weeks.

For what it’s worth, Boston kept the series more competitive than many analysts expected. Perpetual Boston carry flex support Seo “Myunbong” Sang-min found himself putting down many of Atlanta’s players down for a nap throughout the match. Blake “Gator” Scott still managed to pop off for the Reign despite this meta’s significant lack of main tanks, but it was flex support Dusttin “Dogman” Bowerman that kept his team healed up and ready to face Boston.

Though the Atlanta Reign took this series, the scoreline doesn’t necessarily tell the whole story. For a team that won two games throughout the entire 2020 Overwatch League season, it was inspiring to see the Boston Uprising fight back instead of just letting the inevitable happen.

After Dallas Fuel DPS Jang “Decay” Gui-un was unceremoniously released from the Fuel, fans have demanded justice for Decay. The Washington Justice, which signed Decay shortly after his release, helped facilitate his revenge with a devastating 3-0 sweep.

Despite a relatively successful season, the Dallas Fuel looked to be out of their element in this new meta. Hybrid map Numbani, in particular, showed a critical lack of planning by the Fuel as the team opted to run Genji after extensive nerfs to the hero. Decay, playing Zarya, stood atop the payload and waved victoriously as the Justice fully held Dallas on the first point.

The Justice had a monumental game, but in the end, it seemed to be Dallas that defeated themselves by underestimating their opponents.

In the Asia region, the Chengdu Hunters move on in the playoffs and join the Seoul Dynasty, who had a bye, in the next round of single-elimination playoff games. Both teams were selected by their higher-seeded opponents.

The three teams that won the Sept. 4 matches, as well as the Los Angeles Valiant, move on to face the top four seeds in North America on Sept. 5. As of tomorrow, all teams will participate in a double-elimination bracket.