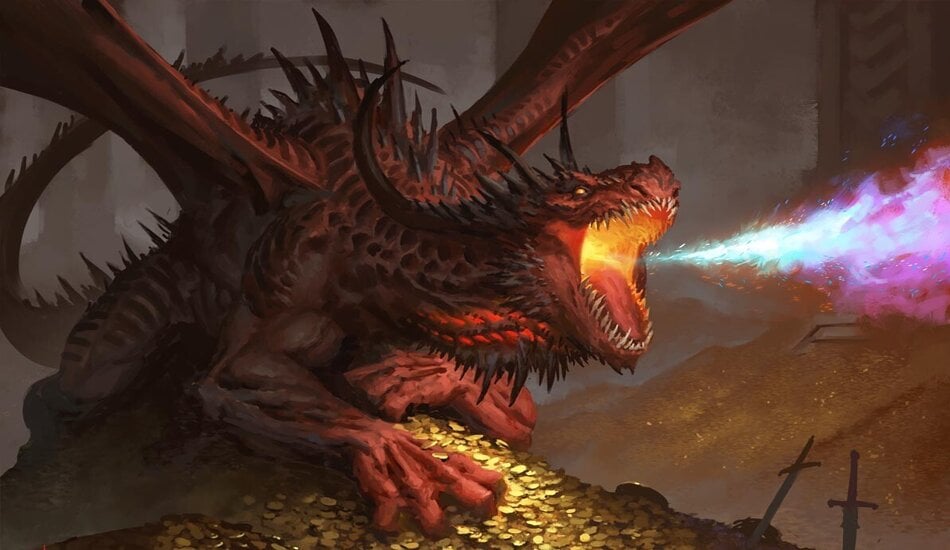 The MTG Core Set 2020 is live on MTG Arena and we’ve got the top seven Red cards you want to draft and three to avoid in an MTG Limited Draft format.

Chandra is the face of M20, which is why a predominant theme in Red is aggro damage through burn. Additional themes include goblins and elementals. Of all the MTG colors, Red has the most elemental cards (eight), followed by Green (seven), Blue (four), and multicolored (four).

Building around the elemental theme is wise, but not always possible in a Draft format. But don’t fret because Red in the M20 set has a decent amount of flyers and ground creatures, in addition to the burn and elemental themes. We’ve broken down a healthy mix of Common and Uncommon Red cards to improve your decks in an M20 Limited Draft format.

There are a good amount of flyers in M20, which is only one of the reasons Rapacious Dragon takes the number one spot. As a three/three flyer who costs five mana (one red), this dragon is an average pick. When Rapacious Dragon comes onto the battlefield, however, it creates two Treasure Tokens. Having access to mana of any color opens up the possibilities in a Draft deck and can be a total game-changer.

For the cheap cost of two mana (one red), Unchained Berserker slides nicely into Aggro decks as a one/three who gains plus two/plus zero when attacking. As an added bonus, he also has protection from Blue and White. While the protection mechanic won’t be beneficial in every match, matchups will still take place where it will change the course of a match. Plus, his attack and cheap mana cost alone is worth putting him in your main deck.

If you’re lucky enough to grab six or seven elementals, Chandra, Novice Pyromancer is a great addition to your deck. Even without the elemental theme, though, she’s doing a decent amount of damage through her minus-two, which acts like a Shock. And if you’re ever in a pinch, her minus-one provides two red mana.

Having a cost of double red is a slight downfall for Ember Hauler, but his ability to tap one and sacrifice to deal two damage upon any target makes it worthy. Most flyers in M20 have a defense of two or less, making them an ideal target for Ember Hauler. Plus, he’s a solid two/two who can get out on the battlefield early for combat damage.

Working in conjunction with Ember Hauler and Chandra Novice Pyromancer is Chandra’s Spitfire. A decent card on its own as a one/three flyer, Spitfire gains plus three/plus zero when non-combat damage is done to an opponent. Having a four/one attack on turn four when combined with Shock or Ember Hauler makes Chandra’s Spitfire an Uncommon worth adding.

Having a solid combat trick in your deck never hurts, and when combined with a trample Green card, Uncaged Fury reaches its full potential. Providing plus one/plus one and double strike to a creature makes this instant great for removal and combat damage.

Speaking of removal, Chandra’s Outrage is a solid option. Especially with the two additional damage, she does to your opponent after firing off four damage towards one of their creatures. As a Common, her removal and additional damage dealt is worth the four mana (double red) cost.

Red Uncommons and Commons to avoid

Tectonic Rift is a card designed for a specific use, and the M20 Limited Draft is not it. Removing flyers from blocking while destroying a land doesn’t have any worth in the matchups you’ll be facing. This is especially true at a four mana (one red) cost.

Maniacal Rage is an Aura that beefs up a creature by plus two/plus two but makes them where they can’t block. Normally not a good card in any set, she’s especially lousy an M20 Limited Draft format.

As a single red mana one/one, Scorch Spitter doesn’t provide aggro or depth to your deck. It deals one damage upon a player or planeswalker when attacking, but will likely be chump blocked on turn two since it doesn’t have haste.