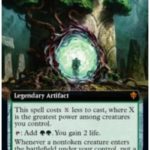 A unique Magic: The Gathering set full of folklore spells and fairytale creatures has maintained its value throughout a pandemic, with a number of Throne of Eldraine cards still worth money.

Booster fun for the Throne of Eldraine included Showcase Adventure cards, extended-art, and borderless versions that are worth money. Of the most recent Magic sets that have rotated out of Standard in the past few years, ELD contains the most cards that are still valuable on the secondary market.

From a Green Legendary Artifact to an infamous faerie rogue, here are the ELD cards worth money, according to MTGGoldfish, MTGStocks, and Card Kingdom.

The Great Henge was one of the best Artifacts in the ELD set. It was a bomb in Standard and continues to get played within the MTG Commander format. The extended-art foil version of The Great Henge is priced greatly above $100, valued at around $270.

The prerelease foil promo of the legendary Artifact is priced at around $95, while the planeswalker foil stamp is worth $60, the foil version is $66, and the non-foil extended-art is $77. The regular version of The Great Henge is still priced at around $55.

Oko, Thief of Crowns just won’t go away, despite being banned in just about every major MTG format. Once priced at $60, the regular version of the Planeswalker fell to around $17, and then $12. But the infamous ELD planeswalker still has versions on the secondary market that are worth money.

The borderless foil version of Oko, Thief of Crowns is worth around $81. Prices drop off for other variants, with the prerelease promo foil version priced at $34 and the planeswalker foil stamp valued at $35.

Following the ban of Oko, Brazen Borrower rose in price and was one of the most-played cards in Standard. The faerie rogue continues to get played in formats like Modern and Legacy and has a Showcase foil ELD version that is worth around $80.

Emry, Lurker of the Loch

Once a $5 Legendary Artifact, Embercleave rose dramatically in price thanks to Mythic Championship V. The regular ELD version dropped back to $7, along with other variants priced between $8 and $20. Embercleave still has one version worth money, though, with its extended-art foil version valued at around $76.

Despite the COVID-19 pandemic, Questing Beast kept its value throughout its run in Standard. Most variations of the beast have dropped in price since rotation, with the extended-art foil version being an exception, priced at $70. Other versions of Questing Beast are valued between $10 and $20, with the regular version worth $8.

Still played in the Modern format, Castle Vantress is an ELD land that players can pick up for under $5. The Scry land has an extended-art foil version, though, which is valued at around $60.

Popular within the MTG Commander format, Wishclaw Talisman has two ELD variations worth money. The extended-art foil version of the Artifact is worth around $45 and the non-foil version is priced at $10, along with the prerelease foil promo. All other versions of Wishclaw Talisman are under $5.

All images via WoTC, Magic: The Gathering.