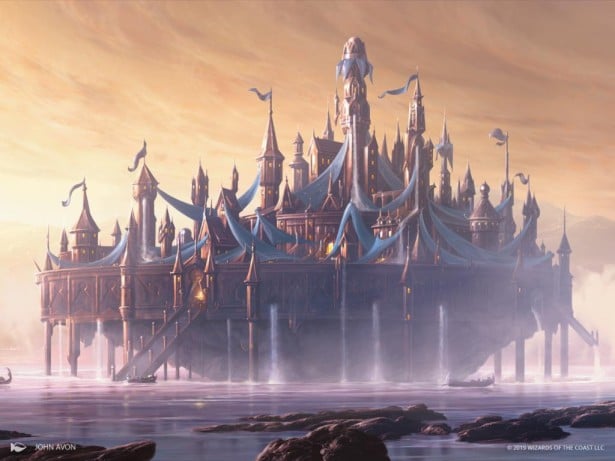 Spoiler season is quickly approaching in the world of Magic: The Gathering and with it comes an explanation of the new Adventure mechanic in the Throne of Eldraine set.

Releasing on Oct. 4, Throne of Eldraine is full of fairy tale themes, newly-designed cards, and a mechanic called Adventure. Magic designer Gavin Verhey explained that the Adventure mechanic is an alternative spell connected with a creature spell (similar to split cards). The difference, however, is that both sides of the card can be used.

“You can always play a card for its normal mana cost, in the top right,” Verhey told IGN. “Or if it’s in your hand, you can pay the adventure cost and send it away on an adventure! It’ll do the effect in the adventure textbox, you’ll exile the card, and then you can still cast it later on.”

Looking at the Flaxen Intruder spoiler from yesterday, she has a regular spell cast for one green mana and an Adventure cast for seven mana (two green). During the beginning of a match, she’s an early drop that’s a one/two. Later in matches, her card still holds value by casting the Adventure spell from hand. A player then has the ability to cast Flaxen Intruder from exile.

Related: Magic finds love with a Lovestruck Beast, a new card for Throne of Eldraine

Several questions remain in regards to the nitty-gritty details of the Adventure mechanic, however. How does it interact with counterspells (especially when Adventure is cast first) and what happens if a card with Adventure is exiled while on the battlefield?

The Throne of Eldraine set releases on Oct. 4 via tabletop and Sept. 26 via MTG Arena and MTGO. Pre-release for the MTG set will take place Sept. 27 to Sept. 29.

Update Sept. 4 1pm CT: Casting either the creature or Adventure part will result in the card being placed on the stack as normal, according to WotC. Both can also be countered with a counterspell. The Adventure spell of the storybook card can only be cast from a player’s hand, not while the creature is on the battlefield, in the graveyard, or exiled.

Casting the Adventure spell puts the creature portion of the card in exile, from which a player can cast it out onto the battlefield whenever a sorcery spell can be cast. Cards that allow a player to search their library for a creature will reveal the split storybook card. But spells that allow players to search for instants and sorceries won’t reveal it.

“While Beanstalk Giant is on the battlefield, just ignore the Adventure and all its text,” Matt Tabak said in his ELD mechanics article. “While the card is in your hand, your graveyard, your library, even exile, it has only the characteristics of the creature, not the Adventure.