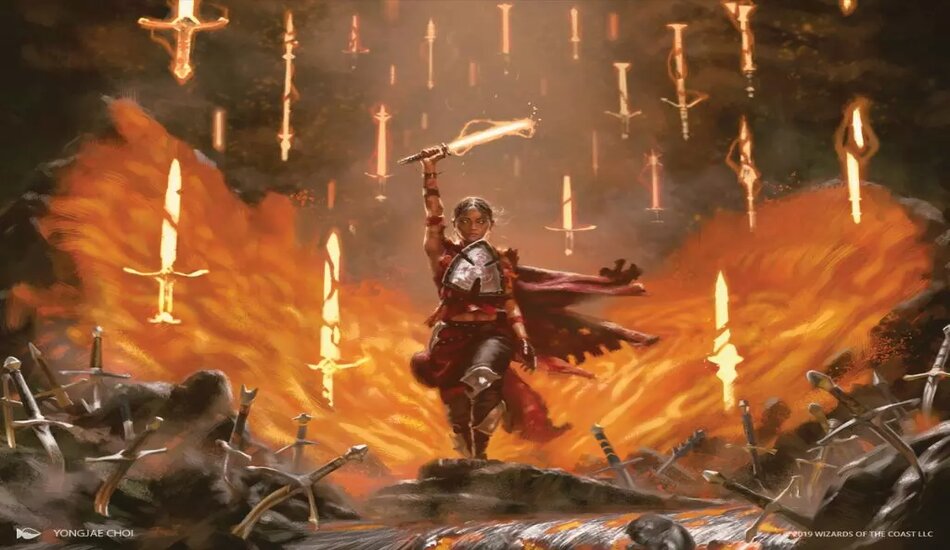 Week one of Throne of Eldraine spoilers wraps up on none other than a full harvest moon Friday the 13th with broken artifact creatures and bone-crushing storybook giants.

With pre-release just around the corner, the Throne of Eldraine (ELD) set continues to roll out with a wide array of Magic: The Gathering spoilers today.

Set to release on Oct. 4, it was revealed today that the Adventure mechanic was a last-minute ELD addon. According to Andrew Brown, Adventure was a “split-decision mechanic” implemented to spice up Standard within the Throne of Eldraine set.

It was also revealed today that the 2:1 wildcard redemption is no more. With a soft launch of Historic occurring simultaneously with the release of ELD, several updated changes have been made to the format.

Within ELD spoilers, Artifact and non-human creatures cards were the focus today. A Mythic Rare artifact in Blue was revealed, along with a serpent who fits right into any mana curve slot. So, without further ramblings, here is every Throne of Eldraine spoiler from Sept. 13.

Niv-Mizzet has a new best friend in Faeburrow Elder. Getting +1/+1 counters is nice, but Elder’s true potential lies within producing one mana for each color represented among permanents a player controls. Even with Faeburrow Elder being the only creature on the battlefield, it still provides two additional mana when tapped (Green and White).

Thanks to Google Translate and a Reddit user, Stonecoil Serpent will forever be known as “Stone and Tuna Sea Snake.” But don’t count this Tuna Sea Snake out, as its essentially a beefed-up reprint of Endless One.

Translation for Stonecoil Serpent is as follows:

Hitting the curve just right when you need it to, Stonecoil Serpent is an ELD Artifact Teferi, Time Raveler players should fear.

Despite the illusion of “group hugs” in Commander, Folio of Fancies is designed to be a finisher. Likely not playable in Standard, except under jank conditions, this blue artifact isn’t for everyone. But for those seeking to destroy the meta with unusual tactics, Folio of Fancies slides nicely into a Tempo Control deck.

Dance of the Manse

The MTG design team promised nothing juvenile past gingerbread cookies, and yet, singing “Be our guest” instantly triggers upon viewing Dance of the Manse. Favoring the Commander format, Manse might work in Standard jank but isn’t likely to be favored in Limited.

Vantress Gargoyle is a top-notch card across multiple MTG formats. It’s a two-drop that comes into play as a 5/4 flying Defender, as long as you have four cards in hand at all times. It can also attack if an opponent has seven or more cards in their graveyard. Graveyard decks, beware of the Vantress Gargoyle.

Adding spice to the Adventure mechanic cards, Bonecrusher Giant might be the best ELD Showcase spoiler so far. As a creature, it drops in on turn three as a 4/3 who Shocks an opponent when targeted by a spell. Stomp isn’t too bad either, preventing damage and dealing two out at instant speed for the cost of two mana.

Revenge of Ravens is the fifth card in ELD with a draining effect. A nice sideboard answer to Cavalcade, Ravens produces life while slowing taking out your opponent.

The Magic Mirror is an interesting Mythic Rare Artifact. It fits in reanimator decks, producing cantrip while not limiting hand size. It also costs one less to cast for every Instant and Sorcery in the graveyard (Izzet Phoenix).

Feeding the fires of Drakuseth, Maw of Flames, Irencrag Feat also has the potential to beef up a solid Hydroid Krasis. It’s a shame, however, that Banefire is rotating out of Standard.

Mirrormade caters towards Artifact and Enchantment decks, producing a copy of either one upon entering the battlefield. It only costs three mana (typical Enchantment three-drop) and will pull its value in a variety of MTG formats.

A sweet four mana hybrid flyer, Loch Dragon doesn’t fit into an Izzet deck well. It may prove useful in Limited, but in Standard, it seems to be a bust upon first glance.

Also slightly on the disappointing side is Redcap Raiders. As a 2/3 three-drop, it only powers up when attacking and tapping a non-human creature you control.

Barge In is a Shrek look-a-like Instant that provides attacking beef when hitting an opponent with non-human creatures. There’s a tribal theme waiting to be built, but it’s uncertain if it will be any good.

Ferocity of the Wilds

Another three-drop Enchantment that strengthens non-human creatures, Ferocity of the Wilds only benefit is that it provides trample.

The leader of non-human tribal themed decks, Grumgully, the Generous is a legendary 3/3 for three. Adding +1/+1 counters to each non-human who enters the battlefield might be decent, but could also be a flop in Standard too.

Sundering Stroke favors mono-colored Red, providing a finishing move if a player casts it with all red mana. A sideboard card for sure in Standard, and possibly a decent finisher for a Mono-Red deck in Limited.

The Throne of Eldraine set releases on Oct. 4, and via MTG Arena on Sept. 26.