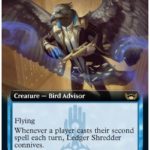 The recent Streets of New Capenna set is having an impact on multiple Magic: The Gathering format metas while also containing a number of cards worth money.

Having released globally on April 29, a handful of cards from the Streets of New Capenna (SNC) set have had a direct impact on multiple Magic formats. The set contained five unique mechanics, each tied to the five crime boss families, with the Connive mechanic standing out from the pack. From cards like Raffine, Scheming Seer to Ledger Shredder, the Connive mechanic has altered the meta of several Magic formats.

Included in the set was the completion of the Triome land cycle, now called Tri-lands, providing mana fixing across multiple formats. And the return of Ob Nixilis to Standard has revived the meta while the planeswalker has become the most expensive card in the New Capenna set.

Here are the five best New Capenna cards to pull. 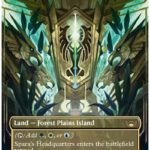 Completing a cycle of three color lands that were first featured in Ikoria: Lair of Behemoths, the SNC Tri-lands are the best pulls to get from a New Capenna booster pack, playable in any Magic format. Considered a basic land, the allied colored Shards (as they were called in Shards of Alara) provide mana fixing for popular three-colored decks. These lands also contain the MTG Cycling keyword, providing players card advantage during the late-game stages or upon mana flooding.

The New Capenna Tri-lands are the most expensive lands in the set via their borderless foil versions, with each of the lands valued between $50 and $55. Regular versions are priced at around $10 and Showcase art-deco foil versions range from $13 to $16.

Ob Nixilis, the Adversary had taken over the Standard meta, having homes in Rakdos Sacrifice and Jund Midrange decks. The three-drop New Capenna planeswalker gained its popularity due to the Casualty mechanic, allowing it to copy itself upon entering the battlefield.

Jund Midrange has become one of the best Standard decks since the release of SNC, running up to four copies of Ob Nixilis, the Adversary. And a simplified version of the Jund Midrange deck via Rakdos Sacrifice has also been performing well.

Ob Nixilis, the Adversary is the most expensive New Capenna card in the entire set, having a foil-etched Showcase version that is worth over $100 and is valued at around $183. The planeswalker’s other versions are worth money too, with a non-etched foil Showcase version priced at $63 and a borderless foil at around $51.

Angel tribal has been revived thanks to Giada, Font of Hope. Rising quickly in the meta as one of the best Standard decks is Orzhov Angels, relying upon Giada, Font of Hope to scale the team in power each time an angel enters the battlefield.

Orzhov isn’t the only angel deck performing well in Standard. Other versions are splashing Blue as a third color while Mono-White versions are gaining steam. Despite Giada’s popularity, her SNC versions aren’t worth a bunch of money. The regular version of Giada, Font of Hope is priced at around $4.25 and the most expensive version is the Showcase foil-etched at around $15.

Slotting into a variety of Esper MTG decks, from Aggro to Control, is Raffine, Scheming Seer. The crime boss of the Obscura New Capenna family is a three-drop 1/4 legendary creature with Flying that can fuel your team via the Connive mechanic.

Aggro Esper versions are rising in popularity, but it’s the Esper Midrange builds that have consistently performed well on the ranked ladder and in small tournaments since the release of SNC.

As Esper Standard decks continue to grow in popularity, so does the value of Raffine, Scheming Seer. A gilded foil-etched Showcase version of the legendary sphinx demon is valued at around $82. But the regular version of Raffine is only worth around $9.

Undervalued by many prior to the release of SNC, Ledger Shredder has become a key card within Izzet Phoneix decks within Standard and Pioneer. The bird is hard to kill and scales in power quickly while making sure you don’t run out of gas.

Providing card advantage while scaling in power via the Connive mechanic, the bird advisor has risen in value faster than Raffine, Scheming Seer. An extended foil version of Ledger Shredder is valued at around $35 and the regular SNC version has jumped in price from around $9 at launch to $13.