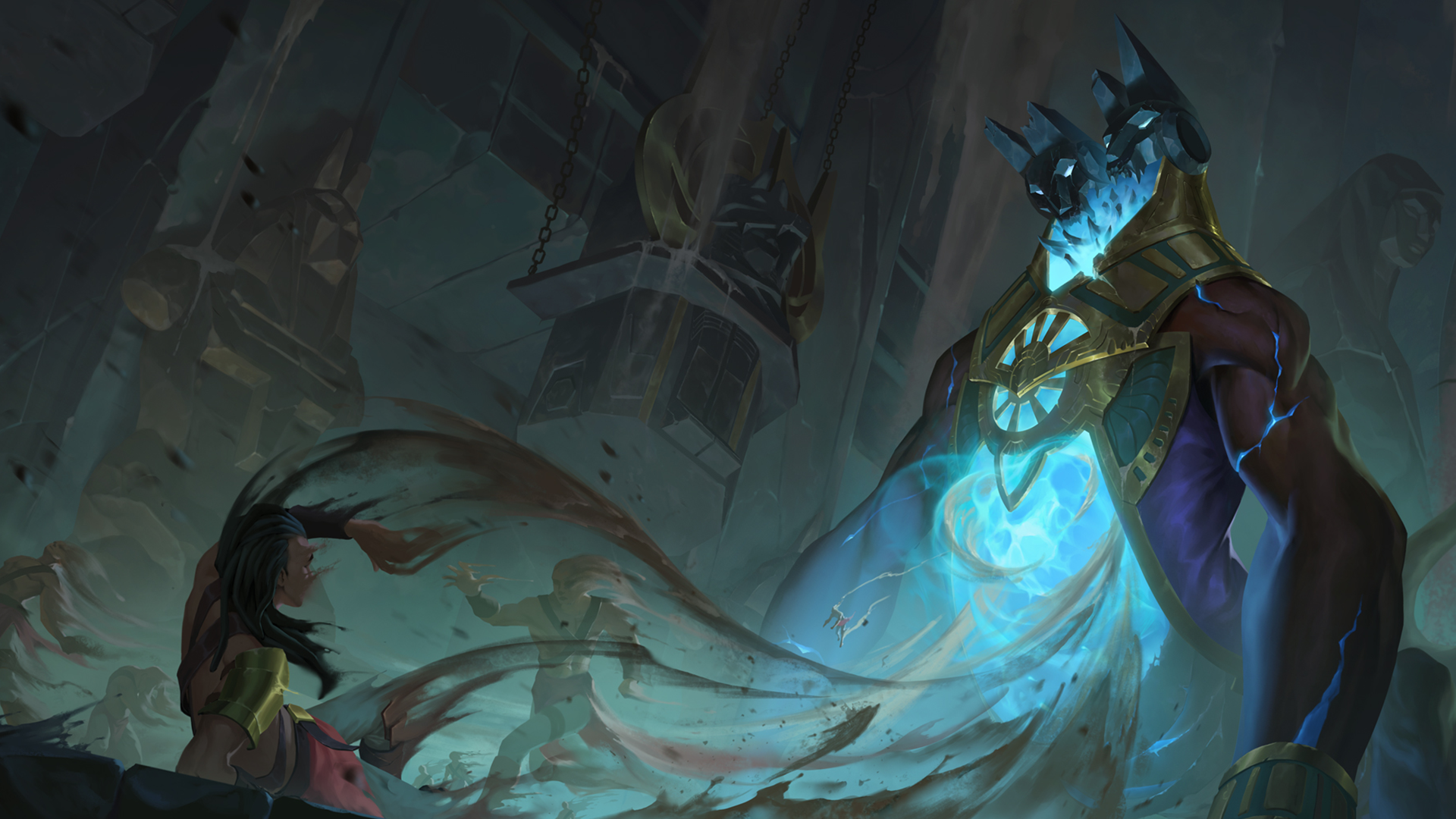 More cards from Legends of Runeterra’s Empires of the Ascended expansion have been revealed today.

The second day of teasers has coined a keyword for an old mechanic, Focus—cards that are Burst speed but can’t be cast during the middle of combat. Some of the cards that already have this mechanic include Gems from Targon or Lulu’s Help Pix, Riven’s Blade Fragments, and Monastery of Hirana’s Sanctuary. 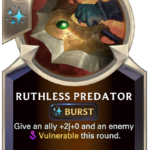 Baccai Sandspinner is a Rare four-mana 5/3 unit with a Play ability that grants an enemy a permanent -1/-0 and Vulnerable debuff. Raz Bloodmane is an Epic seven-mana 6/6 unit with Fearsome and an Attack ability that debuffs enemies with -2/-0 for the round.

Rite of Dominance is a Rare four-mana Fast spell that gives all enemies -2/-0 for the round at the cost of killing either an ally unit or destroying one of your mana gems. Unworthy is an Epic two-mana Slow spell that gives an enemy follower -4/-0 for the round. If you have fewer mana gems than your opponent, the ability kills the follower instead.

All of these card reveals coincide with the introduction of Renekton earlier today. Granting enemies Vulnerable and pulling them is the same as Challenging them, which Renekton desperately needs to succeed.

Relentless Predator allows you to set up favorable trades by buffing up any weak units and getting the chance of pulling any high-value enemies into combat. As Renekton’s champion spell, Ruthless Predator also helps add onto his level up credit to reach his second level faster.

Bloodthirsty Marauder is comparable to Noxus’ Legion Rearguard, but it’s an immensely better version. While its 3/1 statline is frail and leaves him weak to chump blockers and ping spells, his ability to be aggressive early and block an enemy later makes him a potentially formidable threat.

Baccai Sandspinner is similar to Nocturne from the Shadow Isles. While he doesn’t have the ability to level up with the attack debuff affecting only one enemy, his ability is a Play ability as opposed to Nightfall, which makes it easier to activate. In addition, the Sandweaver’s debuff that he applies to a singular enemy lasts forever.

Raz Bloodmane is an alternate version of the Terror of the Tides from the Shadow Isles. For one mana cheaper, a loss of the Sea Monster tag, the inability to spread its Fearsome keyword, and no Deep keyword, Raz gains an extra health point. Raz can be a formidable foe and can end games against any unprepared opponents. If any of the opposing minions have four or less attack, they’ll be unable to block Raz or any other Fearsome units that you may control.

Exhaust highlights a new keyword for a familiar mechanic. At only one mana, Exhaust can set up favorable trades by reducing the attack of an enemy unit while making it Vulnerable so it can be Challenged. This will allow you to remove high value or Elusive threats from the board of the enemy.

Quicksand is similar to Hush in its ability to remove keywords from the opponent for the round and has the added benefit of reducing its attack temporarily by four. The differences between Quicksand and Hush must be considered when evaluating both cards. While Quicksand will allow you to remove potent keywords like Barrier or Elusive in a pinch, it’ll be unable to remove any health buffs. It will also be unable to prevent powerful abilities like Last Breath from activating or champions from leveling up.

Rite of Dominance and Unworthy are both unique cards that interact with your mana gems and natural ramp being delayed. Rite of Dominance can allow you to destroy either your ally or your mana to get a favorable trade in combat. The ability to kill an ally in a pinch has normally been exclusive to the Shadow Isles, but Rite of Dominance opens that up to Shurima now.

Destroying a mana gem can be a good option in the later stages of the game where shaving away your mana isn’t too harmful since you still have lots of mana to work with and you can reach the max again. Destroying your mana gems in the earlier stages of the game will permanently ruin your curve for the remainder of the match, but it can lead to a natural opportunity for Unworthy to be permanently active.

Unworthy is a powerful removal tool if you can augment your mana curve by either destroying it at an opportune time or facing off against opponents using a Ramp-styled deck. While spending two mana to destroy any enemy follower is an efficient and powerful removal tool, Unworthy has a chance to be inconsistent. If you draw this card when both players reach their maximum mana, it only has the option to reduce an enemy follower’s power by four.

All of these cards, and their similarities to options in other regions, pose an interesting concept about Shurima’s identity. If you want to restore the Buried Sun Disc at a consistent rate and have your Ascendants reach level three, your deck must be mono-Shuriman. This means Shurima will need to potentially rely on these adjacent-identity cards to see the Ascended find success.