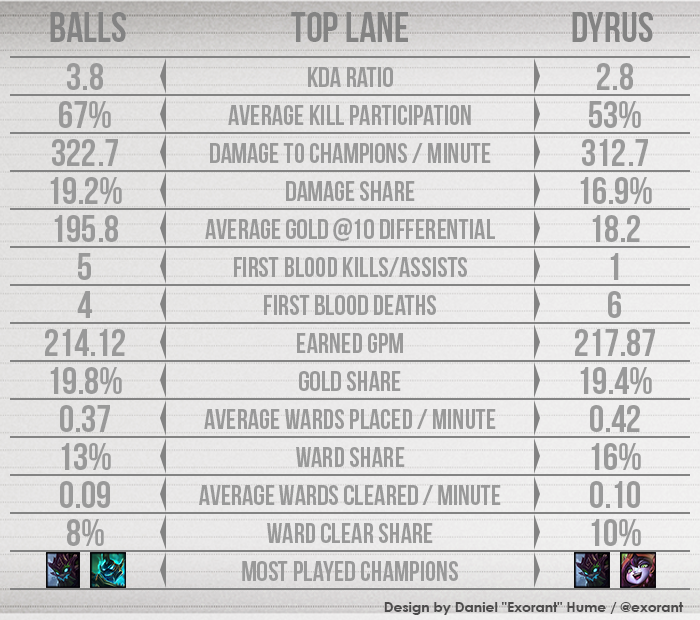 Cloud9 vs. TSM is the dominant rivalry of the NA LCS. The matchup is maybe less storied than TSM’s older, more personal rivalry with CLG, which extends back to the pre-LCS years and is embodied by the colorful history between Reginald and HotshotGG, but while C9/TSM may lack that same level of animosity, it has featured much higher stakes: Cloud9 and TSM have faced off against each other in the last three NA LCS Finals.

Now North America’s two heavyweight franchises are set to meet in a fourth consecutive North American Final, this time with Championship Points and a trip to the Midseason Invitational on the line.

As we prepare for the Spring 2015 NA LCS Finals, let’s look at some statistics from the regular season and playoff games that both teams have played so far. We’ll explore each role matchup to get an idea of where each team’s advantages lie, and also compare some overall team stats.

Bear in mind that these breakdowns include all games from the Spring 2015 regular season, tiebreakers, and playoffs. Any differences with previous previews are due to the inclusion of the tiebreaker and playoff games.

If you’re looking for a few different statistics than what I’ve shared here, or just prefer to get your stats via video rather than text, you can check out this week’s League of Learning segment on PrimeTime League, where Jatt does a similar head-to-head C9 vs. TSM stats comparison. Or if you’re curious about how the third-place matchup looks, or how I previewed the Semifinal matches, read my Team Impulse vs. Team Liquid Head to Head or my head to heads for Semifinal 1 and Semifinal 2.

Both Balls and Dyrus have struggled to put up numbers this split, but Balls takes the edge on combat statistics, with a higher KDA and kill participation. Balls dealt slightly more damage than Dyrus, on average, but since the rest of his team was also doing less damage, his damage share is noticeably higher. Balls’ damage numbers, and those for the rest of his team, also have to be taken in context of Cloud9’s overall lower willingness to engage in fights, so Cloud9’s players have had fewer opportunities to deal damage to enemy champions.

Balls has built decent 10-minute gold leads over opposing Top laners, but Dyrus has barely done better than drawing even. Enemy teams have tended to camp out Dyrus this split, which shows in his six First Blood deaths. Balls has been victimized for First Blood four times himself, but has contributed to five First Blood kills, as well.

Dyrus has contributed slightly more vision control than Balls, but the differences are minor.

Maokai will be a contested pick in the Top lane, since it has been the most played champion for both Balls and Dyrus. In the Semifinals, Balls broke out Hecarim three times and had decent success, showing some new versatility that TSM will have to account for, while C9 can expect more Maokai and Lulu play from Dyrus, judging by TSM’s Semifinal.

Santorin earned the Rookie of the Split award for his strong play, but he has a difficult match-up against Meteos. Both players had strong KDAs, but Santorin skyrocketed his own scoreline in the Semifinal by suffering only two deaths in four games vs. Team Impulse. The two players are nearly identical and kill participation and damage output, but because of Cloud9’s overall lower damage output as a team, Meteos’ damage share is higher.

Neither Meteos nor Santorin has been a First Blood victim this split, but Meteos has contributed to eleven First Blood kills, compared to Santorin’s seven. Bjergsen may deserve some blame for Santorin’s lower FB number, because of the Danish Mid laner’s propensity for grabbing solo First Bloods in lane, something he has done three times this split.

Meteos has pocketed a larger share of his team’s gold, on average.

Meteos has placed more wards than Santorin, but Santorin has contributed more heavily to ward clears.

Earlier in the split, Rek’Sai was heavily favoured by both players, but more recently Santorin has been showing up on Gragas and Nidalee, while Meteos has been playing Gragas and Sejuani.

Hai has had a mediocre split, with high points and low points. His opponent across the Rift, meanwhile, is the likely NA LCS MVP. Bjergsen’s combat, laning, and gold-earning numbers dwarf Hai’s across the board. Look especially at his damage to champions per minute and his gold differential at 10 minutes. Add in the fact that three of his six First Bloods were unassisted, and you can draw your own conclusions.

In vision control, though, Hai has contributed above and beyond other NA LCS Mid laners, placing 59% more wards per minute than Bjergsen and clearing more than twice as many.

Hai is well known as a Zed player, but has put in more games on Corki recently. Bjergsen, meanwhile, leans towards assassin champions, and has also been a big fan of Urgot over the past few weeks.

Both Sneaky and WildTurtle deserve consideration as the strongest ADCs in North America. Sneaky has a better KDA and kill participation, but deals a little less damage per minute than WildTurtle. Note, though, that Sneaky’s damage share is higher. This is because Cloud9 deals less damage overall as a team, due to fighting less often. Sneaky’s damage, in other words, while lower, is arguably more valuable to his team.

Both players have strong gold differentials at 10 minutes, excellent First Blood numbers, and impressive gold earnings. Their vision contributions are quite similar, with Sneaky holding a slight edge.

Corki could be a contested pick, especially considering Hai’s use of the champion recently, but otherwise the champion pools for Sneaky and WildTurtle haven’t overlapped too closely this split. Sneaky hasn’t played Jinx at all this split, and only played Sivir twice, but he has Draven as a pocket pick. WildTurtle only used Lucian twice.

At Support, Lustboy looks like the stronger fighter, with his better KDA and excellent First Blood record, but LemonNation edges the Korean in kill participation. Lustboy places more wards, but both players contribute pretty equally to ward clearing duties.

There shouldn’t be any hotly contested Support champions in this series, unless Lustboy has decided to mimic LemonNation’s preference for Nautilus. LemonNation has put in four games on Janna, so Cloud9 could decide to take away Lustboy’s number one pick (he has played Janna eight times), if they see it as a priority.

The head to head matchup is close, but given TSM’s bloodthirstiness, Lustboy’s combat contributions seem that much more important.

Note: Combined Kills per Minute measures team kills plus opponent kills, divided by game length and averaged across all games played. Average gold differential @ 10 minutes is based on values rounded to the nearest hundred.

In the early game, both teams tend to build large gold leads by 10 minutes, and both do well at securing First Bloods. TSM has the lowest First Dragon Rate in the NA LCS, showing that they place very low priority on that objective early in the game. Instead, they opt to push towers early on, taking the first tower in more than three-quarters of their games. Cloud9’s objective priorities are more balanced, but still lean towards towers.

Cloud9 has bested TSM in two out of three Finals historically, but this has felt like TSM’s split. With TSM’s win at IEM Katowice over strong international competition, they cemented their place as favourites for the North American LCS title.

In lane-by-lane advantages, the matchup between the two teams looks fairly even, with Cloud9 holding three positional advantages. But the nature of those advantages is important. For example, TSM won’t worry themselves too much about a possible Balls advantage over Dyrus: they’ve been sacrificing their Top laner’s personal success all split, opting to funnel their advantages into Bjergsen and WildTurtle instead. Dyrus has proven his ability to help the team even from a personal gold disadvantage, which is one of the reasons he plays so much Lulu and Maokai.

Meanwhile, the Bjergsen advantage over Hai is incredibly important to TSM. Solo Mid will probably look to create as big a gap between Bjergsen and Hai as possible, building a massive snowball for their star player.

The biggest point of strength for Cloud9 may be Meteos. The Jungler will play a key role in driving his team’s early game, propping up a potential disadvantage in Mid, and controlling mid-game team fights. The meta may not favour Meteos’s preferred style of carry jungler anymore, but he showed against Team Liquid that he can make a big contribution on tank junglers like Sejuani and Gragas, too.

A large part of the series could come down to whether Meteos is able to help Hai keep the Mid lane close, or whether TSM is able to secure their Mid lane snowballs. The fairly close matchup between Sneaky and WildTurtle will also be important to watch, as the first advantage earned by either player could prove very valuable.

Thank you to Daniel “Exorant” Hume for putting together the graphics!