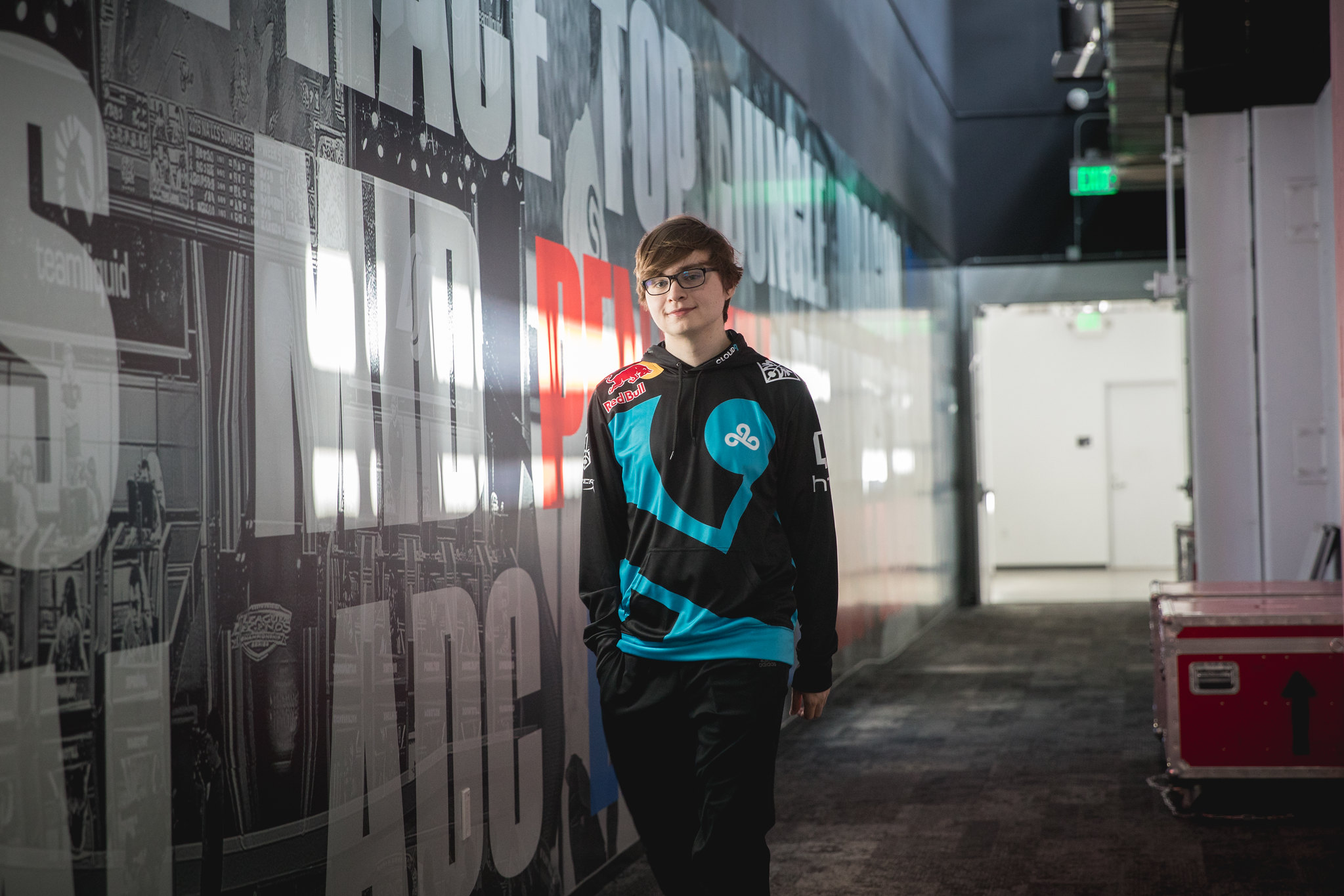 This is despite the fact that it’s been over a month since C9 officially signed Jesper “Zven” Svenningsen, who also plays ADC. This wasn’t a mix-up or a tryout—Sneaky said on stream that he “won’t be playing for C9” in 2020. He made that stream wearing his trademark “Get Jacked” shirt that’s painted in C9’s signature light blue.

But after the divorce, both the team and the player are still figuring out how to move on. Sneaky’s contract still lies with C9 and his smiling face still adorns the team’s League roster page. There hasn’t been a big send-off typical of when a legendary player finally leaves the team he’s always known. There’s no Twitter post on the C9 account featuring an image of Sneaky waving to the crowd, festooned with a big “Thank You Sneaky” header and linked to a highlight video.

For nearly the entirety of their competitive history, Sneaky has been tied to C9, and vice versa. That’s why this separation has been so hard and why it feels like it’s still ongoing. Or, in the words of the Worlds 2017 song, “legends never die.”

“Screaming out your name”

It’s rare in sports to see a player bonded to a team like Sneaky to C9. Since the team qualified for the LCS in 2013, he’s been the franchise player, the one name that fans have always seen on stage. With how short esports careers are and how fickle rosters tend to be, the last seven years of C9 Sneaky have felt like an eternity that few in this industry experience.

Fellow ADCs like Martin “Rekkles” Larsson and Jian “Uzi” Zi-hao are known as franchise players for Fnatic and RNG, respectively, but both have had dalliances on other squads. Yiliang “Doublelift” Peng, the best player in North American history, has bounced from team to team. Even Søren “Bjergsen” Bjerg, who joined TSM in 2014 and now owns equity in his organization, started off in Europe.

Look around the world and there’s only one player in the history of competitive League who’s been tied to a team like Sneaky has to C9. It’s the greatest player of all time, T1 mid laner Lee “Faker” Sang-hyeok. The man who fans call “God.”

Not many people have surpassed Faker in any aspect of the game, but in this regard, Sneaky has God beat. T1 is Faker’s team through and through, but there have always been other forces directing things, like legendary Kim “kkOma” Jeong-gyun pulling the strings behind each of the team’s three Worlds victories.

Cloud9 has influential figures too, like founder Jack Etienne and coach Bok “Reapered” Han-gyu, who’s assumed total control over the League team with his continual roster updates and strategic genius. Reapered likely made the decision to dump Sneaky in another bid to remake the team in his own image.

But over the past seven years, C9 has grown to embody Sneaky’s style and character in ways that even Faker can’t claim. What is C9 most well known most? Irreverence, memes, unpredictability, and even success are hallmarks of Sneaky’s personality. The color scheme and cloud logo seem to be a perfect fit for Sneaky’s laid-back demeanor.

This team and player were made for each other, and that’s why the separation is so hard.

Of course, Sneaky wouldn’t have lasted this long with the team if he didn’t have some measure of competitive success. But nothing’s ever easy with him—his results are shrouded in a cloud of mystery, only clear to those who approach his playing career with nuance and understanding.

After being promoted to the LCS for the 2013 Summer Split, C9 has contested 13 LCS seasons. A franchise player would’ve been expected to earn several of those titles. Sneaky got his early on: In his first split, he and C9 reeled off an impressive 25-3 match record and swept TSM in the playoff finals. Their match record was one game worse the following split, but the finals result was the same. C9 were a juggernaut on their way to becoming a dynasty.

Then Bjergsen happened. After a split acclimating to his team, Bjergsen led TSM to a 3-2 decision over C9 in the 2014 summer final. It’s been silent for Sneaky and C9 on the championship front ever since. Bjergsen and Doublelift have made the LCS their personal playground while C9 fans have agonized over repeated playoff failures, sometimes in the most excruciating of manners.

Over the past few years, C9 has become the team that just can’t win a title, which makes a quantitative assessment of Sneaky’s career difficult. And it’s complicated by the fact that, on the international stage, in front of the brightest lights and loudest fans, Sneaky is an absolute tornado.

“They become a part of you”

C9’s successes at Worlds are astonishing—they’re perennially the last NA team standing at the game’s biggest championship. But even more eye-popping are Sneaky’s numbers. If C9 morphs into a dangerous weather system on international soil, Sneaky is the eye of the storm. His memes, including the infamous “Sneaky in lane” one, keep his teammates loose, his self-deprecating manner puts chips on their shoulders, and his performances deliver on the Rift. In 2017—the same year Against the Current sang “Legends Never Die“—he set the all-time record in damage. The narrative couldn’t have written itself more perfectly for the moment.

It’s not just moments. Since 2014, he’s been top-five in the tournament in damage-per-minute twice, matched only by Kang “TheShy” Seung-lok, Hu “iBoy” Xian-Zhao, Huang “Maple” Yi-tang, Gu “imp” Seung-bin, and Kim “Deft” Hyuk-kyu. Uzi surpasses them all with three appearances. That list reads like one of the best players in the history of the game. By the numbers, Sneaky belongs, but it feels like he’s never really gotten his due as a part of that club.

That list is also glaring for the names missing, namely Doublelift and Bjergsen. Those two carry heavy burdens as players who just can’t summon their best at Worlds. And yet, both have seemed to outlast Sneaky. Weeks after the revelation that C9 moved on from its star, we still don’t know where Sneaky will play in 2020—there’s speculation whether he’ll play again at all.

But no matter where C9 and Sneaky go from here, fans should always remember them together. Sneaky made C9, gave them the attitude necessary to overcome a whole region’s demons at Worlds. In return, C9 gave him incredible moments on the game’s biggest stage, moments that should never be forgotten. Sneaky is C9 and C9 is Sneaky.

Maybe the 2017 Worlds song was right, but with a slight alteration: “Memelords never die. They become a part of you.”