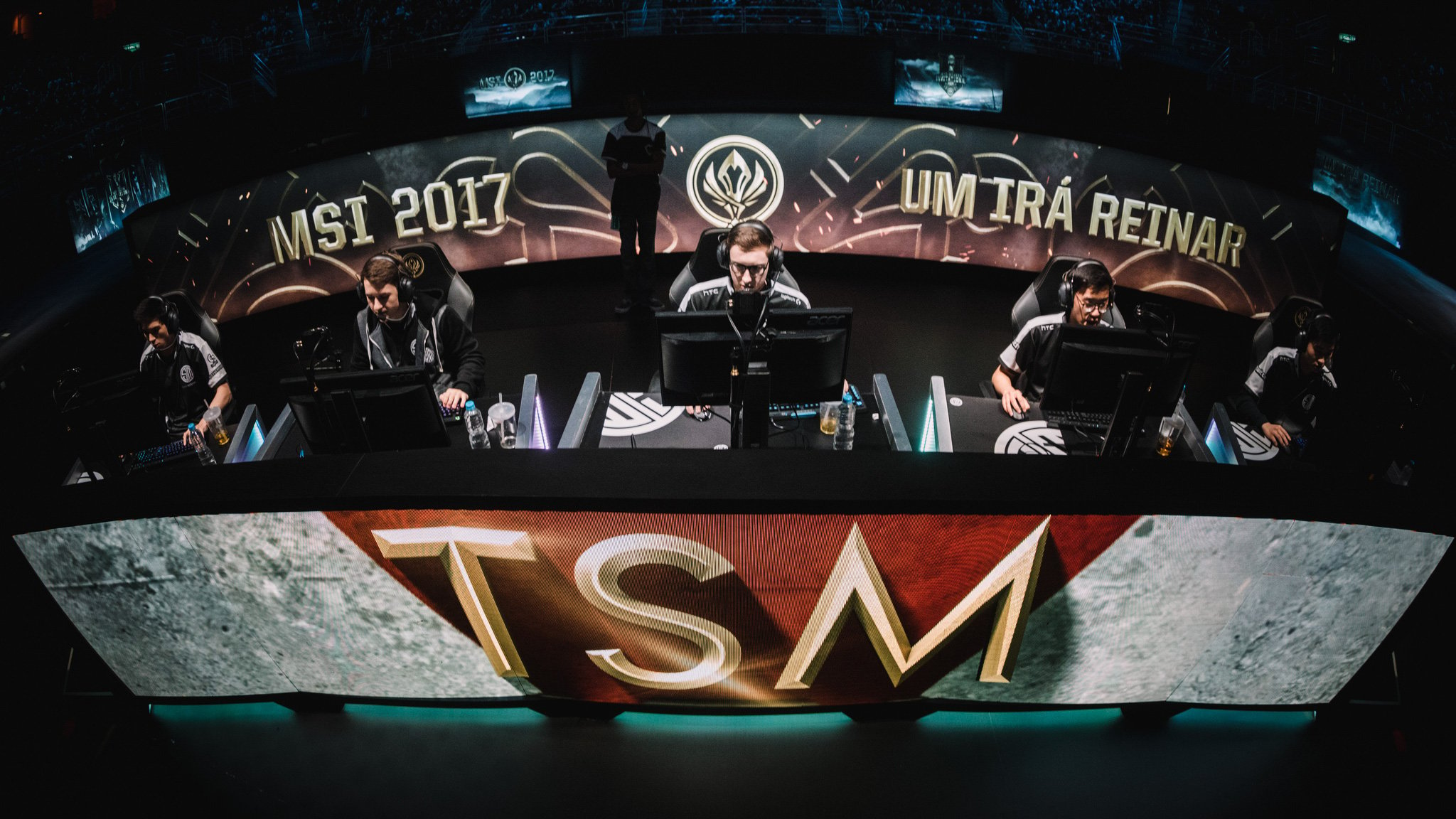 For many around the world, the dawn of a new year marks a new beginning, a chance to forget past failures and aim higher. For TSM, the night of disappointment has been a long one.

The team hasn’t made it out of the group stage at the League of Legends World Championship since 2014. Multiple roster iterations have resulted in only one thing: failure. Now, TSM has rebooted the team yet again in preparation for 2018, a year it hopes will go down in history as one of glorious rebirth.

Perhaps fittingly, the organization has turned to two foreign-born players to solve their international woes. With the new bot lane of ADC Jesper “Zven” Svenningsen and Alfonso “Mithy” Rodriguez, along with new jungler Mike Yeung, and a new coach in SSONG, TSM has set the bar even higher. It seems that each year, the stakes get higher for this team, the odds ever more daunting.

How will the team fix its issues and launch its next great chapter?

It all starts in the top lane

The two carryovers from last year’s squad are solo laners Kevin “Hauntzer” Yarnell and Søren “Bjergsen” Bjerg. Both are among the best in their positions in the region, and both are also highly valued as domestic residents who don’t count towards the import cap.

Despite some criticisms of his seemingly passive play at Worlds, Bjergsen remains firmly at the top of the NA LCS pantheon. He is the greatest player the region has ever known, and few seriously blame TSM’s disappointments on the Danish mid laner.

Besides, Hauntzer has been worse. The team has given him carte blanche at Worlds, giving him lane priority and asking him to carry. But his aggressive picks have just invited opposing junglers to gank him while he’s overextended. A lot of TSM’s misadventures in international play have to do with Hauntzer’s lane.

All about the blue buff

TSM, at their best, don’t like to focus top side at all. But there’s one situation where they feel like they have no choice. TSM love to give Hauntzer lane priority in the early 1v1 when playing on red side, a side that’s been an issue for them for years. With Hauntzer pushing, previous jungler Dennis “Svenskeren” Johnsen would be given freedom to invade the enemy blue buff, one of the team’s most basic strategies.

The problem was that, outside of his region, Hauntzer couldn’t reliably provide pressure, and Svenskeren’s risky invades would often get him killed. Even worse, top lane and jungle looked cut off from the rest of the map, as both players failed to play around what the other lanes needed, especially the bot side. Either TSM would fail to cover their duo lane when they needed help, or fail to pressure the other side of the map when the duo lane was lost.

Even the best teams look a bit lost when their preferred strategy doesn’t work out. But TSM’s lack of a viable alternative meant that games felt over before they really began. In domestic play, TSM would still often come back from early stumbles as their opponents failed to make aggressive objective calls. But better teams at Worlds did punish TSM, forcing them to collapse.

TSM’s rigid playstyle and over-reliance on lane dominance and blue control contrast with other NA teams that have had better results internationally. Cloud9 have gotten out of the group stage at the past two World Championships because they have learned how to adapt after the first week. C9 also know how to craft a winning game plan when one—or more—lanes are losing, something TSM still struggle with, even in their region.

Better teams, like SK Telecom T1, can even survive bad openings by using brute force to pry games open. SKT’s 2017 top laner, Heo “Huni” Seung-hoon, faced numerous issues adapting his carry-oriented style to the team. But when things went south and both side lanes fell behind, SKT could still manage to win by patiently farming and then collapsing as a devastating five-man unit around key objectives. In their quarterfinals series against EU LCS squad Misfits, SKT had their opponents so scared of full-on teamfights that Misfits passed up critical Baron opportunities, even in man-advantage situations.

Is a new jungler enough?

Those familiar with TSM’s history will see a lot of Svenskeren in new jungler Mike Yeung. In their formative years, both have been big fans of Nidalee and her ability to clear fast, invade early, and gank hard. This almost feels like TSM is replacing Svenskeren with a younger version of himself.

It also makes it unlikely that Mike Yeung will be a major catalyst of change in 2018. More likely, TSM just needed to replace Svenskeren with the closest facsimile that was also a domestic player. That’s because the real shift will be the brand new imported bot lane.

When TSM signed Mithy weeks ago, owner Andy “Reginald” Dinh spoke to Travis Gafford praising the support player’s communication and shot calling acumen. Those were the primary reasons for the team’s offseason signings, as Svenskeren and Vincent “Biofrost” Wang were not known to be strong communicators at the jungle and support positions.

The strange thing is that, Zven and Mithy’s last team, G2, was also heavily criticized for poor performances at international events compared to their dominance in the region. While the G2 bot lane have deservedly avoided a lot of the blame for those miscues, it remains to be seen whether they can turn it around on a team with even higher expectations.

Mithy is an upgrade in terms of his ability to make plays from the support position. Biofrost is a more careful player, someone who loves to heal, shield, and peel for his teammates. He’s not as good at forcing plays. Keeping ADC Yiliang “Doublelift” Peng alive was a key part to his support role, but Biofrost’s focus on that duty also seemed to cap his ceiling as a player.

Mithy is a much more vocal shot caller than Biofrost, and he is more active roaming with the jungler to set up plays. Biofrost’s relative passivity was a big reason why Hauntzer, Bjergsen, and Doublelift served as the team’s shot callers. But having the support call plays isn’t going to solve any issues on its own. What will really make a difference is Mithy’s ability to make better calls than TSM’s carries would have on their own.

Ostensibly, getting an upgrade at support may mean TSM will prioritize the bot lane more. The odd thing is, especially on blue side, TSM’s bot lane already did play with priority. TSM loved using bot lane pressure to take control of the river, and later, the enemy jungle. How then will Mithy be different?

Looking at the way G2 played, even with their poor international record, sheds light into what Reginald sees in Mithy. Unlike TSM, G2’s success hinged less on their individual talents—outside of Zven, none of G2 were considered mechanical marvels—and more on the team’s ability to adapt and learn. They were a team built on solid shotcalling fundamentals.

Ironically, G2’s fundamentals can be seen even in their losses, such as against Samsung Galaxy in the Worlds 2017 group stage, Mithy used successful roams to contest vision and G2 as a whole basically met the eventual champions at every objective. They even seized brief kill leads when finding Samsung members caught out.

The difference was, Samsung players were never caught in positions that would threaten objectives. They won the tournament by not making mistakes and playing a patient game, waiting for their opponents to slip. G2 knew exactly what Samsung wanted to do and yet were powerless to stop it—their laning and teamfighting execution just wasn’t good enough.

It’s little consolation to G2 fans that the team knew what Samsung wanted to do and still lost. But Mithy’s ability to see into the future could be a sign of future growth for TSM.

A problem of structure

Mithy should be buoyed in his quest to help TSM with better fundamentals by the addition of Kim “SSONG” Sang-soo as TSM’s coach. SSONG will be the best-pedigreed coach TSM have ever had. If anything, this should propel the team into a new era of process-oriented thinking. Key wording being: should.

TSM should have known after last year’s Worlds that developing Biofrost was a priority. We even wrote as much. In the same piece, we urged TSM to focus less on winning scrimmages and more on developing winning habits.

From all signs, that didn’t happen in 2017, and it doomed the team. Rather than growing with Biofrost, the team left him behind. They did make a greater effort to learn new metas and expand their champion pools. But when the going got tough at Worlds, it was back to comfort picks and tough-to-play matchups.

Their failure wasn’t the fault of any one player as it was one of the entire team.

This year in the LCS, everything will change, and not just because of franchising. For the first time, each team will have an academy squad. Everyone will have a sub at the ready. It’s a tremendous opportunity for reinvention for every organization.

TSM need to take these changes in stride and keep up with the shifting landscape. They need to change everything—the way they practice, prepare, scout, and win. SSONG needs to assert himself from day one and make it clear that the players—the holdovers in particular—cannot keep doing the same things in practice and scrims. They need to drill for specific situations and objectives and not just try to blow people out in the lane phase. They need their academy squad to press their starters in real game situations. And if they need to sacrifice the three straight LCS titles they’ve won to accomplish that change, so be it.

When pundits talk about the gap between international teams, those in the West in particular, and the best South Korean squads, it’s never really about the talent of the players. It’s about everything else. The infrastructure, coaching, and hell, the basic way teams approach the game. Samsung Galaxy didn’t win the title because they have the five best players. They won because they had the best team.

TSM may actually have some of the best players in the world on their roster. They just need to start playing like it.