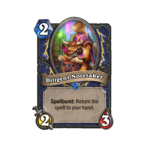 Hearthstone’s Scholomance Academy expansion is releasing next week, adding another 135 cards to the game’s collection.

A lot of these cards bring long-awaited or entirely new mechanics, like dual-class cards and Spellburst. While a sizable chunk of the expansion was devoted to dual-class cards (40), this list looks to take note of every powerful non-dual-class card.

Related: The 10 best Hearthstone Scholomance Academy dual-class cards that can change the meta

Here are our picks for 10 of the best non-dual-class cards that were added to Hearthstone’s Scholomance Academy expansion.

The first card on this list to make use of the new Spellburst mechanic, Diligent Notetaker gives a fairly standard introduction to the mechanic and provides the perfect usage to help players understand it. You can always play the Notetaker on a turn where you want to play a spell to guarantee the chance to gain Spellburst value. But the strength of Spellburst is that it can be played on turns independent of spell casting. As a two-mana 2/3, Diligent Notetaker is basically a River Crocolisk in stats and has a good chance of surviving for another turn if played on turn two. If he manages to live for a future turn, the amount of potential he can provide to run away with the game is immense.

With the new Lightning Bloom, you can have an absurd turn three, spending upward of seven mana to play your cards. If your opponent is playing an aggressive deck, you can gain extra copies of removal spells, like Serpentshrine Portal, Lightning Storm, or the new Molten Blast.

In an expansion where combo cards and archetypes are being heavily pushed, Mindrender Illucia is a powerful example of a tech card to answer them. Her wacky-looking effect is difficult to evaluate at first, but she has a ton of disruption potential outside of destroying combo decks in the later stages of a game.

If she’s played early enough, she can also slow down aggressive lists for a turn. You can always give your opponent a heavy hand of high-mana cards and just take your opponent’s hand for a single turn so they can’t play their own cards, giving you one turn of breathing room and the chance to waste any coins they might be keeping. Mindrender Illucia singlehandedly gives Priest the tools to stave off and fight back against combo-centric decks.

In Wild alone, Illucia can be played the turn after Mage completes their quest and steal their Time Warp to deny the OTK. Combo decks will have to always be conscious of playing around this card when facing off against Priest since it’ll no longer be a free matchup.

In the early days of Hearthstone when the Standard format was conceived, Druid had a versatile spell in the form of Raven Idol. While the card let you Discover a minion or a spell, it was mainly used to Discover spells for more chances at Innervate and Wild Growth, both before they were nerfed. While the game has changed immensely since then, Nature Studies is a stronger return to a toolbox card like the Raven Idol.

Compared to the other five Study cards in Scholomance Academy, Nature Studies doesn’t Discover from neutral cards, strictly only class cards. This allows you to be more direct in what you’re trying to find. If you play Nature Studies early, you can look for more mana ramp. If you’re facing a daunting board, you can search for removal. When you’re a little damage short for lethal, you can fish for more damage options.

The additional discount lets you also plan future turns accordingly. If you play it on turn one and find Wild Growth, you can play it the following turn as if it never got nerfed. If you find Nature Studies later, you can combine it for a miracle turn with Exotic Mountseller for more Beast summons.

Overall, Nature Studies is a strong versatile tool for an already flexible class.

While some of the Soul Fragment cards that were given to Demon Hunter push for a more controlling style, there are still some gems that help the aggro and midrange variants of the class. Soulshard Lapidary fits that bill. As a five-mana 5/5, she has fair stats, but the ability to give your Hero five Attack to push toward the enemy face or clear an opposing minion gives you a lot of power to both create a board while controlling it.

Soulshard Lapidary’s success is solely dependent on how good the other Soul Fragment enabling cards are. But with tools like Marrowslicer, Spirit Jailer, and even Soul Shear, Soulshard Lapidary looks like she’s in safe hands to find future success.

Warrior was a top class in the Ashes of Outland meta. While the best lists were usually midrange oriented, there were still spot appearances from controlling lists. Troublemaker looks to take a spot within those lists as a topper of a curve or as another high-value threat to throw at your opponent. Troublemaker is like another version of Priestess of Fury, a card with a powerful end-of-turn trigger that can easily finish the game if it survives for a turn.

If the amount of high-value minions reaches a critical mass in the future, a Recruit-style Dimensional Ripper/Commencement Warrior could appear for controlling lists of Warrior. In a future deck like that, Troublemaker would always be willing to make an appearance.

While the main appeal of Druid this set has a lot of spell and combo lists, Twilight Runner is a hidden gem that forces Druid to look at its potential. Stealth has always been a powerful mechanic, yet only a few cards using the keyword have been able to find success in the game’s history. Recent Stealth minions have been pushed with more powerful effects besides them, like Skyvateer, Escaped Manasaber, and Akama. Twilight Runner is an intermediary threat that provides a ton of value due to the nature of its ability to draw Druid two cards every time it attacks. Even on turn five with four Health, due to its Stealth, it’s nearly guaranteed to live for a turn to accrue card draw value by attacking.

When combined with the dual-class Druid Hunter card, Guardian Animals, Twilight Runner can help create massive boards while controlling opposing boards and gaining a ton of value with the card draw that comes with it. While the current Druid decks that will appear in the Scholomance Academy meta may not solely focus on Midrange Beast Druid, the Twilight Runner and Guardian Animals package will be a strong shell that Druid players can consider running.

A callback to the famed and powerful Mage card, Flamewaker, Firebrand aims to bring a new version of Tempo Mage back into Standard. While his effect isn’t as powerful as the Flamewaker of old and can’t activate multiple times, it still provides a consistent version of Flamewaker’s effect with the threat of a stronger body.

Oftentimes, you’ll be playing Firebrand as a three-mana 3/4 body on turn three. If your opponent tries to develop a weak board without clearing Firebrand, you can activate any spell and usually just clear the enemy board while continuing to develop your own.

Starting with the Year of the Phoenix, Rogue has been slowly solidifying a Stealth identity and archetype for the class. Infiltrator Lillian will be another corner piece Legendary that helps cement that push toward Stealthy Rogue builds. Stealth is already a tough mechanic for most classes with poor AoE options to deal with. When you throw in an extra aggressive body to the Stealth minion, it becomes difficult for even control decks to fight against.

If the opponent clears Lillian while their board is empty, the undead version of Lillian will be able to deal four damage for free while summoning another 4/2 body for the enemy to deal with. The amount of damage that Lillian can provide for Rogue on her own shouldn’t be underestimated.

While Lillian looks like she wants to go into Stealth builds, she’s also good on her own and will definitely make her way into lists outside of Stealth Rogue.

When this card was first announced, the community rushed to think of all of the possible combos that Druid could run with it. The one that garnered the most attention was Omu into Germination into Malygos into a cheap spell to activate the new Omu for a 10-mana turn into Malygos. Even though all of those combos sound powerful, and even with the potentially scary Mindrender Illucia roaming around, Omu can go beyond all of that.

One of the strengths of Spellburst previously mentioned is that Spellburst cards can be played before the turn you activate spells and go off with them. While Forest Warden Omu is unable to benefit from that aspect, and Omu gains more value the longer the game goes on, you’re still able to play it before the “Dream Germination Turn.” If you’re playing for tempo, Omu can provide swing turns and serve as a “free” 5/4 that can be a quick way to catch up on the board if you’re looking to be proactive.

Omu is just another piece of the Combo Druid Puzzle that Blizzard keeps adding as the Year of the Phoenix progresses for Druid.

Last year, while the Boomsday Project expansion was in Standard, Myra’s Unstable Element was a powerful card that found its way into multiple tempo and aggressive Rogue lists. Even with its nature of being a sole copy in a deck due to its Legendary status, the last resort factor that it brought was powerful enough for it to give Rogue extra finishing power when they ran out of steam. With two copies, odds are Rogue players can find a nearly similar effect when they add Secret Passage to their lists.

The alternate ways in which you can use Secret Passage add to its strength. If your hand is good but you want to save it for a future turn, you can mulligan for five new cards to play while keeping your original hand. If you’re playing for tempo and are running low on cards, Secret Passage gives your aggression a new lease on life with five new cards.

While Secret Passage won’t synergize the best with draw spells after activation, the raw amount of draw potential that it can initially provide more than makes up for it. Controlling lists will always have to fear playing around Secret Passage when facing off against aggro or tempo Rogue, even if their hands seem empty.

In combination with the Voracious Reader, aggro has some powerful tools to play with when Scholomance Academy drops to keep consistently cycling and never relenting with their threats.

Hearthstone’s Scholomance Academy expansion will be released on Aug. 6. You can pre-purchase the expansion before it goes live in one of two different bundles from Blizzard’s online store or in the Hearthstone client.