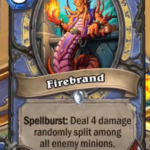 Wyrm Weaver is a threatening minion that can aim to finish off an opponent if you summon a bunch of Mana Wyrms and they go unchecked. Firebrand is a callback to a previously-powerful Mage minion, Flamewaker. The main difference between Firebrand and Flamewaker is that Firebrand’s effect activates only once and is guaranteed to hit minions. Sorcerous Substitute is a neutral minion that hopes to push the Spell Damage archetype by providing 12/12 in stats for only six mana if you can control a minion with Spell Damage by turn six.