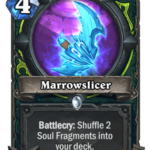 Marrowslice is a powerful activator on a weapon stat line that’s proven to be strong in the past on cards like Death’s Bite and Truesilver Champion. This can easily slot into either aggressive, controlling, or mid-range lists due to its raw power and activated ability. Shardshatter Mystic serves as a control-based activator for Soul Fragments by providing a powerful AoE board clear that’s comparable to Duskbreaker and Crazed Netherwing. Soulshard Lapidary is a powerful minion that pushes a more aggressive nature of Soul Fragments by granting your hero five damage that can be used to either clear a big minion or hit the opponent’s face. 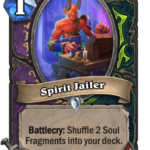