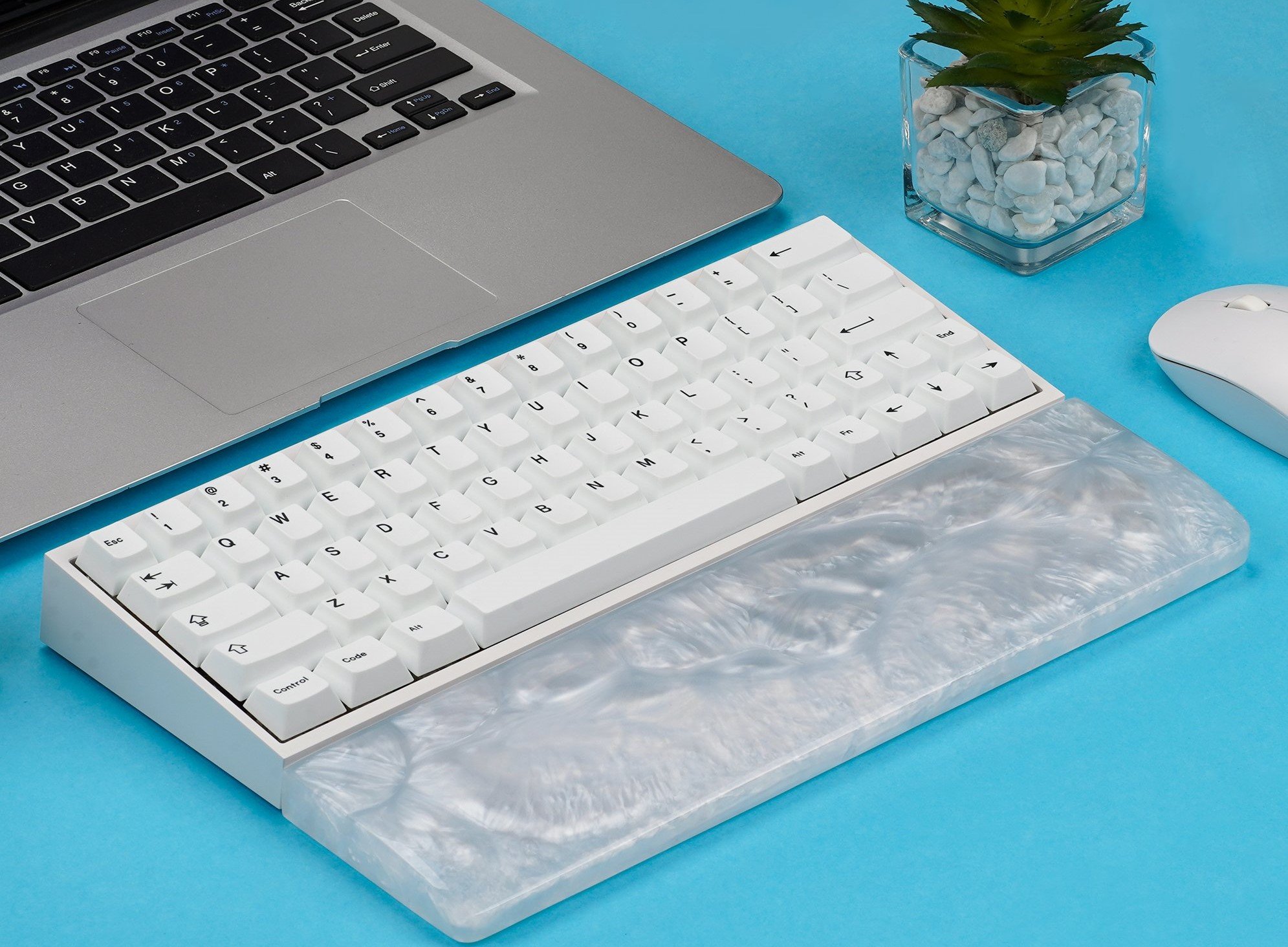 Many keyboards, like the Corsair K95 and Razer Huntsman V2, come with built-in wrist rests, and it’s also possible to buy standalone wrist rests, like the HyperX Wrist Rest and Aidata CGL006B. Users are spoiled for choice when it comes to wrist rests, and there are many options to choose from in different sizes and materials. Many wrist rests come in materials like plastic, resin, memory foam, gel, and even wood. Not all these wrist rests have the same benefits, and some provide more support than others.

This article dives into the world of keyboard wrist rests to see which material is the best for you.

Memory foam is a soft material made from polyurethane. It’s known for being soft yet durable and is used for supportive products, such as mattresses, sofas, and car seats.

There are different types of memory foam, including the traditional and gel-infused types. Traditional memory foam retains heat from the user’s body and molds to its shape. Memory foam wrist rests provide ample cushioning and sometimes conform to the shape of the user’s wrists.

Memory foam wrist rests are common among high-end gaming keyboards because of their comfort and support. The soft memory foam absorbs the pressure of the hands to provide more comfort. Its softer feel is also generally preferable to the hard surface of a desk.

Companies like Glorious sell wood wrist rests as an alternative to memory foam and gel options. Wooden wrist rests are harder than memory foam alternatives and don’t have a soft-touch feel to them. They provide firmer support and often have a smoother surface with less friction. Unlike memory foam wrist rests, wooden alternatives don’t get worn out as easily and are resistant to sweat and odors. They are also easy to clean, only requiring a wipe down with a damp cloth.

Wood wrist rests have a couple of major disadvantages. Many users don’t like the hard feel of wooden wrist rests and find them to be uncomfortable. This type of wrist rest can also be more expensive than memory foam alternatives, depending on the make and model.

Most wood wrist rests are aftermarket products. It’s not common at all for keyboards to come from the factory with a wooden wrist rest, and users have to purchase them separately.

Wrist rests like the 3M WR305LE and Kensington 62398 have a soft gel interior with either a plastic or leatherette exterior. Gel wrist rests are soft and offer ample support, making them very comfortable. Instead of molding to the hand’s shape like memory foam, they have a bouncier feel and return to their usual shape as soon as the user lifts their arm.

Similar to all the other wrist rest types, gel products have some drawbacks. Some users don’t like the feel of plastic-coated versions because it isn’t soft like fabric. Another concern is durability. If gel wrist rests get punctured, they can potentially leak and damage other peripherals or components, although this is unlikely.

Some gaming keyboards like the SteelSeries Apex 7 and office keyboards, like the Logitech K350, have plastic wrist rests. Plastic wrist rests are hard, like the wood options, and don’t feature a soft touch. They are often flatter than gel and memory foam options and offer minimal support compared to the other types.

Resin wrist rests often come in a range of stunning colors to brighten up a setup. This type of wrist rest is made from clear epoxy that can contain wood or other materials. The exterior is often transparent, with a glossy feel. While there are plenty of resin wrist rests available for purchase, there are also many molds available online to help users to make their own.

This type of wrist rest has a lot in common with wood alternatives. Both types aren’t often sold together with keyboards and are aftermarket upgrades. Resin wrist rests also have a hard feel like wood with low friction. The hard surface provides good support but isn’t as comfortable as gel or memory foam.

When it comes to choosing the best material for a wrist rest, the two most beneficial options are memory foam and gel. These types of wrist rests are supportive and have a softer touch that’s comfortable for hours of use. Some users may prefer looks to comfort and opt for the elegance of a wood or resin wrist rest, while budget-conscious buyers may sick with a plastic alternative because it provides basic support at a low price. Users looking for a colorful wrist rest to stand out can consider resin options as long as they don’t mind its harder surface.

There’s no right or wrong answer when choosing a wrist rest, and the decision comes down to personal preference and budget.