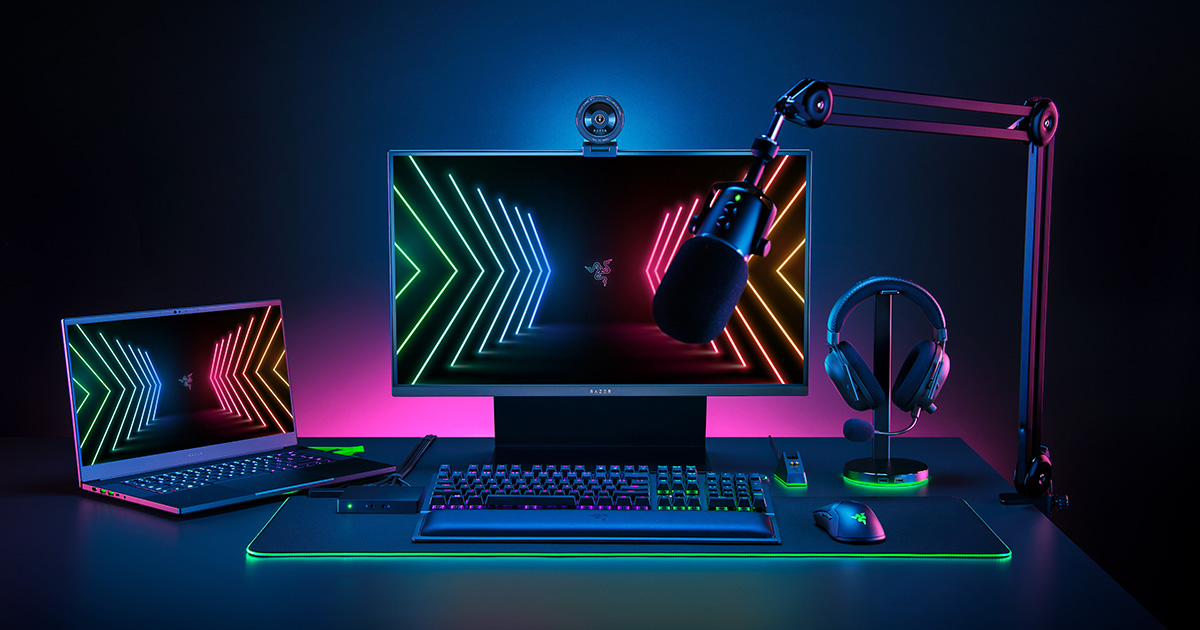 PC gamers have more options than ever when it comes to computers. Prebuilt gaming desktops range from budget options to high-end custom or semi-custom versions. Users can also build their own gaming PC with parts of their choice and upgrade whenever they like. While desktops remain popular, many users are now choosing gaming laptops to play their games.

Gaming desktops traditionally have better performance than gaming laptops because they can house more powerful graphics cards and a wider variety of hardware. Laptops also have limited space for airflow and cooling features. The gap between the two options has closed in recent years, and the introduction of the Razer Blade in 2011 was a game-changer for laptops. Modern technology allows companies to cram more powerful hardware into the smaller space of a laptop, and there are newer technologies to improve thermal performance.

This article looks into the pros and cons of gaming laptops vs. gaming desktops to compare their performance, durability, price, and other factors to help you decide which type of computer is best for you.

There’s no doubt that desktops have been the go-to option for gamers since the beginning. Gaming desktops are cheaper than laptops when comparing similar specs. Desktops also offer convenient upgradability and wider compatibility.

Gaming desktops can be cheaper than their equivalent laptop rivals, but it depends on the peripherals and components attached to them. Adding the latest top-of-the-range GPU or a high refresh rate monitor can easily push the price higher than a gaming laptop. Peripherals, like gaming mice, headsets, and keyboards, can also drastically increase the cost of a desktop.

While desktops aren’t necessarily always cheaper than laptops, they have a better price-to-performance ratio. A powerful gaming rig might cost more than an expensive gaming laptop, but it will have better performance and a larger monitor.

When factoring long-term costs between the two options, desktops come out on top. Laptops have limited upgrade options and become obsolete faster than desktops. Users then have to replace the whole laptop with a newer model with the latest specs.

Desktops have a longer lifespan because they are upgradeable. Instead of replacing the whole unit, users can upgrade parts gradually as new technology is released. If parts go faulty, desktop users can also replace the component and continue using the system. Laptop owners have limited repair options and often have to dispose of the unit if it breaks.

Being able to swap out faulty components or gradually upgrade instead of buying a new system is a big bonus for desktops when looking at the long-term cost factor.

Another reason for the popularity of desktops is their upgradeability. While there can be some limitations as the hardware ages, most desktops allow users to upgrade components like RAM, CPUs, GPUs, and storage drives. This factor is important because modern game files are always getting bigger and require more resources for their high-resolution graphics. Instead of replacing the whole computer, users can just replace the components needed to run the games.

Upgradeability is directly tied to repairability. If any component breaks on a desktop PC, users can typically find a replacement from multiple vendors. The ability to replace parts on a desktop PC extends its overall lifespan and saves users money.

Desktop gaming PCs offer far more customization options than laptops. Some companies, like iBuyPower, allow users to choose every component and build a desktop to their exact specifications. Users get to choose everything from the case to the GPU and cooling system, and it’s built for them.

Pre-built gaming desktops from manufacturers, like Asus and Alienware, offer limited customization options. Users get to choose performance components, like GPUs, RAM, and processors, but they can’t select the case and cooling options.

Many gamers prefer to build their own one-of-a-kind desktop to save money. The modular design allows builders to choose all components ranging from the AIO cooler to the case and everything in between. Once all of the parts arrive, builders are tasked with putting the PC together themselves.

When building or buying a desktop PC, players can choose the best screen size to suit their needs. Competitive gamers can run 24-inch 1080p monitors, while other players can use 4K, widescreen, or other options. Standalone monitors are also easy to replace if they break or if users want to upgrade without replacing the whole system.

Desktop PCs offer better airflow and cooling compared to laptops. Since desktops have more interior space, it’s easier for the air to circulate through them. The extra space gives users more cooling options, and they can decide how many cooling fans they want or whether they’d prefer a more efficient all-in-one (AIO) water cooler.

Having more space also affects performance. Gaming desktops often have better performance than their laptop equivalents because they house full-size components instead of scaled-down versions. Having better cooling and airflow also helps improve the performance of desktops because each part works in optimized conditions.

One of the best examples to illustrate the above point is with graphics cards. Nvidia’s RTX 3090 is its top-of-the-range graphics card, but it’s only made for desktops with no laptop version currently available. While Nvidia makes both types of cards for the RTX 3080, the desktop version is around 40 percent more powerful than the mobile one.

Gaming desktops are bulky and hard to move around. The case tends to be heavy depending on how many components it houses, and monitors become difficult to carry as their sizes increase.

While this is generally the case, there are some exceptions to the rule. Some users favor compact mini-ITX or micro-ATX builds with smaller cases. If these builds are paired with a small monitor, they can be easier to transport than mid-tower ATX siblings.

While most components are easy to find, others, like GPUs, can be difficult to find due to limited availability. One of the most obvious examples is Nvidia’s 30 series GPUs. A year after release, these GPUs are still scarce, which means buyers have to look at alternative options.

The scarcity of GPUs has a direct effect on pricing. Nvidia’s RTX 3070 graphics card was released at the same $699 price as the older RTX 2080 despite being newer and having better performance. While both cards have the same recommended price, the RTX 3070 goes for around $1,500 due to its low supply and high demand.

Gaming laptops offer unparalleled portability and simplicity. Everything from the monitor to the webcam and keyboard is integrated into a gaming laptop, so users don’t have to worry about buying them separately. Gaming laptops can run the latest games and are the only options for people who often travel due to their compact design.

Without question, the biggest advantage of gaming laptops is their portability. Users can easily fit a laptop and peripherals, like the mouse and headset, into a travel case and carry them on planes or trains.

Gaming laptops have integrated sound, webcams, monitors, and other devices, which make them easy to set up and use. Buyers get everything they need in a single device and don’t have to worry about finding compatible peripherals to get the system running. That said, most gamers still buy aftermarket mice and headsets to get the best gaming performance out of their laptops.

While gaming laptops can be more expensive than desktops, it depends on many factors. The high costs of modern GPUs and the fastest monitors can drive the price of desktops higher than laptops, especially when considering the other required components like mice, headsets, and keyboards.

When factoring the long-term cost of ownership, laptops have a higher price because they have limited repair and upgrade options. Users can’t replace or upgrade parts and must buy a new laptop when the current one gets old or develops a fault.

Gaming laptops cost more than gaming desktops alone. When looking at both options with similar performance, the laptop is almost always more expensive. That said, the price of desktop PCs can surpass the price of a laptop if you add a monitor, speakers, keyboard, mouse, and headset.

Most gaming laptops offer limited upgradability. Users may upgrade the RAM and storage capacity, but parts like the CPU and GPU can’t be replaced because they are integrated into the motherboard. While most desktops are easy to open and upgrade, laptops are different, and some can be quite challenging to disassemble. Opening a laptop can also void the warranty, so it’s best to refer to the user manual before attempting repairs.

The integrated components also make it harder to repair damaged gaming laptops. If the CPU or GPU goes faulty on a gaming laptop, users may have to replace the whole system instead of replacing the part if the unit isn’t under warranty.

Another area where gaming laptops lag behind desktops is the screen size. While desktop users have many options regarding screen size, laptop users are typically limited to 15.6 and 17-inch options. It’s possible to add larger aftermarket monitors to a laptop, but it increases the already high price of the system.

Manufacturers have to scale down the size of components to fit them into a laptop. Some components, like the CPU, have a different design than their desktop counterparts. These parts are designedf to fit a specific motherboard for a laptop instead of having a universal fit for all devices. There just isn’t enough space in a laptop for a full-size desktop GPU, and mobile versions with lower performance are the usual answer.

While gaming desktops have traditionally had far better performance than laptops, the gap has shrunk. Modern high-end laptops offer competitive performance, but it comes at a high price that’s not viable for most gamers who don’t need a gaming computer with high portability.

Which is one is the best for you?

For most users, desktop gaming PCs are a far better option than laptops. Comparatively, desktops cost slightly less and offer better performance. They can be more durable depending on the case, and users can upgrade or replace components whenever needed.

On the other hand, gaming laptops are better for people who require a portable solution. They are compact enough to fit into a bag and allow users to play on the go. While they are expensive, there is no substitute for the on-the-go gamer.

Between the two options, desktops are the best option for users who want the best performance and customization and repair options. Laptops are best for users who frequently travel or need a degree of portability when they commute to work and back.