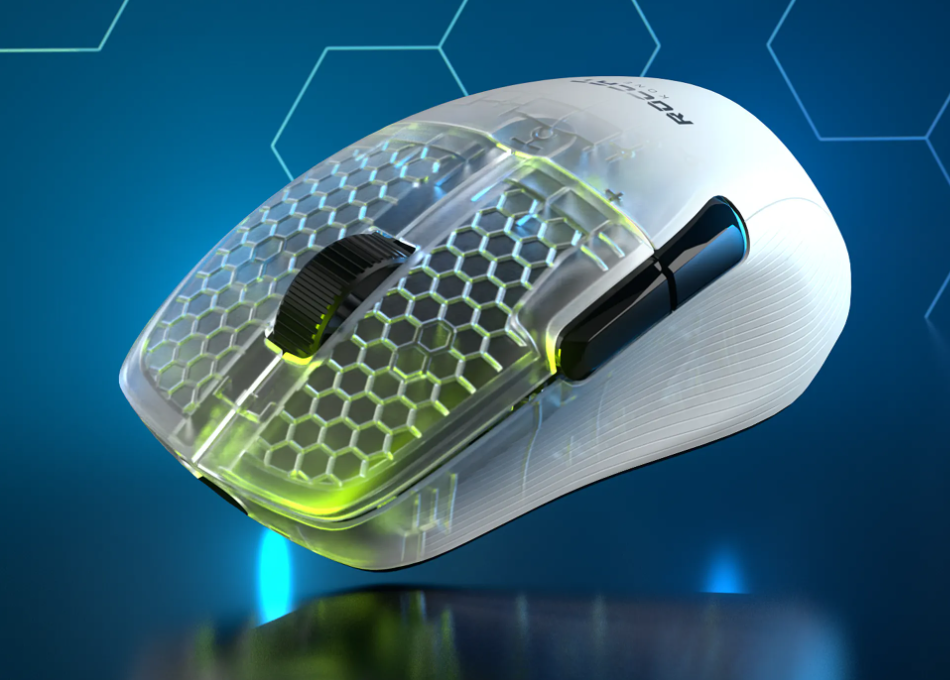 If there’s one thing ROCCAT knows how to do, it’s creating fresh takes on aging ideas.

It takes something special to stand out in the crowded lightweight gaming mouse market. With every company advertising its mice as being the next big thing in lightweight gaming, few actually deliver a new take. ROCCAT successfully avoids mundanity with its Kone Pro Air design, but performance is another story.

The Kone Pro Air echoes its wired sibling’s best features but our review unit hit a major snag on its way to glory.

ROCCAT’s Kone Pro Air is a 75-gram wireless mouse featuring the brand’s unique design language. Coming in just 12 grams heavier than its wired sibling, the Kone Pro Air retains an impressively light weight for a wireless gaming mouse. For comparison, the Razer Viper Ultimate weighs in at 74 grams, edging out the Kone Pro Air by a mere gram.

ROCCAT’s lightweight wireless option comes loaded with Titan optical switches. These proprietary switches feature a 100-million-click lifespan, which is 30 million clicks longer than Razer’s optical mouse switches. Titan optical switches have a soft and airy feel to them that avoids feeling mushy, though they might not be for everyone. Titans have a crisp click to them but don’t feel quite as snappy as the Logitech G Pro X Superlight’s.

Like the Kone Pro, the Air features the Titan Wheel Pro. ROCCAT’s proprietary scroll wheel uses a thin aluminum design to help cut down weight. The Titan Wheel Pro feels a bit harsher than a standard rubberized scroll wheel, but it’s easy to get used to and never presented any issues in-game.

The Kone Pro Air uses the same 19,000 DPI Owl Eye sensor as its wired sibling and features an industry-standard 1,000Hz polling rate. Our reviewer can vouch for this sensor as being a solid and consistent performer, but connectivity issues hampered their experience this time around.

ROCCAT’s Kone Pro Air mouse supports both wireless and Bluetooth connections. While Bluetooth is a nice backup connection if you’re working or very casually gaming, this connection type is largely disregarded as a viable gaming option. Having both connections is a plus, but the wireless connection was a major concern with our reviewer’s unit.

Our reviewer regularly experienced delays in their mouse movement. The mouse often locked up in one place and stuttered frequently on the wireless connection. A similar connectivity issue occurred with the Pwnage Ultra Custom Symm. Our reviewer tried the Logitech G Pro X Superlight and the Ultra Custom Ergo in the same USB ports and had no issues.

After speaking with a ROCCAT representative, the wireless connectivity issue seems to be isolated to our reviewer’s copy of the mouse. The company said it’s working on a fix for the connection issue our reviewer experienced. Our reviewer will update this article with any new information regarding the issue.

Pwnage mitigated connectivity issues by including a wireless receiver extender that connects the dongle to the charging cable to bring the wireless dongle closer to the mouse. ROCCAT doesn’t include a receiver extender, which is a big oversight considering this specific copy of the mouse isn’t reliable at just three feet away. Our reviewer would like to see ROCCAT include a receiver extender in the box at this price point. Even if this is a case-by-case issue, there should be an included solution given the mouse runs over the hundred-dollar mark.

ROCCAT includes a pair of heat-treated PTFE feet on the mouse and another in the box. These feet are easily some of the best on the market. It’d likely be a piece of cake to hit flicks if the wireless connection was more reliable. ROCCAT’s feet outperform the feet on the Logitech G Pro X Superlight, which is no minor feat.

Plugging the mouse in with the included USB-C PhantomFlex cable retains much of the glide, but it doesn’t feel quite as light on its feet. Given the connection issues, you could use this mouse in its wired configuration, but that essentially defeats the purpose of paying the wireless premium.

The Kone Pro Air’s saving grace is its remarkably comfortable shape. Like the wired version, the Air’s shape is a near carbon copy of the Kone Pure and sits somewhere between the Razer DeathAdder V2 and the Logitech MX518. Both mice are renowned for their comfort and performance, and the Kone Pro Air follows suit.

ROCCAT’s Kone Pro Air measures identical to its wired counterpart at 2.83 inches (7.2cm) wide and 4.9 inches (12.56cm) long. Its size makes this mouse friendlier toward medium to large hands. Having a slightly wider flair at the rear and a pronounced hump may cause some discomfort for users with smaller hands.

For reference, our reviewer’s hand measures 7.7 inches (19.5cm) long and 4.1 inches (10.4cm) wide. These measurements put our reviewer’s hand in the medium to large category. Users with hands of similar size will likely find the Kone Pro Air to be one of the most comfortable gaming mice to use with a palm grip. The Kone Pro Air is easily one of the most comfortable palm grip mice around.

Another strong point for the Kone Pro Air is its refreshing design. While some lightweight mice are still beating the honeycomb horse to death, ROCCAT is repurposing the honeycomb trope in fresh ways.

The ROCCAT Kone Pro Air shares the same remarkable shape as its wired sibling, but wireless connectivity issues with our review unit hamper what would otherwise be an exceedingly comfortable experience. ROCCAT’s latest effort is a valiant one, but there’s no looking past the connectivity issues of this review unit since there’s no receiver extender in the box. At this price, buyers should expect all these bases to be covered.