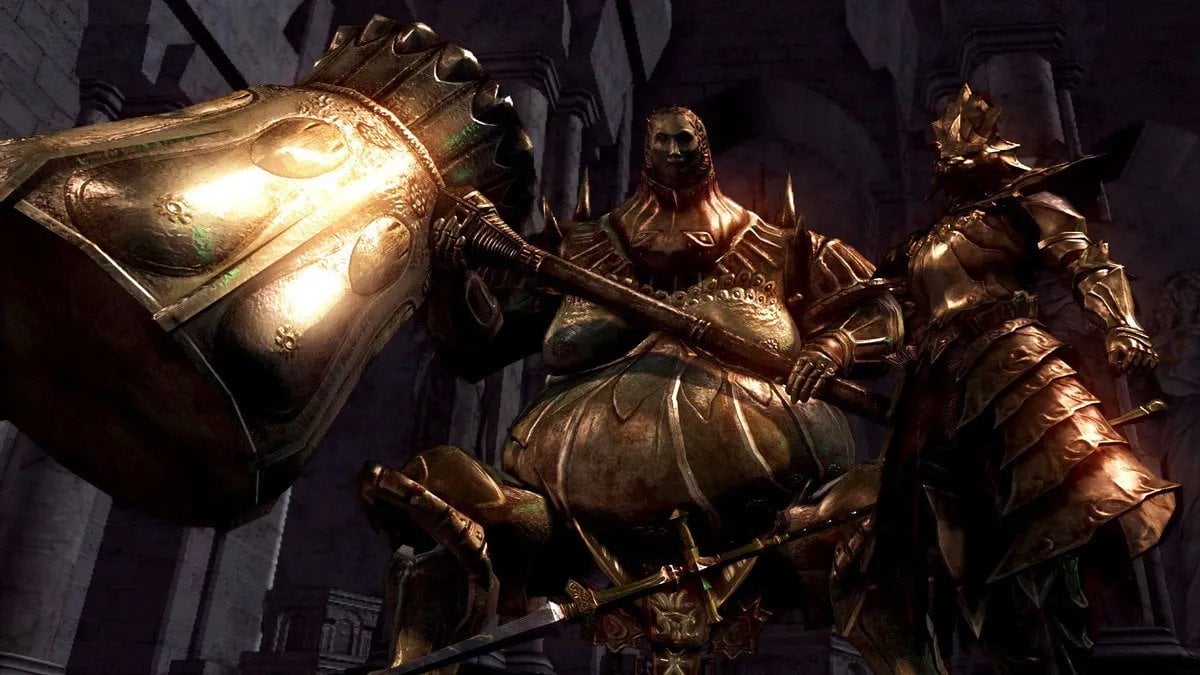 Video games have never been the easiest activity for players to get into. While they are certainly fun, each game presents its own unique set of challenges players must overcome.

These challenges can range from platforming and puzzles to quick reflexes and real-time battling against either AI or other human opponents. Some games are understandably easier than the rest, while others can be so difficult they leave lasting memories on players for years to come.

This list comprises games from the early 2000s and is ranked from easiest to hardest. Difficulty is subjective by itself, so it makes sense that different players might find different games more challenging than others. Despite that, there’s no denying a few games have certain elements that might give the average casual player a run for their money.

Bringing up the rear is the third instalment in the Devil May Cry franchise, Dante’s Awakening. The game features the origins of Dante and is chronologically the first game in the series. It is a third-person action-adventure game where Dante must come to terms with his origins and defeat his evil twin brother Virgil.

Despite it holding the No. 10 slot in this list, the game is no easier when compared to most others. In fact, the original game was so difficult, Capcom released a Special Edition that let players reduce the difficulty and made it playable for newcomers to the series.

Hades is a roguelike dungeon crawler by Supergiant Games. In this game, players play as Zagreus, the fictional son of Hades while he attempts to escape Tartarus and his father’s grasp. The game has a fun mechanic where if Zagreus dies on his journey, he will retain his experience and resources while unlocking more back in Tartarus. Essentially, this mechanic makes Zagreus stronger each time he attempts to escape, allowing him to progress further through the world.

The difficulty of this game stems from the fact that if Zagreus dies, he starts all over again from the beginning. This has divided the fanbase, with some thinking it’s too punishing while others think it is the perfect blend of fun and challenge.

Cuphead is a run-and-gun shooter with platformer elements, created by Studio MDHR. The appeal of this game lies in its rubber hose graphics and animation, which is very reminiscent of the early days of cartoons in the 1930s and 1940s. But don’t let the charming visuals and cartoonish music fool you; the game can be punishing if players are not ready for it.

With bullet-hell mechanics thrown into this world, the levels can be quite challenging to finish. The boss battles are charmingly drawn and animated and while difficult with their multiple phases, feel very rewarding to beat with either Cuphead or Mugman. Making a deal with the Devil never turns out well, which is why players need to lead the siblings to victory by clearing their debt.

Darkest Dungeon is quite possibly the most realistic dungeon-crawling adventure experience a game has been able to provide. This roguelite RPG by Red Hook Studios takes players through a dark, medieval world where players start off as an adventurer venturing through dungeons underneath their mansion for the prospect of treasure.

This journey is unlike what most players would be used to. They will have to deal with real problems such as hunger and stress. If these issues get out of hand, players and their party members may be afflicted by various status conditions as a consequence. While some of these afflictions may actually enhance the party as a whole, most of them can hamper battles and lead to the death of the party. This mechanic combined with permadeath for the party members makes this game a difficult venture for any novice adventurer.

The Shin Megami Tensei series is a beloved franchise in Japan. While not as famous in the rest of the world due to lack of localization, the series generally languished behind and subsequently failed to capture a global audience. All of this changed with the launch of Shin Megami Tensei III: Nocturne, Atlus’ first true third-person 3D game featuring the now-iconic Demi-Fiend as the protagonist.

Nocturne changes the battle mechanics of the older Shin Megami Tensei games in their turn-based battling style, now reminiscent of classic RPGs of the past. The press turn system was unique to the series as well, where the player gains an extra turn in battle if they land a critical hit on the enemy or strike its weak point.

When it comes to the enemies, each of the demons can be fought and defeated as well as recruited to the Demi-Fiend’s side if they so choose. Demons can also be fused to create stronger demons as the game progresses. The initial release of the game was met with widespread praise, but the difficulty curve deterred a lot of players from progressing further in the story. This was alleviated with the release of the remastered version in recent years, adding a Merciful difficulty level, giving this game the No. 6 spot on this list.

Celeste might be a controversial pick for this spot, but anyone who has played this game will know why we have chosen to rate it all the way up here. Players play as Madeline, a young girl struggling to cope with her mental health issues and wishes to scale a fictional version of Mount Celeste. The gameplay is a combination of a platformer with a minor element of bullet-hell mechanics.

The gameplay is reminiscent of old pixel-art style games, which leads players into a false sense of security with many of them assuming it will be easy. Scaling the mountain is no simple feat, however, with loads of obstacles and spike traps barring progress while Madeline finds her way around them. The platformer portion of the game also demands immense precision to clear certain areas, making them a bit of a chore sometimes.

The simplistic but challenging gameplay made it a favorite of hardcore gamers and speed-runners who still try to set records to this day.

The series that invented the Souls-like genre and brought the appeal of more challenging games to the market, Dark Souls was a generational series that defined an era. This series is compiled as one entry because all of the three games are very similar to one another. They take place in different lands, but with the same overarching lore.

While the boss battles are the highlight of the Dark Souls series, the punishing levels are a close second. Each area offers beautiful scenery, if not completely ruined by dangerous enemies looking to kill the player at all times. If that was not enough, the concept of rest spots, or Bonfires as they are known in the series, are also dangerous. If the player rests and refills their health at these Bonfires, most of the slain enemies come back to life as well, making trudging through older areas or a run-up to the boss of that area that much more cumbersome.

Whether the player plays as the Chosen Undead, the Bearer of the Curse, or the unkindled Ashen One, each of these games provides its own challenge, making game completion that much sweeter when it does happen.

The second FromSoftware game on this list and a deviation from the Dark Souls series is Bloodborne. Players take on the role of ahunter in the land of Yharnam, fighting enemies straight out of Lovecraftian horrors. With the more human-looking enemies like Lady Maria and Gehrman came the twisted monstrosities like Orphan of Kos and Ludwig.

Bloodborne was a breath of fresh air when it was released, allowing players a brief reprieve from the Dark Souls-style of combat with a faster-paced battle style and no shield. The faster-paced style also made for quick battles that, while exciting, also meant minor mistakes could be severely punished, making it a tough experience for newer players.

This game also remained a PlayStation exclusive, with players new and old firing up their PS4s for another NG+ run of this classic title.

FromSoftware’s latest smash hit and first foray into a true open world, Elden Ring has been taking the world by storm in the last few months. While most of the reasons for this are positive, a subsection of fans had their gripes with this modern classic. Initially, the game was plagued with a plethora of problems, most of which existed on the PC version. These problems ranged from framerate issues to bugged questlines. The most prominent issue was always the difficulty spike, though.

Unlike other FromSoftware titles, which were generally played by the hardcore SoulsBorne community, Elden Ring captured mainstream attention with the involvement of renowned author, George R. R. Martin. This brought in a lot of casual players to this game, and they’ve since experienced firsthand how punishing the game mechanics can be for those not used to the difficulty curve.

Nevertheless, the positives outshined the negatives with both fans and critics praising the game, calling it FromSoftware’s best showing to date.

Our pick for the toughest FromSoftware game and highest overall on this list, Sekiro was a masterpiece of the genre. Pushing the boundaries of the genre-defining Souls games, Sekiro takes players on a journey through Feudal Japan, all seen through the eyes of the main character, the titular Sekiro.

The game allows players to feel what it was like to be a shinobi back in the days of the Edo period, along with some FromSoftware magic thrown in. The game features enemies from Japanese mythology as well as likenesses of prominent fighters from back in the era. With the arsenal of his trusty katana, fireworks, and his prosthetic arm among other items, Sekiro plays through a brutally punishing but equally rewarding world upon completion.

The game offers a lot of replay value, encouraging all sorts of speed-runners and challenge runners attempting to complete the game as quickly as possible while providing hours of entertainment value for all viewers.