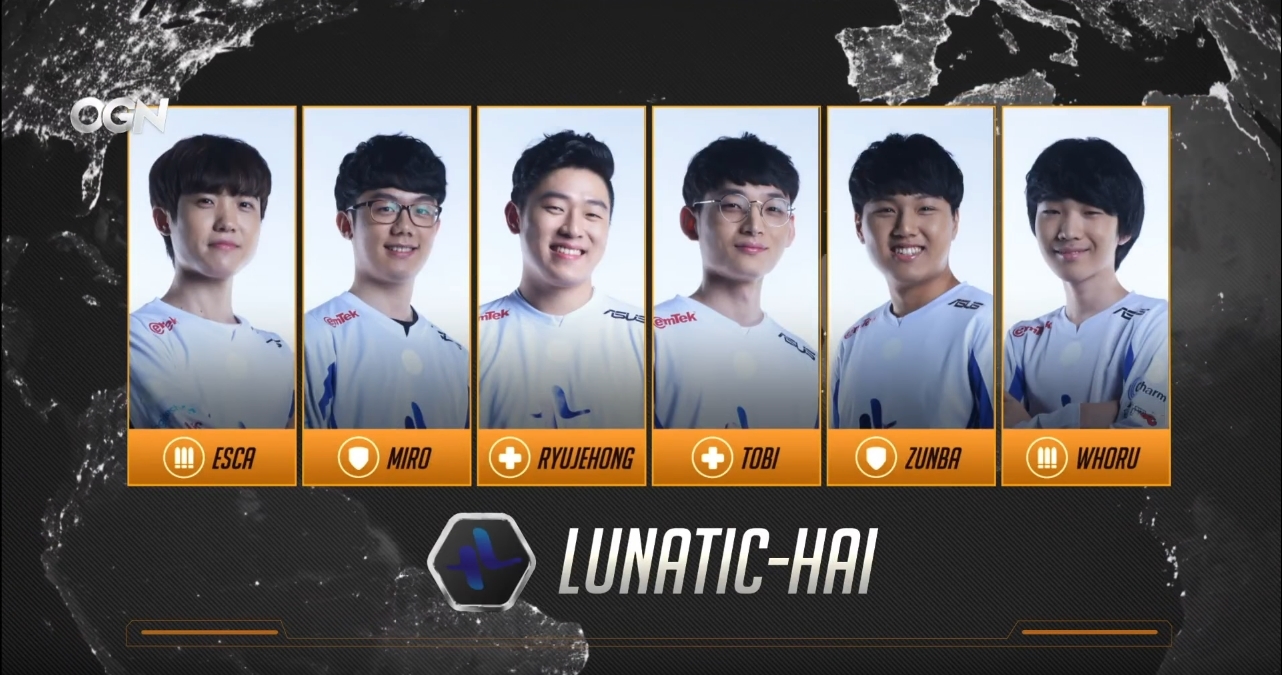 When we consider the community excitement behind the roster and the skill level of their players, Lunatic-Hai’s results have been fairly mediocre. That statement might seem odd considering their deep runs at international events, but when we factor in the number of players on the roster who are the best in the world on meta heroes, we’re forced as logical thinkers to consider why.

To put it plainly, Lunaitc-Hai was playing with training weights. The Korean roster waded into battle with an unnecessary burden they had to compensate for. But now, following some roster moves, both planned and unexpected, the roster of Lunatic-Hai is looking more terrifying than ever and finally is poised to be the super-team they have always meant to be.

Very early in the emergence of the Korean Overwatch scene, there was a joke about one of Lunatic-Hai’s players. Leetaejun, one of their DPS players, was notoriously inconsistent. It was that inconsistency that shaped the joke.

When he was having a good game, the fans would refer to him as Ourtaejun. But frequently, when he would not perform at a top level, he would then be called Yourtaejun, essentially saying it would be better for the enemy team to have him.

Now obviously Leetaejun wasn’t awful. He was a pro and better than all but a select few in the world. But among his peers of other professionals, even his good games were just average. For a team like Lunatic-Hai, who was in contention for the title of best team in the world, having a DPS player who, at their peak, was only average was a huge detriment.

It seemed easy to excuse. Lunatic-Hai was still performing well, but was unable to find international success at the Apac Premiere. To this day, I don’t believe anyone realized the extent to which the stars on Lunatic-Hai could be unlocked without the burden of Leetaejun. The world got their first glimpse of that possibility at BlizzCon 2016, the Overwatch World Cup.

South Korea got a direct invite to the event, and due to clever fan voting, was competing with an insanely stacked roster. Lunatic-Hai sent three players in Miro, Esca, and Ryujehong. Conbox T6 sent their Zarya player Zunba, and two Afreeca Blue players, Arhan and Tairong, rounded out the roster.

It was Arhan’s addition to the roster that had the biggest affect on the play of the Lunatic-Hai members. With an incredibly potent primary DPS player like Arhan on Genji, a large part of the damage dealing responsibility was lifted from Esca’s shoulders and he could focus on backline picks, such as Mei or McCree. The extra defensive utility afforded by Mei and McCree’s crowd control meant that Miro was able to then spend additional time on Winston.

This roster, assembled from a conglomeration of players from three different rosters, shocked the world. It was especially a surprise to many casual fans because the Blizzard pushed narrative at the event was the favorites were either team Sweden or team Finland. They were so good that many began to question if, given time, the temporary roster would be the strongest in the world.

Unfortunately, it didn’t last, as after BlizzCon, the players returned to their home rosters where Zunba and the rest of Conbox were promptly eliminated from playoff contention by Lunatic-Ha,i who themselves were easily crushed in the quarterfinals.

There’s no doubt that Lunatic-Hai was upset with their poor finish in Apex that failed to meet expectations, so they went into the offseason with the intention of rebuilding.

It’s speculation on my part, but I think Lunatic-Hai learned from their time at BlizzCon. They realized, much like we did, that the roster they played with in the World Cup had serious potential. Armed with this information, Lunatic-Hai went about its rebuilding process.

Their first move was to pick up the pieces they were missing, which took the shape of a projectile DPS player and a true Zarya master to enable the dive heavy style of Miro and their hypothetical Genji player.

Keeping in line with the philosophy of building a similar roster to the South Korean World Cup team, Lunatic-Hai picked up Zunba, exactly who competed with them at BlizzCon. Unfortunately, they did not also pick up Arhan, as he remained with Afreeca, but instead found another star talent in Whoru.

All of the pieces were in place and only one problem remained. Their roster was now at eight strong with only six starting positions. It may seem obvious to drop Leetaejun for Whoru and Dean for Zunba, and indeed it makes sense, however, the members of Lunatic-Hai were incredibly close as friends, and did not want to drop anyone. So, as we saw in their first match of season two of Apex, Leetaejun started for Lunatic-Hai instead of Whoru.

But now, after a bizarre scandal, both Dean and Leetaejun have retired from professional Overwatch. It is a shame, as both were as experienced as they come in Overwatch, and in Dean’s instance, he was proven to be an above average tank player.

But, the Lunatic-Hai roster we are left with now is far stronger than what we saw competing in the first season of Apex, and ultimately, these changes will be better for the roster in the long run.

When I think of the original Lunatic-Hai roster’s tank players, I remember two strong primary tank players. Both Miro and Dean as players had primary engage mentalities. Also, neither of them put in the time on Zarya to push her kit to its limits. With how consistent Zarya has been as a staple meta pick, it was crucial for Lunatic-Hai to pick up Zunba.

Zunba’s name is up there with the likes of Bernar for excellent Zarya players. He doesn’t come close to matching the star carry power of Zaryas like Hoon, but that doesn’t matter. What’s important is how well Zunba operates with his primary tank player.

Zunba’s previous team, Conbox, was known for the synergy between their tanks and support players. Zunba and the supports of Conbox worked together to enable Gamsu to be a carry force.

This same style carries over to Lunatic-Hai’s roster, except that in each position, the talent level has now gone up. Ryujehong has long been an enabler for Miro’s aggressive style, especially when Miro plays Winston. But now, Miro, who’s Reinhardt has massively improved, also has a proper Zarya player shielding him to enable his aggressive primary tank play regardless of his pick.

The supportive style of a secondary tank player was exactly what Lunatic-Hai was missing to enable the carry force of Miro. Zunba fits perfectly into this role, and so far, all evidence points to him being a successful pickup for Lunatic-Hai.

For some odd reason, there seems to be a small trend among top teams needing projectile DPS players; especially with the currently developing meta, having a Genji player is once again looking crucial. It would have been poetic for Lunatic-Hai to pick up Arhan, as well as Zunba, but instead, they recruited Whoru.

That makes it sound like Whoru was a second choice when in fact Whoru, by all accounts, appears to be the better pickup for Lunatic-Hai. Arhan is a DPS player who is given the majority of his supports’ resources. Whether that is Nano Boost, Lucio speed, Zarya bubbles, or just time spent healing him, Arhan is a demanding player.

In all fairness, it has been a successful strategy for Afreeca Blue, but it simply isn’t the way that Lunatic-Hai plays. Instead, many of those resources are put into Miro’s hands. Ryujehong uses his long range healing to enable Miro’s diving, while Tobi uses his speed to put Miro in position to put his hammer on their foes’ faces.

Whoru instead operates with a lower amount of resources put into him, but that does not mean he doesn’t succeed at tearing his foes apart on Genji; instead of doing so with artificial buffs, he capitalizes on the space Miro opens for him. As such, the pair forms a potent diving duo with Winston and Genji.

Now with Dean off the roster, Miro is the only primary tank player, and as such, also frequents Reinhardt. In these cases, he still receives much of the supports’ resources, but due to his lesser mobility, he can’t dive as hard. So because of this, Whoru changes up his own style as well.

He will put down his sword in favor of a chain hook when he switches to Roadhog. Then, in this instance, he places his emphasis on playing for the team. He will position behind Miro’s shield and take part in the Reinhardt shield wars while looking for picks.

His ability to play different styles and at an objectively higher skill cap than Leetaejun are both boons to the roster and paint the future in a positive light.

Despite the mechanical and stylistic upgrades that Lunatic-Hai’s roster moves have brought, I still have yet to mention the largest benefit of these changes. Simply put, the players have designated roles.

On the previous iteration of the roster, Miro, Dean and Ryujehong were often rotating positions. The setup in which each player performed the best was Miro on a dive tank, Dean on Reinhardt, and Ryujehong on Ana. This was plainly obvious to outside observers to be their strongest roster setup, however, for reasons the community still doesn’t fully understand, Miro would occasionally take up Reinhardt, Dean would move to Ana, and Ryujehong would play Zarya. This removed the best Winston and Ana players in the world from their primary hero.

We’re unsure exactly why this was the case, but as far as we know, it was in order to find a team dynamic that could work around Leetaejun so that Lunatic-Hai wouldn’t need to drop him from the starting roster.

Luckily, Whoru needs no such adaptation to work and Zunba actively enables Miro and Ryujehong to play their strongest heroes and styles. This means that each player on Lunatic-Hai can have a fixed role on the roster, which leads to more focused practice and hopefully quicker development for the team as a whole.

This season of Apex features so many stacked rosters and Lunatic-Hai is one of them. Their roster moves have revitalized the team and are allowing their starts to shine. Finally, Lunatic-Hai is looking like the super-team we envisioned they could be.

With the meta shaping up the way it is, it seems likely that Lunatic-Hai will thrive under the new conditions and be yet another threat to the reigning champions, Team EnVyUs.

Do you think Lunatic-Hai can win this season of Apex? Tweet your answer to us @GAMURScom or @GAMURS_OW