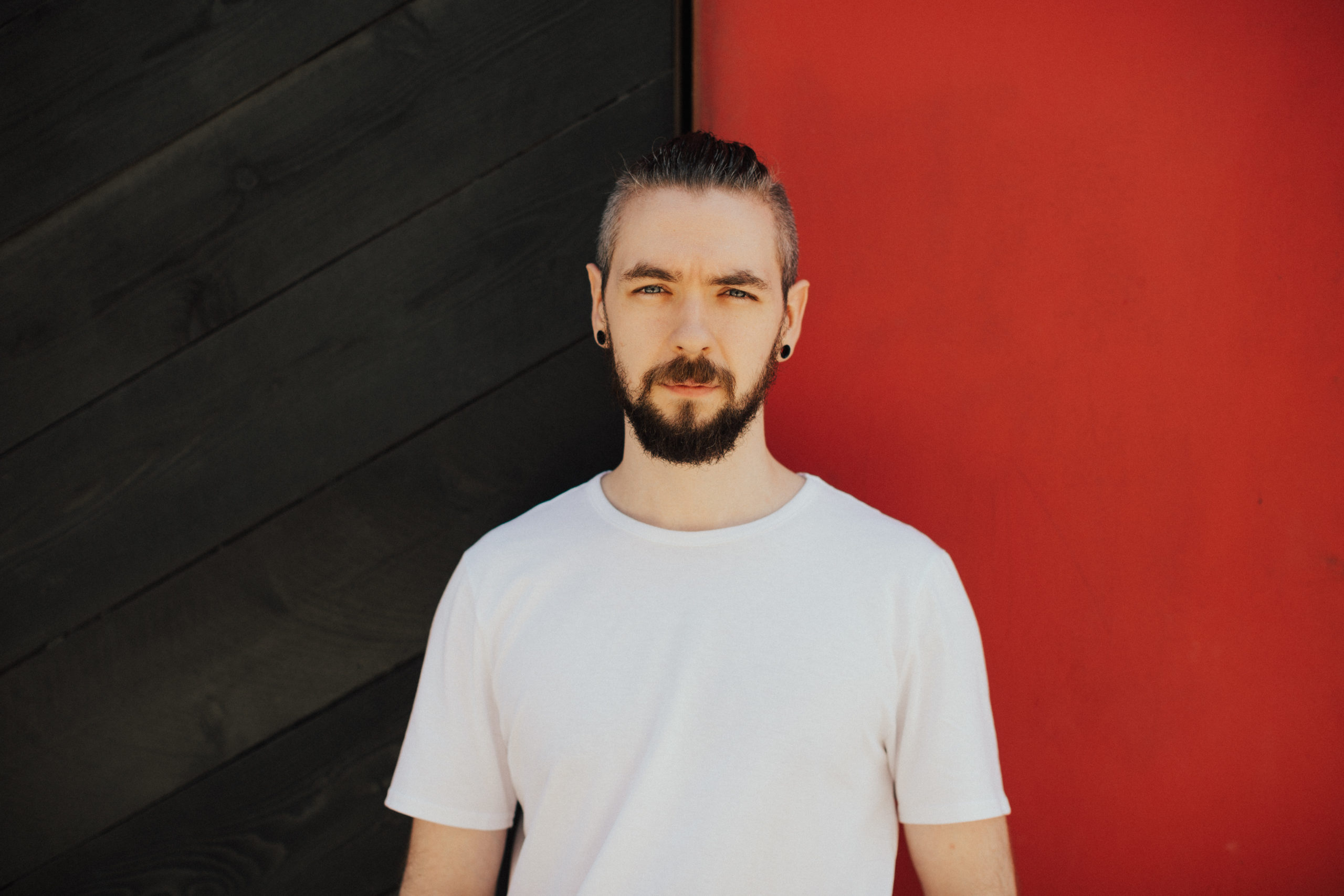 Every morning, Seán “Jacksepticeye” McLoughlin wakes up and injects his Top of the Mornin coffee into his bloodstream before he truly begins his day. He answers emails, checks the schedule for events that day, and then flies by the seat of his pants for the rest of his work. It’s a stark contrast from before his YouTube days—before he had more than 28 million subscribers to his channel.

For about a year and a half, Jacksepticeye was on government benefits because he didn’t have a job, didn’t drive, and lacked direction for his future and his career. Rural Ireland makes it tough for many of the residents living there to commute without a car, so he filled his time by playing video games while he figured out what to do with his life. As it turned out, gaming and watching others on YouTube became one of the most important factors in determining his career.

While he tried to pinpoint exactly what he was going to do with his life, he opened his YouTube channel in 2012 and started creating content as a way to connect with people and to have a place to talk about his love for gaming.

Those who watch all of Jacksepticeye’s videos have a good idea of who he is, but there are few details about where he grew up, what his family thinks of his job, or what he was doing before YouTube took off for him. In his documentary How Did We Get Here, which debuts Feb. 28 on social media platform Moment House, fans will learn more intimate details about his early life and get a close look at his roots from his time in Ireland. It also begs the question, where does he go from here? Is there a point where someone like Jacksepticeye has done it all?

Who was Seán McLoughlin before Jacksepticeye?

Jacksepticeye was born on Feb. 7, 1990, and grew up in rural Ireland with his mother and father, along with his four older siblings. After he dropped out of college, he didn’t have much going for him and played games to fill his day.

“I was very worried about my future and what I would actually end up doing, and I think that’s what drove me to YouTube,” Jacksepticeye told Dot Esports. “I kind of whittled my hours away watching other people make videos and just kind of liked hanging out online and seeing what everyone else was talking about.”

When Jacksepticeye booted up his computer and started recording himself for YouTube, he wanted to do voice acting and impressions while he was playing video games but quickly realized the audience for that kind of content was niche. Over time, his content evolved into what it is today: a young, entertaining Irishman screaming about video games and reacting to content on the internet. But that isn’t all the Jacksepticeye channel is. It’s also a creative outlet for his many other endeavors.

Since he started YouTube full-time, he has had a song of his go gold, created a clothing company with fellow YouTuber Mark “Markiplier” Fischbach, started his own coffee company, been in a feature film, interviewed many celebrities on his channel, and now has his own documentary about his life.

Jacksepticeye’s life immortalized in a documentary

“It starts at the dawn of time, the show opens at the Big Bang,” he joked.

The documentary began as a behind-the-scenes look at Jacksepticeye’s desire to tie stand-up comedy into his content, but its content evolved over time.

“The show kind of blossomed into a story about my life, because I figured that we had good stories to tell,” Jacksepticeye said. “My brother helped me come up with some ideas. And then, we realized then to break up the show into like three acts, it made sense to do like childhood, teenagehood, and adulthood as they were all like, massive, significant times in anyone’s life really.”

Fans will get a detailed look at Jacksepticeye’s upbringing as told by his family members. He and his film crew were even able to visit the house he grew up in, which is now a veterinary office. When he describes his childhood and teenage years, he notes that it was miserable and he suffered from depression, especially during the times in his life when his future was uncertain.

He describes the documentary and the tour as a way to peel back the facade of what it is to be a YouTuber and to be famous online.

“It’s a lot less glamorous than people think. I didn’t grow up doing this from an early age or anything. I just kind of fell into it,” Jacksepticeye said. “I think being able to show aspects of my life is really important. And also bring my family in, because people have seen them sort of in pictures that I’ve posted, but they’ve never heard them speak or talk about different things. And I was really happy because there’s a really small section with my dad in it that people get to actually, like hear his voice for a change.”

What many people forget when watching someone with a large amount of followers is that there is a person behind the screen. Jacksepticeye recently did an interview with The Irish Times, where he talked a bit about how he feels about livestreaming.

“It takes that shine off of you; this is just me, I’m not as amazing as you thought I was. Most of us aren’t,” he said in the interview.

Jacksepticeye said that his quote sounds more menacing than it really is. The intention behind it was that he feels he performs better in edited content since the way his videos are edited is another extension of his personality.

“If I record something on my own and I make a joke, then I can like, either redo the joke, or I can set stuff up or I can kind of make the joke and move on, I don’t really have to think about it,”  he said. “But whenever people are there, there’s always that temptation to look down and be like, ‘are people laughing at the joke I just made?’ And I feel like it pulls me out of my experience because my attention just gets distracted way too easily.”

We know how we got here, but now where is he going?

The title of Jacksepticeye’s documentary begs the question: where is he going now? He’s accomplished a number of milestones in his career between his successful companies, his interviews with celebrities, and appearing in a feature film. Is there a ceiling for a YouTuber’s goals? Is there a point in the life of the Jacksepticeye channel where there is no goal left unaccomplished?

“People always have that idea of climbing the mountain, and then it’s always a struggle to get to the top. But then they don’t tell you what happens when you get to the top, or at least for yourself, what you feel like is the top. And I’m like, ‘no, just go down and climb a different mountain’. There’s plenty of mountains to climb. So I always keep pushing the goalposts of what I want to do, because I feel like my interests and my comfort zone changes constantly,” Jacksepticeye said.

As for what those interests are, he still sticks with his “fly by the seat of your pants” mantra. After making a documentary and a short film called 15 Months, which premiered on his YouTube channel, fans wonder if a full-feature film might be next.

“I think if the stars align, and if it feels right, then I would love to do it, or a TV show or an animation, or podcasts, or something. I just like narrative things. I like trying stuff out and kind of like messing around and see where I can go,” Jacksepticeye said.

Although he came very close to quitting YouTube in 2020, he’s finally found the work-life balance that works for him and will let him continue making content in a way that allows for a healthier lifestyle. He even took a month off from creating any content in July last year. The goal was to see if he could exist without Jacksepticeye as a daily occurrence in his life and if he could still enjoy his life. During that month, he pretended he was never going to come back to the platform and focused on enjoying his free time.

“I came to the conclusion that I can still have a lot of fun in my spare time, even outside of my numbers and my fame online or whatever, and that made it a lot easier to come back,” Jacksepticeye said. “It completely shifted my perspective on it again, because I was making content to chase trends and figure out the algorithm and stuff had been kinda changing from my regular content. And I was doing it for the wrong reasons.”

After that break, Jacksepticeye says he came back mentally stronger than ever and started having more fun with his content instead of creating rules for himself in regards to how often or what he was uploading to his channel. In the days leading up to the release of his documentary, he’s been playing Elden Ring and hasn’t recorded anything, opting instead to simply enjoy the new game.

Now that Jacksepticeye’s work-life balance is in order and his content is more fun to make because of it, fans can rest assured he isn’t going anywhere, and there are still many stories he has to tell, starting with his documentary.

Those who are interested in taking part in the livestream through Moment House can buy a ticket for their time zone on the Moment House website. The film is set to broadcast on Feb. 28 at 7pm local time. After the premiere event, the film will be released on digital and traditional VOD channels later this year via Shout! Factory, including the option to purchase a physical copy.