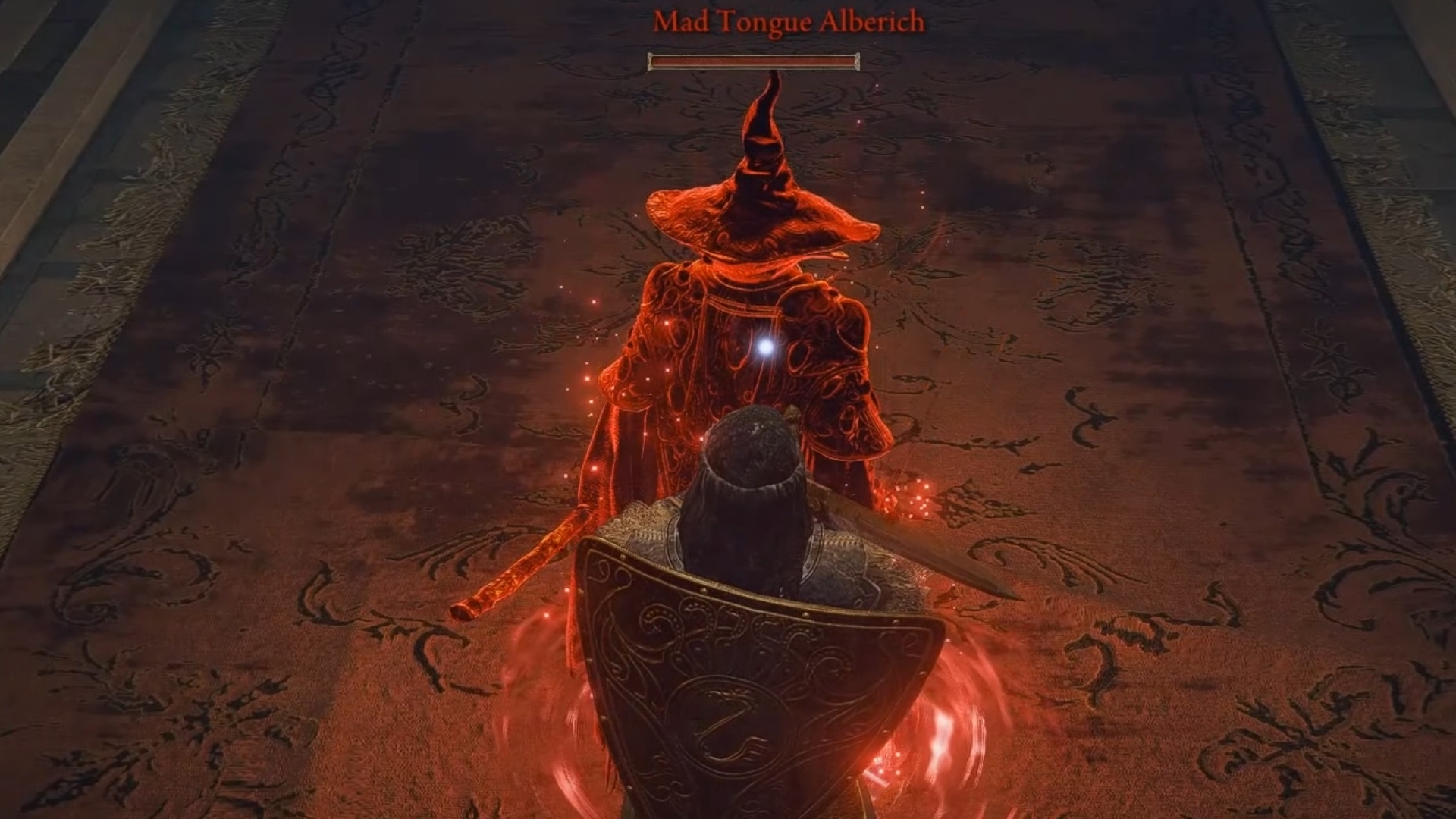 The Roundtable Hold is considered the safest location in Elden Ring. There are numerous NPCs to speak with, some of which reward players with upgrades for their weapons or have shops that players can purchase gear from.

But one of the rooms at the Roundtable Hold actually contains a formidable boss that can drop lower-level players in the blink of an eye. This boss is named Mad Tongue Alberich and is located on the lower level of the Roundtable.

This particular boss is an invader, meaning they will have a red glow around them and a standard health bar over their head. Mad Tongue Alberich has several attacks, including two forms of magic and a giant scythe that they use in multiple ways.

Alberich has two different frost attacks and one poison attack. The first frost attack is a cloud that can deal frost buildup to players if they’re caught inside. It takes a few seconds for the clouds to dissipate. Alberich usually uses the cloud when they’re trying to get some distance from the player.

The second frost attack is an ice projectile that the boss hurls at players multiple times. These are easily dodgeable but can trip players up if they get hit by one. The last magic attack is an AoE poison ring that Alberich uses when the player is in close proximity to them. This attack can be read before it happens but requires players to dodge quickly to avoid it.

With Alberich’s attacks out of the way, players have a few ways they can go about this fight. It’s recommended to be at a level of at least 20 to 30 before attempting to fight Mad Tongue Alberich. Otherwise, players won’t deal much damage to them. Before the fight, it’s recommended for players to equip a weapon with a poison affinity Ash of War. Alberich is especially susceptible to poison attacks.

At the start of the fight, Alberich will bow to players, leaving them a window of three to four seconds to get some hits in. Players can perform a backstab attack during this bow as well, dealing a huge chunk of damage. Using an Ash of War skill is also a way to deal easy damage during the bow. After the bow commences or players backstab the boss, the real fight begins.

If players are using a melee weapon, the best strategy is to use jump attacks while two-handing. Alberich has a tough time defending these attacks. When the boss charges at players, look out for their multi-hit combo attack with the scythe. After they’re done with the combo, there will be a brief window for players to deal free damage. After a couple of hits, dodge away and wait for Alberich to attack again or charge at them with a jump attack.

Dodging during the multi-hit scythe combo and avoiding the magical attacks are what melee characters need to be focused on. Alberich leaves windows for them to be attacked, so as long as players take advantage of these windows, they’ll be able to slowly chip away at the boss’ health. Using an Ash of War during these windows is also a viable strategy, especially those with the poison affinity.

Switching over to magic characters, staying back and casting spells is the only viable strategy. Alberich will charge fairly often, which means players need to keep dodging until they’re far enough away to cast more spells. The best time to attack is when the boss casts the frost cloud or just after they’re finished throwing the icicle projectiles. The boss is fairly easy to avoid if players are dodging away consistently. Using the time Alberich isn’t being aggressive to cast spells and deal damage is the best strategy for magic builds.

Once defeated, Mad Tongue Alberich drops 1,562 Runes, the Taunter’s Tongue, and a Furlcalling Finger Remedy. Now, the Roundtable Hold is as safe as it can possibly be in Elden Ring.