Fortnite is getting an Automatic Sniper Rifle, data miners find 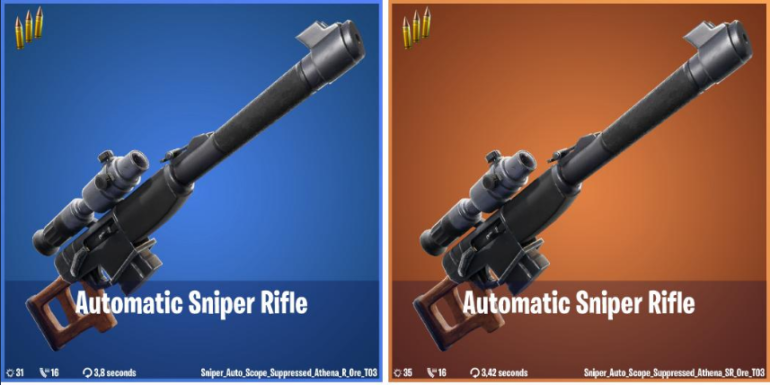 Epic Games sent many items and weapons to the Fortnite vault when season X started today, and now, the game has enough room for the first new guns to arrive.

Fortnite data miners have already found one of these new guns. They say an Automatic Sniper Rifle will join the game soon, most likely in next week’s update.

The information that data miners like HYPEX found about this new gun shows that it’ll be available in Uncommon, Rare, Epic, and Legendary rarities, which is unusual for new weapons. Epic usually releases them in two or three low-rarity variants or in Epic and Legendary variants, so that’s an unusual release if all rarities come out at the same time.

The gun deals 30, 31, 33, and 35 damage per shot, depending on its rarity, and has a 16-bullet magazine size. Its reload time is reduced the greater its rarity is, starting with four seconds for the Uncommon variant down to 3.42 seconds for the Legendary version. Although we have yet to see a gameplay video of the Automatic Sniper Rifle to understand how to play it, its name is a good hint.

If we consider that the Semi-Auto Sniper Rifle shots were triggered whenever the player clicked to shoot, and that they didn’t need to reload after each shot, we can guess that they just need to hold the trigger button for the Automatic Sniper Rifle to shoot nonstop. It might not be too accurate, but it probably shoots faster than the Semi-Auto version and lets players spam shots easily.

The Automatic Sniper Rifle might fit into a very specific niche in the Fortnite meta. The Semi-Auto version was rarely used because players seem to prefer scoped weapons to eliminate opponents in a single shot since it’s hard to land shots with them. That’s why they might continue to prefer using a Heavy Sniper Rifle even after this new Automatic version is out.

Epic has yet to announce and confirm the release of the Automatic Sniper Rifle in Fortnite.