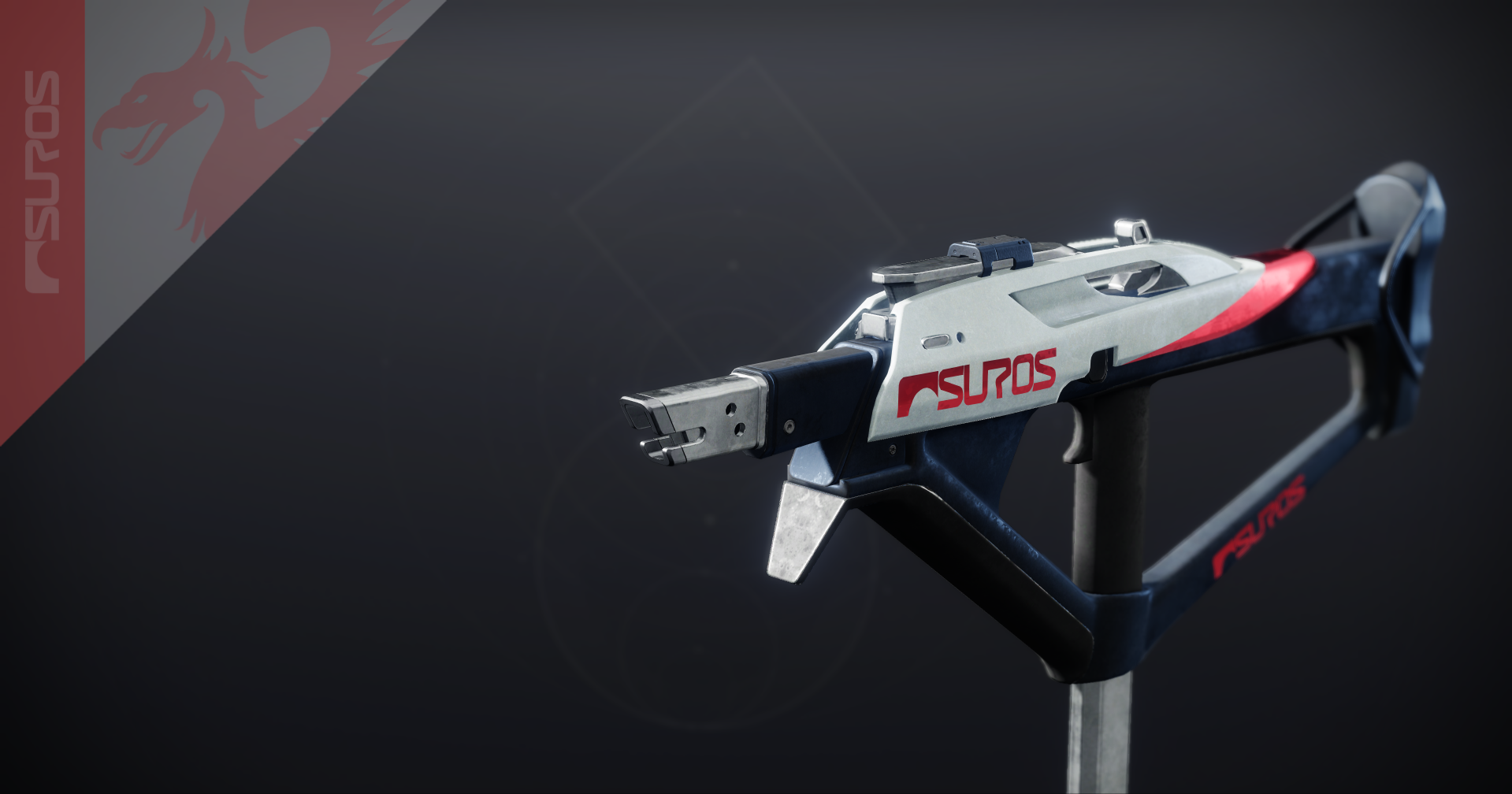 After the dominance displayed in Destiny 2’s Crucible arenas by the Multimach CCX last year, any new 900 RPM submachine gun in the kinetic slot was bound to turn heads. In Season of Plunder, that new contender is the Pizzicato-22, which is a world drop weapon from the Suros foundry.

While the stunning range that Multimach was capable of when using the Iron Reach perk is impossible to compete with for other weapons of its kind, what the Pizzicato-22 brings to the table is high range on top of no sacrifices to the stability. The ideal PvP god roll will still come up a few meters short of the maximum falloff range that Multimach could have but has both a faster base reload speed for dueling and a higher base stability to work with.

When combined with the presence of Rangefinder and Perpetual Motion for easily accessible enhancements to all of its stats, the Pizzicato-22 submachine gun is a perfect alternative for players wanting a more balanced shooting experience. All of this is further assisted by the existence of the Suros foundry’s origin trait on the weapon, which grants an additional boost to handling and flinch resistance after reloading the weapon.

The PvP potential of the Pizzicato-22 is certainly the main attraction of the weapon, but its vast perk pool also contains a number of options that can build an effective choice for PvE as well. Its lack of craftability and its existence as a world drop does leave something to be desired when in the pursuit of a god roll, but enough Umbral Engram decoding should eventually secure you a great roll that will serve you well.

If you’re on the hunt for such a roll of the Pizzicato-22 in Destiny 2, here are our recommendations for god rolls—as well as the best perks in its pool beyond them—that you should be aspiring to in both pantheons of content.

As with any submachine gun of choice in the current meta of the Crucible, building a perfect PvP roll requires a lot of focus on enhancing its range. Fighting the High-Impact pulse rifles at the majority of ranges is a non-starter regardless, but a few additional meters of range can allow a submachine gun to compete in the short to medium distance that any such duelist should be trying to operate in. Corkscrew Rifling, High-Caliber Rounds, and a range masterwork can get the Pizzicato-22 operating with a roughly 22-meter falloff range in ADS before factoring in the bonuses of Rangefinder.

Building a roll for PvE is far more flexible, with a god roll entirely dependent on the type of playstyle that you’re aiming to enhance. Osmosis is here to allow Pizzicato-22 to work with Elemental Well builds, Demolitionist and Pugilist can make up for lackluster ability cooldowns, and Multikill Clip exists as a more traditional damage-buffing choice. With drops of the submachine gun so hard to get, this flexibility is a boon since it means the majority of rolls you may acquire are at least somewhat effective in the majority of content.

With seven perks in both columns, players are certainly spoiled with choices, even if some of those perks are much less flashy than others.

Perpetual Motion has quickly become a mainstay of many PvP builds for weapons, offering sizable increases to stability, handling, and reload speed for the simple act of continuously moving for a number of seconds. Submachine guns tend to cater to mobile playstyles, meaning that Perpetual Motion fits perfectly with the way Pizzicato-22 operates. Any bonuses to stability on a 900 RPM weapon are always good to capitalize on.

Ambitious Assassin was tailor-made to be paired with Multikill Clip on this weapon, with both perks requiring a reload after acquiring a set of rapid kills just beforehand. Overflowing a magazine that will also be enhanced with bonus damage is a recipe for carnage in the majority of PvE content featuring dense swaths of low-level combatants.

Both of these perks provide passive buffs to the weapon that can be useful for players who wish to build into them but are hard to recommend as optimal choices in the face of better options. Mulligan has been a classic inclusion in the perk pools of rapid-fire weapons such as the Pizzicato-22 with how easily wayward many bullets in a spray can travel, but whether or not the chance of returning bullets to the magazine is worth taking up a perk slot is down to player preference.

Hip-Fire Grip offers nice bonuses to many stats but, as the name implies, requires exclusively using Pizzicato-22 without aiming down sights to benefit. This may be a worthy trade for some players, but for this weapon specifically, Hip-Fire Grip feels like a weak alternative to Perpetual Motion.

Eye of the Storm and Fragile Focus

Niche activation requirements pair these two strong perks together in this column. But in the face of Perpetual Motion and Ambitious Assassin’s low costs and high rewards, it’s hard to recommend building around them. Fragile Focus does have PvP potential, granting a boost of 20 range as long as the player remains undamaged, but the knowledge that the perk is non-functional after only minimal damage is received holds it back from greatness. Eye of the Storm is much the same, only that its accuracy buffs are held back by a need to be seriously injured to benefit from them.

Ensemble has traditionally excelled on weapons used for boss damage, such as sniper rifles and linear fusion rifles, which makes its presence here on a submachine gun a little complicated to reckon with. The buffs to handling and reload speed are nice, but the occasions where you will be close enough to allies in the majority of content to benefit from it are few and far between. If you want to improve these stats, there are far easier paths for doing so, such as Perpetual Motion in the same column.

Rangefinder is somewhat underrated as a perk since it can be hard to feel its effects in moment-to-moment gameplay. But the buff to both the weapon’s zoom level and the falloff of its aim assist specifically act as small but essential improvements to the feel of the submachine gun in the majority of PvP fights. Bullet hoses can already be a struggle to control, so the improvements to the Pizzicato-22’s aim assist at longer range can allow more bullets to hit their intended target and achieve the kill quicker.

These two perks serve as Pizzicato-22’s damage options. Many players may not even feel a need to invest in its damage, but for those who do, both Multikill Clip and Swashbuckler can be incredibly effective depending on your build. Swashbuckler, however, is somewhat hampered by the fact that its synergistic utility perk, Pugilist, is also in the second perk column rather than able to combine with it in the first column. Multikill Clip suffers no such complications, making it the easiest of the two to recommend for the majority of players.

For players who like to reserve their primary weapon for utility, Pugilist and Demolitionist’s presence here will be a perfect fit. With the 3.0 rework of the Light subclasses making abilities stronger and faster to recharge than ever, further gifting those abilities additional energy generation through the choice of weapons and perks is a tempting path to take. 900 RPM submachine guns are already pretty effective at clearing out minor-class enemies without additional damage perks, making a build like this very viable for PvE. It is only hampered by the perks’ place in the second column, preventing them from synergizing with the likes of Swashbuckler.

Osmosis might not be the first choice of perk for many players, but its power can’t be understated. With many Aspects and Fragments of both Stasis and the Light subclasses requiring weapons that match the elemental type to work best, Osmosis grants players the opportunity to turn their kinetic weapon into such a matching weapon.

This can allow Pizzicato-22 to benefit from things such as Volatile Rounds on Void, generate Elemental Wells, and benefit from the damage boost of the Font of Might mod. The 10 percent damage bonus that kinetic weapons inherently benefit from may be lost in the process, but the rewards are often worth it.

Threat Detector isn’t a bad perk by any means but struggles in the face of its competition in this perk column of this specific weapon. With so many options already available for improving and enhancing stats such as stability and handling through perks like Perpetual Motion or Hip-Fire Grip—both of which aren’t competing with Multikill Clip or ability generation perks for their spot—Threat Detector is a little overshadowed. It could be combined with something like Hip-Fire Grip or Perpetual Motion for a stat-boosted machine of a workhorse weapon, but the benefits don’t outweigh the potential other perks you’re missing out on by going down that path.