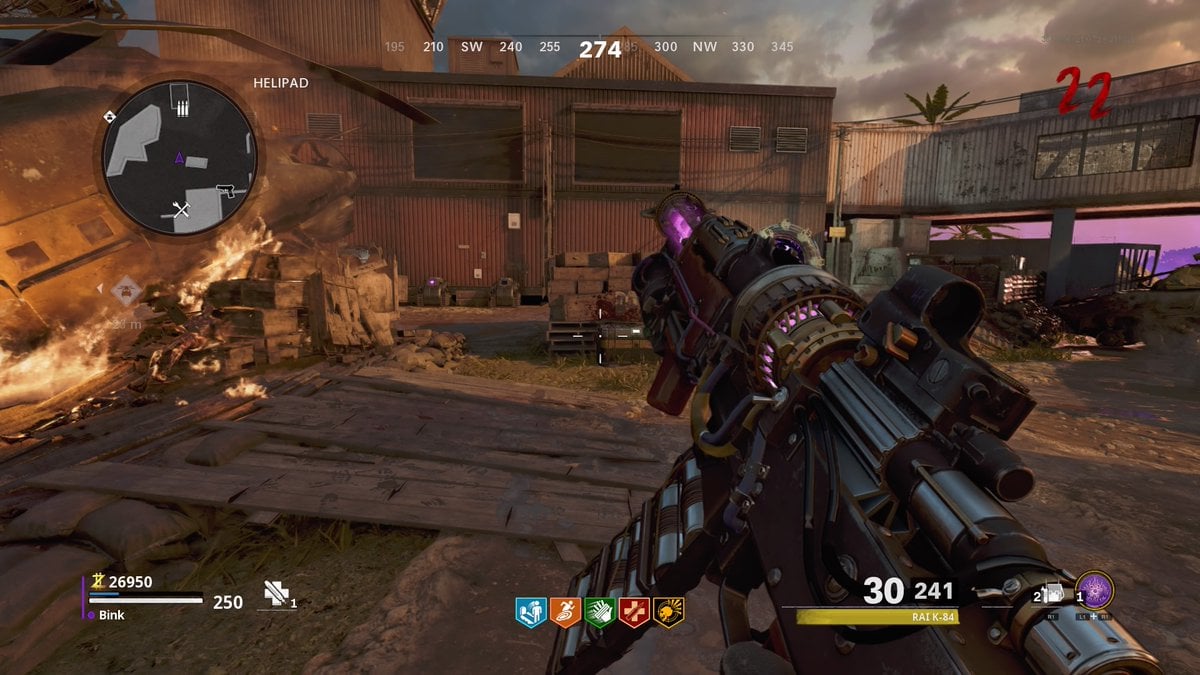 The first post-launch Call of Duty: Black Ops Cold War Zombies map, Firebase Z, is now available to play—and it’s a lot of fun. The map is free for anyone who already owns Black Ops Cold War, so all you have to do to try it out yourself is download the latest update and start playing.

Just like most other Zombies maps in Call of Duty history, Firebase Z comes with a unique Wonder Weapon. The RAI K-84 is an incredibly strong gun that can be shot like an assault rifle or a grenade launcher. In its assault rifle form, the RAI K shoots Ray Gun-like ammo. You can switch to the gun’s grenade launcher form by pressing up on the D-pad. This will allow you to shoot an energized blast that can be detonated by shooting at it with the gun’s regular bullets.

Since this weapon is so powerful, it obviously isn’t easy to get. If you’re lucky, you can pull the RAI K from the Mystery Box or get it as a potential legendary reward by doing Trials. But there’s also a way to get a “free” RAI K by completing a lengthy process.

Here’s what you need to do to build your own RAI K in Firebase Z.

Before you start the process of collecting RAI K parts, you’ll first need to turn on the power on the map. To do this, you have to activate three Aether Reactors spread across the map. The reactors can be found in Military Command, Mission Control, and Data Center. After spending 500 points to start up each reactor, you need to protect the collection units from incoming zombies. Once you’ve finished activating all three Aether Reactors, the power will be turned on across the map and you’ll unlock the Pack-a-Punch machine.

After turning on the power, the next step in building the RAI K is to go to the Weapon Lab area of the map and pick up the blueprint that’s hanging on the wall above a workbench. This will cause a corpse to spawn in near a burning tank in the Scorched Defense area of the map. Interact with this zombie to start a small cutscene where you’ll retrieve an eye.

After collecting the eye, go back to Weapon Lab and scan the eye in the retina scanner. This will turn on a computer and open a drawer that has a Locker Key for you to pick up.

Take your newly acquired Locker Key and go to the Barracks area of the map to start opening up some lockers. This will cause one of the new Mimic boss zombies to spawn in. Kill the Mimics until one of them drops the Barrel Assembly part for the gun.

After you pick up that part, head back to Weapon Lab and use the computer. This will start a sequence that requires you to know your way around a dartboard. The computer will stop at three points that correspond with three numbered spaces on a dartboard. Make sure you remember where the computer stopped or write down these numbers.

Then, go to the Village Mess Hall (to the left of the Pack-a-Punch machine) where you’ll find an actual dartboard. Shoot the three spots that match your numbers from the computer sequence in that order, followed by a shot to the bullseye, to get the Aetherium Converter part for the RAI K.

Once you’ve completed the dartboard step, you’ll then need to progress your game to at least round 15 so the Mangler boss zombies start to spawn in. When you see a Mangler, you have to shoot its mechanical right arm off. If you do it correctly, it’ll drop an Uncharged Power Cell.

Take the Uncharged Power Cell to Weapon Lab and place it on the table that’s directly in front of you when you walk into the room. You’ll then have to let it charge for two rounds before you can pick it up. But this is the last step in the process.

Once the power cell is fully charged, you can pick it up and head to the original workbench in Weapon Lab where you’ll now be able to build your free RAI K. This may seem like a lengthy process, but it’ll be worth it in the end.

Unlike Die Maschine’s Wonder Weapon, the D.I.E. Shockwave, you don’t need to do additional steps to upgrade the RAI K. You can simply upgrade it into the Discordian Disruptor by using the Pack-a-Punch in the Atrium area of Firebase Z.