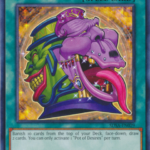 Draw cards in Yu-Gi-Oh! help you achieve victory by gaining access to all your cards more frequently.

Card draw is important in games and YGO is no exception. Without it, you’ll be stuck with a lackluster hand and won’t be able to use your entire deck before the match is over. While some cards have a decent power curve, others such as Pot of Greed are overpowered and are either banned out or disabled in various formats and tournaments.

Here are the five best draw cards in Yu-Gi-Oh!.

Pot of Extravagance’s potential is limitless, allowing you to banish a number of cards from your Extra Deck and draw one card for every banished one. Depending on the game state, you can draw either one or two cards. But another downside is you won’t be able to draw any cards for the rest of the turn.

Upstart Goblin allows you to draw a card at the cost of giving your opponent 1,000 LP. The small LP boost your opponent will get is insignificant compared to the card advantage you can build with this card. It is limited to only one in the deck due to how powerful the effect is.

Pot of Greed is arguably the strongest card in the list, having no drawbacks for drawing two cards. The card allows your deck to be much more consistent, therefore drawing a ban. It can’t be used in most formats since it stops players from thinking about their draws to build a card advantage.

Pot of Desires is similar to Pot of Greed in the way that it allows you to draw two cards. But you need to pay 10 cards from the top of your deck to do so with Pot of Desires. The card is very strong and is limited to one per turn, otherwise players would be able to quickly burn through their deck to refill their hand.