June 2021 marks the end of Q2 for Twitch and Facebook Gaming, and both streaming platforms saw massive growth in overall viewership year-over-year, according to Rainmaker.gg, StreamElements’ analytics partner.

On Twitch, this increase came despite many of the platform’s top categories seeing significant drop-offs in viewership once summer began. Of the top 10 categories, eight saw a decrease in viewership, with four losing over 20 percent compared to May.

Grand Theft Auto V had the biggest drop-off at 33 percent, while Dota 2 and World of Warcraft were the only games that saw an increase in viewership thanks to the WePlay Esports AniMajor and the launch of Burning Crusade Classic, respectively.

The only games to drop out of the top 10 for June were Apex Legends and Resident Evil Village.

Asmongold jumped up into the top 10 streamers for June, seeing a 53 percent month-over-month increase in hours watched thanks to the resurgence of WoW and the Burning Crusade Classic launch.

VTubers are still growing on Twitch too, with six of the top 10 VTubers having seen large increases in overall viewership from January to June, led by AdmiralBahroo at 2.5 million hours watched. 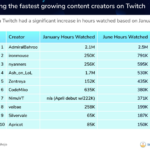 Related: What is a VTuber?

Rainmaker.gg noted that ASMR has continued to see steady growth on Twitch, breaking eight million hours watched in June. The Pools, Hot Tubs, and Beaches category isn’t far behind at just under eight million hours, with both Amouranth and Indiefoxxx being in the top 10 for each category—though that might change with their recent bans.