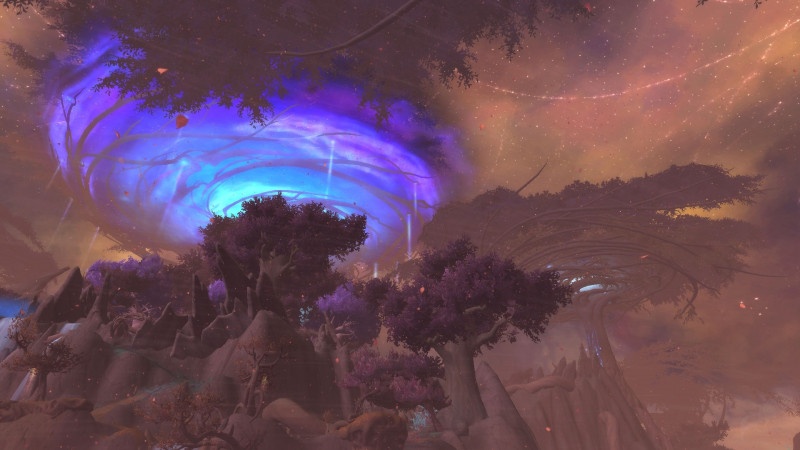 With World of Warcraft: Shadowlands‘ releasing in October, the longstanding MMO introduced a new wave of content to an already expansive catalogue.

Throughout the expansion’s launch cycle, the most intriguing content for many players was the set of dungeons that were released alongside the game. These five-man instances have been a part of WoW’s foundation since its inception, and as time goes on, the game’s dungeons grow, evolve, and improve from expansion to expansion.

Shadowlands introduced eight new dungeons. Here they are ranked from worst to best.

On paper, Theater of Pain should stand out as one of the most intriguing dungeons in all of Shadowlands. But once you get inside, you quickly realize that the instance feels more like an unengaging, repetitive drawl towards its inevitable end. The prospect of continuing the campaign players got to experience in Maldraxxus in a large-scale arena-like dungeon should have been something to really look forward to. But in practice, the dungeon falls flat in comparison to the rest of the expansion’s lineup.

Perhaps the biggest downfall of Theater of Pain is its size. While larger dungeons usually are meant to feel like an epic experience, Theater of Pain is constricted by the various portals that players will be taking to get from room to room. Additionally, none of the encounters truly leave a lasting impact. Xav the Unfallen’s “Blood and Glory” phase is definitely a fun moment, but beyond that, Theater of Pain relies on classic, cookie-cutter mechanics all-around, leaving a ton of missed opportunities throughout the dungeon.

De Other Side presents itself as a unique dungeon in concept, taking players from room to room as they traverse around one singular ring. By allowing players to visit different locales and areas during the course of a run, De Other Side allows players a glimpse into the afterlife, while giving them an update on what Bwonsamdi and other characters have been up to since the events of Battle for Azeroth.

But while a lore dump is always an exciting prospect, De Other Side feels more like a workshop for cutting room floor ideas that all seem jumbled up together in one instance. Locations like Ardenweald, Zul’Gurub, and Mechagon have absolutely nothing in common, and this dungeon just feels like an excuse to get every misplaced idea into one cohesive unit. To top off its lack of central theming, De Other Side falls flat when it comes to many of its actual mechanics, as well. All four of the boss fights feel unengaging and repetitive—especially the final boss, Mueh’zala, whose two-phase mechanics will make players feel like they’re running into a brick wall just waiting to do something exciting.

Let it be known that Plaguefall is a fun dungeon with a ton of cool mechanics. But the reason it falls on the back end of this list is because it doesn’t have enough of those impressive mechanics and fun moments throughout its entirety to propel it into the upper tier of dungeons.

There are many moments in this dungeon where players will most definitely be wanting more out of it considering how much potential an instance like this really has. Bosses like Doctor Ickus and Margrave Stradama are chaotic, fun fights that bring out the best in talented, quick-footed players. The other two encounters, however, don’t really bring much to the table. Plaguefall’s linearity and ultimately repetitive theme makes every boss room feel similar, and if there’s any one takeaway from this dungeon, it’s that consistency is key. Every other encounter feels like a rollercoaster between high-octane gameplay and incredibly boring button mashing. If Plaguefall was a bit more consistent from start to finish, it definitely would have reached the upper echelon of Shadowlands’ dungeons.

While The Necrotic Wake falls a bit short of the mark in comparison to some of Shadowlands‘ other dungeons, it definitely does succeed in some areas. Namely, the fact that it is a direct extension of the Bastion campaign is a factor that works in its favor. Being able to pick up exactly where you left off in the main story in this dungeon is certainly intriguing.

Additionally, the boss fights are engaging and intense, as encounters like Surgeon Stitchflesh and Nalthor the Rimebinder give players a chance to flex their muscles when it comes to dodging abilities and perfecting their positioning. Its difficulty can be confusing and frustrating at times, especially when dealing with abilities like Amarth’s “Final Harvest” and Stitchflesh’s “Meat Hook.” But overall, The Necrotic Wake presents a new take on many old mechanics. Although a fifth-place ranking on this list might not seem encouraging for the dungeon, it’s not to say that The Necrotic Wake is a bad instance by any means. If anything, it’s just the lowest on the ladder out of all of the expansion’s stronger dungeons.

Right alongside Plaguefall and The Necrotic Wake, Spires of Ascension is one of Shadowlands’ most linear dungeons. There’s only a few places where players can choose to take different routes to get from boss to boss, but ultimately those decisions don’t matter. What makes Spires stand out over the other two instances though, is its strong combination of engaging mechanics and intriguing themes. From start to finish, the instance is beautiful, and the idea of spending time there doesn’t feel too intimidating.

And frankly, players will be spending a good amount of time here. Out of all the instances that Shadowlands has to offer, Spires of Ascension might just be the most difficult. Each boss hits like a truck, and every encounter has at least one mechanic that could prove deadly if not played around properly. But that’s exactly what brings the dungeon so high on the list. The mechanics that do hit hard in Spires of Ascension don’t feel cheap. You aren’t left scratching your head if you die during a boss fight. The difficulty level is engaging enough where players can look back at a boss like Kin-Tara or Devos, know exactly where they messed up, and still feel good enough to give it another shot.

Without question, Sanguine Depths is one of the strongest dungeons in Shadowlands. With an overall thematic presence that guides players from one room to the next, no encounter feels too much like the last, and each boss fight in the dungeon feels incredibly unique and original.

Sanguine Depths is one of the only dungeons in Shadowlands to really hone in on the overall story of the expansion, while still bringing a unique experience to the table. If anything, the dungeon feels like an extension of the game’s main campaign, while also serving as a transitional moment into the expansion’s true endgame. As a proper bridge for the story, Sanguine Depths provides players with a distinctive experience that can’t be found or replicated in any other instance.

Players are called upon to retrieve and rescue a secret prisoner from the bowels of the dungeon. Upon defeating the third boss, Grand Proctor Beryllia, it’s revealed that this prisoner is a living holy artifact, a Naaru known as Z’rali. To then complete the dungeon, players need to call upon Z’rali to grant extra protection from certain mechanics found in the later stages of the instance, impeccably combining the story elements of the dungeon with its gameplay elements. Overall, the presence of unique boss fights, strong thematic delivery, and key story components make Sanguine Depths one of the best dungeons in Shadowlands.

Despite only being a three-boss dungeon, Mists of Tirna Scithe is able to work in so many great moments. The limited amount of time players will spend here in comparison to other Shadowlands dungeons genuinely feels productive and engaging, as the dungeon is filled to the brim with unique boss fights and mechanics that WoW largely hasn’t seen before.

Mists of Tirna Scithe sports many standout moments, including the first-of-its-kind matching puzzle in between the first and second bosses, as well as the chaotic, multi-phase fights throughout the entirety of the dungeon. But if there’s one element of Mists of Tirna Scithe that really makes it stand out as a top-tier dungeon, it’s the complete versatility and uniqueness that players will experience on a run-to-run basis. Between the countless combinations of directions that players can experience through Mistcaller’s puzzle, as well as the varying routes that groups will take to reach the final boss, Mists of Tirna Scithe sports an incredible amount of variety and replayability for having the least amount of encounters of any dungeon in Shadowlands. In comparison to other three-boss dungeons from expansions past like Maw of Souls and Court of Stars, Mists of Tirna Scithe stands out as an absolutely packed instance, leaving no stone unturned with its limited resources.

Halls of Atonement is quite possibly the quintessential Shadowlands dungeon, as it checks every box that makes an instance great. Too much of either variety or linearity is a bad thing, but Halls of Atonement manages to balance the two perfectly. The introduction to the dungeon offers players a ton of different options, as there’s several different routes that groups can take to gather enough anima needed to activate the first boss. The latter half, though, is a suspenseful march to the apex of the dungeon where Lord Chamberlain, who players encountered during the game’s campaign, awaits at the end.

The dungeon is already known for its signature moments, such as Echelon bursting through the balcony door to start the instance’s second encounter, or Lord Chamberlain tossing statues at players during the final fight. Additionally, the bosses in this dungeon are unique and thematically cohesive with what the instance is trying to accomplish. Mechanics like Aleez’s “Pulse from Beyond” and Echelon’s “Stone Shattering Leap” fit strongly with the overall tone of the instance, as well as its parent zone of Revendreth. The concept of a Victorian-era inspired revolution focused around soul-sucking vampires is a unique and narrow concept, but Halls of Atonement manages to pull it off exceptionally well.