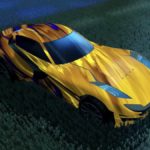 Most Rocket League players aim to break into that next tier on the ranked ladder. While you can get lucky a few matches in a row and rank up, you’ll need to practice every day to stay on top of your game. The plays you’ll make and your performance will directly impact how many eyes are on you in your matches, but they aren’t the only ways of drawing attention.

You can also shine in a lobby by decorating your car in the flashiest way possible, all thanks to the wonderful cosmetic items that Psyonix adds to the game on a regular basis. You’ll unlock a decent chunk of cosmetics as you continue to play Rocket League and you can obtain your favorite ones through trading as well.

Decals take the crown for having the most visual impact on your car since you’ll practically repaint your vehicle every time you change your decal. Decals usually decide the overall theme of your vehicle and they can also be used as a sign of prestige. Using the rarer decals in the game will allow you to show off how long you’ve been playing Rocket League, causing your opponents to think twice before the match.

Here are the best looking decals in Rocket League.

In most matches, you’ll simply wait for your moment to pop and take over the game. Considering bubbles also tend to pop in most cases, they can be an excellent way of showing that you may start playing the match of your life at any moment.

The animation on the Bubbly decal is also top notch and you can create wonderful combinations by playing around with its color palette.

Chameleon is the go-to decal for stealthy players. It has a camouflage effect and it actively alters its colors based on where you’re on the field. If you’re climbing toward the upper side of the pitch, your car will start morphing into a blue-ish color.

While you won’t completely disappear, this decal can technically make it tougher for your enemies to notice you in the most hectic moments.

Dissolver’s default model can look slightly underwhelming at first. As you start experimenting with different colors, however, you’ll realize this decal has a lot more to offer.

Dissolver’s smooth animation makes it a perfect choice for players who are looking for a decal that flies under the radar.

There will be times when you’ll just feel like you’re on fire. If you’re hitting all of your shots and are just unstoppable on the defense, you may need to suit your car up in a suiting fashion.

The Fire God decal will make it look like your car’s on fire. You’ll be able to change the color of the fire with this decal as well, making room for interesting combinations.

While there’s a certain level of geometry involved in most of the decals, not all of them feature clear shapes. If you’d like a more distinguishable design, Hex Tide might be just for you with its boxy design.

It’s possible create some fun designs with this decal’s color palette and combining it with animated wheels can let you stand out more in the field.

Interstellar is a rather controversial decal in the Rocket League community. While some players don’t like the level of detail on the decal due to how distracting it can be, there will be players who’ll appreciate having the galaxy float around on their car.

With different colors, this decal can make your car pop and you’ll technically be a star on the field since there will be countless of them floating around on your car.

Simple can be better in a lot of ways. While Mainframe isn’t the most simplistic decal in Rocket League, it falls into that category when compared to other decals on our list.

Mainframe features an animated circuit board, making your vehicle look like a futuristic goal scoring machine.

Depending on your color preference, Nergal can be the best and the worst-looking decal in the game.

While the decal looks impressively good with redish tones, it starts looking a bit off as you switch to blue-purplish tones. It can also be the opposite as well since tastes can differ.

Parallax is one of the more old school decals in the game. It doesn’t have anything to do with when it was added to the game, however. Its animations give off a retro vibe, which may make you wonder where you saw a familiar design like this.

The Parallax decal usually shines with purple-ish colors, and you can also experiment with colors like yellow to make your car more noticeable on the field.

If you can’t outplay your opponents, you may try to hypnotize them. You may start feeling slightly dizzy as you continue to look at the Rizer decal due to its smooth animation style.

When it comes to animations, Rizer is one of the better decals in the game. It’s also a versatile decal since it just looks good with every possible color combination.

There will be moments in Rocket League where you’ll go so fast your car will almost start feeling fluid. This feeling can be enhanced drastically if you also have the Tidal Stream decal equipped on.

Tidal Stream features one of the smoothest animations in the game, and it just looks breathtaking with almost all the colors, except for red.

There will be players who’ll just play like a tiger throughout the whole match. They’ll jump from one side of the field to the other without ever taking a breather, and it’ll be almost impossible at times to keep up with their pace. You can mentally prepare yourself with the Tora decal, however, since it’ll make your vehicle look like a tiger.

The blue and orange tones are the two versions of this decal that stand out the most as these two colors blend in the best with Tora’s smooth animation.